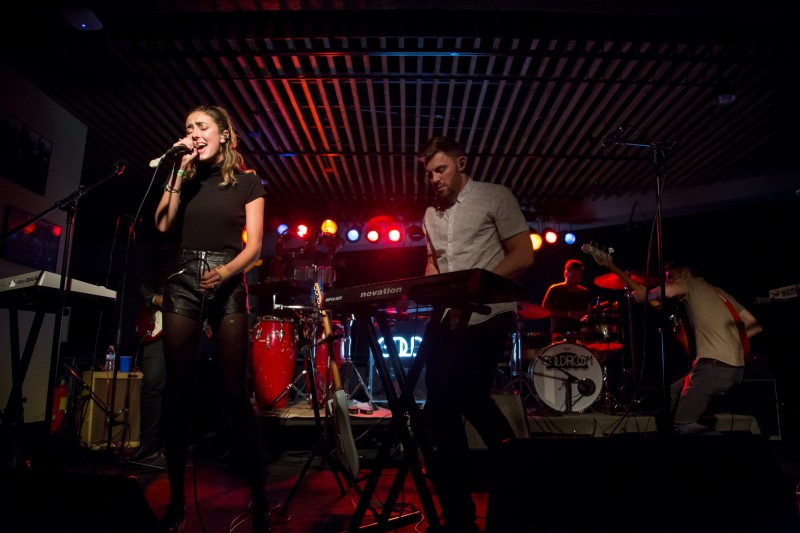 A young man approached the mixer and put headphones around his neck as he announced, “I’m just trying to get vibey.” The young man was DJ/producer Matt DiMona, the opening performer for Goldroom at the Hub. It was April 7, a Thursday night, and the venue was nowhere near its capacity. Nevertheless, DiMona proceeded to play his remix of Blackbear’s “90210.” There was a wave of head bobbing as the song played and the pace stayed moderate as he went on to play his song “I Just Want You.” After giving the crowd a taste of his own music, DiMona filled the venue with some nostalgic vibes as he played “Bartender” by T-Pain. Everyone sang along as the soulful jam boomed from the loudspeakers.

After the R&B hit was over, it was clear that everyone was ready for more. At this point what was once a room filled with a few heads bobbing back and forth was now one with the nightclub aesthetic. A slight pause went by, and the words “Your love is fadin’” filled the room as the song “Fade” by Kanye West came on. The audience rocked back and forth with intensity as the funky vibrations shook the room. Not only was DiMona able to make great use of one of West’s newest songs, but he also managed to resurrect the sensational music of R&B artist Frank Ocean as he played his song “Lost.” The crowd yelled in agreement with the DiMona as he questioned “Yo, when is Frank Ocean going to drop that album though?!” 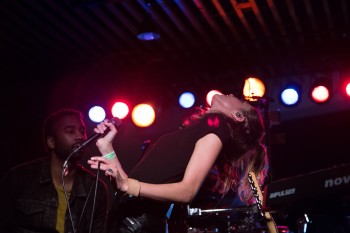 As DiMona made subtle transitions between electronic and rock music — ranging from from Blood Orange to music with a much more house-like feel — the energy levels only became higher and more intense. It was clear that DiMona was feeling the liveliness of the crowd, seeing as he was jumping up and down and encouraging those around him to join him. Just as the crowd thought he was finished, the DJ yelled, “Yo, you guys down to listen to a song I’ve never performed before?” Of course, the audience yelled in excitement as his never before heard tune came on.

It was a bittersweet ending to an amazing set list, but the night was not over at the Hub. Goldroom had yet to reach the stage but everyone continued dancing, keeping the upbeat mood alive. The tone was set in stone as the Goldroom crew proceeded to set up their variety of instruments.

There was a unique array of sounds infused throughout the venue as the six-person group began their set for the night. The musicians began the night by performing their song “Only You Can Show Me,” and as the audience engaged themselves in the sensational sounds that the tropical band had to offer, it was clear that the Gauchos were digging the music.

“Her voice is crazy!” yelled one of the audience members in reference to the female vocalist. For a brief moment the singer stood in the middle of the stage, and as she sang “Till Sunrise” the melodious lyrics pierced through the crowd and echoed throughout the venue. Josh Legg, the mastermind behind the production and lyrics of the music Goldroom has to offer, has stated that he enjoys switching up the musicians for his live performances. It makes for a unique show with unpredictable outcomes seeing as everyone is artistic and skilled in their own way.

Along with the beautiful vocals that Goldroom provided came the energetic instrumentals. From the drums, guitar, bass, keyboard and even the chimes, every instrument played a crucial role in the live performance. It was dance music with a serene and passionate feeling throughout the crowd. Although it was a bit awkward when Legg announced, “Find somebody to make out with,” as the song “Fifteen” came on, there was a sense of relief when Goldroom played what was deemed to be a new song called “Breaks.”

“Thank you, you guys are beautiful!” said Legg as he and the rest of the group made their way off the stage. However, that was not enough for the Gauchos on that Thursday night; they fiended for more, and as they yelled, “Encore!” over and over again, Goldroom came back to the stage to perform one last song for the deserving audience. In an interview a few days prior to the concert, Legg stated that a good crowd for him is one that is not “cool” but is willing to embrace the music, dance and have fun. That night, the Hub’s audience, without a doubt, met his expectations. 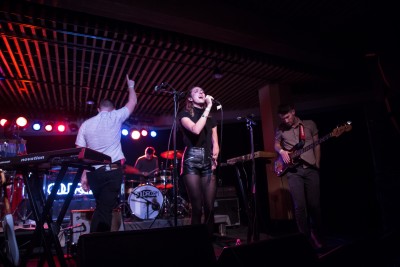