The Daily Nexus
Sign of the Times
Struggling to Resemble a Democracy
April 14, 2016 at 5:00 am by Sebastianne Kent 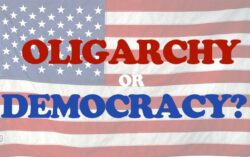 In case you haven’t heard, it’s an election year. Every election that occurs is touted as the election that could potentially determine the future of our country, but in this case it could very well be true. For many of us in university, this is the first election by which we feel as though we’re really affected, and we have a vested interest in electing a candidate who will speak to our needs and assure our futures in a time of violence, climate change — both current and prospective — and threats on women’s rights. Underlying the understandable angst surrounding this election is a national frustration and feeling that many citizens aren’t being listened to. The middle class is disappearing and so is our voice. With the word “superdelegates” as ubiquitous as it is and with corporations outspending citizens in the funding of candidates, I think it’s important to ask — regardless of your party affiliation or candidate preference — do you think we are still a democracy?

Superdelegates are delegates who decide on which party candidate to vote for independently of the will of voters. This is actually something that isn’t new — in fact, party nominees were chosen by party elites up until 1972; only after that point were party nominees decided by the popular vote. However, the superdelegate system was later added to put a check on the will of the voters so more experienced party members could support a nominee they felt would have a better chance in the general election. In this election specifically there’s a lot of scrutiny placed upon this system — mostly because it’s the first time many of us became aware of it.

While some use the excuse that it’s a system that has existed for a significant amount of time and therefore isn’t broken, I’d like to assert that just because a system has deep roots it doesn’t make it a good one. In fact, regardless of how well the system works, I believe it is undemocratic. Sure, that isn’t always a horrible thing. If there were an executive action enacted tomorrow that got our climate legislation to the point it needed to be to significantly cut our emissions levels, I certainly wouldn’t have a complaint. If a swath of laws that permanently protected women’s rights to healthcare and dismantled the factory farming industry was signed, I’d be jumping for joy in the streets. But regardless of your opinion on the merits of democracy, you must acknowledge that the superdelegate system is not consistent with the definition of democracy itself: “A government by the people, esp. rule of the majority; A government in which the supreme power is vested in the people and exercised by them directly or indirectly through a system of representation usually involving periodically held free elections,” (Merriam-Webster). We can agree that a representative given the position of superdelegate so that they can supersede the popular vote when the voters aren’t leaning in the direction that is “good for them” is problematic.

How can a superdelegate who has been in the public eye and has experienced a charmed albeit busy life presume to know the needs of the person working 60 hours a week between three jobs, with children, bills and overwhelming student debt?

I believe the reason this process is under such duress now is the difference of opinion between the superdelegates and the voters is characterized by a fundamental difference in values that are influenced by the growing socioeconomic differences between classes in the United States today. How can a superdelegate who has been in the public eye and has experienced a charmed albeit busy life presume to know the needs of the person working 60 hours a week between three jobs, with children, bills and overwhelming student debt? The gap has grown so large in the United States that the people who are supposed to represent us can’t comprehend us anymore. The people who go to million dollar fundraisers and schmooze for a living are so out of touch with the people in Flint, Michigan — who can’t drink the water that runs from their taps — that it’s laughable that they could preside over their choice for a candidate because of what they think is right for their constituents. Is it any wonder people are skeptical of the system?

In polling projections of the general election by realclearpolitics.com, Bernie Sanders polls consistently better against all Republican candidates than does Hillary Clinton.

It is also entirely likely that the reason the system is under such scrutiny now as opposed to at any other time and in any other election is that the burgeoning dissatisfaction with the political world and the campaign finance system is making people more critical of the people governing them, which they should be. When a candidate takes large amounts of money from any one person or corporation, one would expect them to lean a certain way on issues that their donor has an interest in. After all, wouldn’t a donor choose to finance someone whose views are somewhat in line with theirs? In that case, it’s hard to know who your candidate is listening to: you or the corporations that are financing them. Superdelegates are an interesting factor when thrown into the mix. They’re often established party elites, and in this election —for those who criticize them — the issue is that they not only seem to be leaning towards the candidate that represents the party elite but that they seem to be ignoring the polls in order to do so. In polling projections of the general election by realclearpolitics.com, Bernie Sanders polls consistently better against all Republican candidates than does Hillary Clinton. If the superdelegate system worked as it claimed it does, the superdelegates would be rushing to support Sanders to ensure a democratic lock in the general election.

Here’s another word defined just so we’re all on the same page: “Oligarchy: Government by the few; A government in which a small group exercises control esp. for corrupt and selfish purposes,” (Merriam-Webster).

Regardless of your ethnic background, if you’re a citizen of the United States there are people who bled to give you the rights you currently have.

Now, I’m not a conspiracy theorist; I don’t believe that every member of government is bad, out of touch or out to get us. But I do think that our government is starting to resemble an oligarchy more than it does a democracy. If we as a collective decide that our decisions are going to be made by a select few, let’s at least make sure they’re highly educated and venerable people. Instead, we have people who don’t believe in climate change making decisions for us while having oil money funneled into their back pockets by the Koch brothers while we all look away and whistle to ourselves. The point of this isn’t to praise or condemn any one candidate; my affiliation shouldn’t matter for the purpose of this article because this isn’t about partisanship — it’s about the entire system. Regardless of your ethnic background, if you’re a citizen of the United States there are people who bled to give you the rights you currently have. They weren’t handed to us, and the struggle to give our democracy strength has forged our national identity into something strong — even while we come from many different cultures. This struggle should not be taken lightly, and even in the midst of all the problems we face on a daily basis, we’ve found ourselves faced with another one. If we don’t protect the democracy we have and fight for more honest representation, those rights and our precious democracy will be taken away from us. Once it’s gone, it will be much harder to get back.

The United States has never been a Democracy. It’s always been a Republic. Elective representatives of the citizen body make the decisions, not the people themselves. And those elected representatives are not beholden to vote their constituency, so it isn’t even an indirect democracy. They are elected and entrusted to make their own decisions seeing as they have for more engagement with and information on any given vote than the people do. No law is ever passed by the citizenship. That’s how we choose the American Idol, not how we govern the country. In fact, I’d argue the current system… Read more »