The Daily Nexus
On the Menu
Culinary Confessions of a College Freshman
April 14, 2016 at 5:00 am by Annie Golay 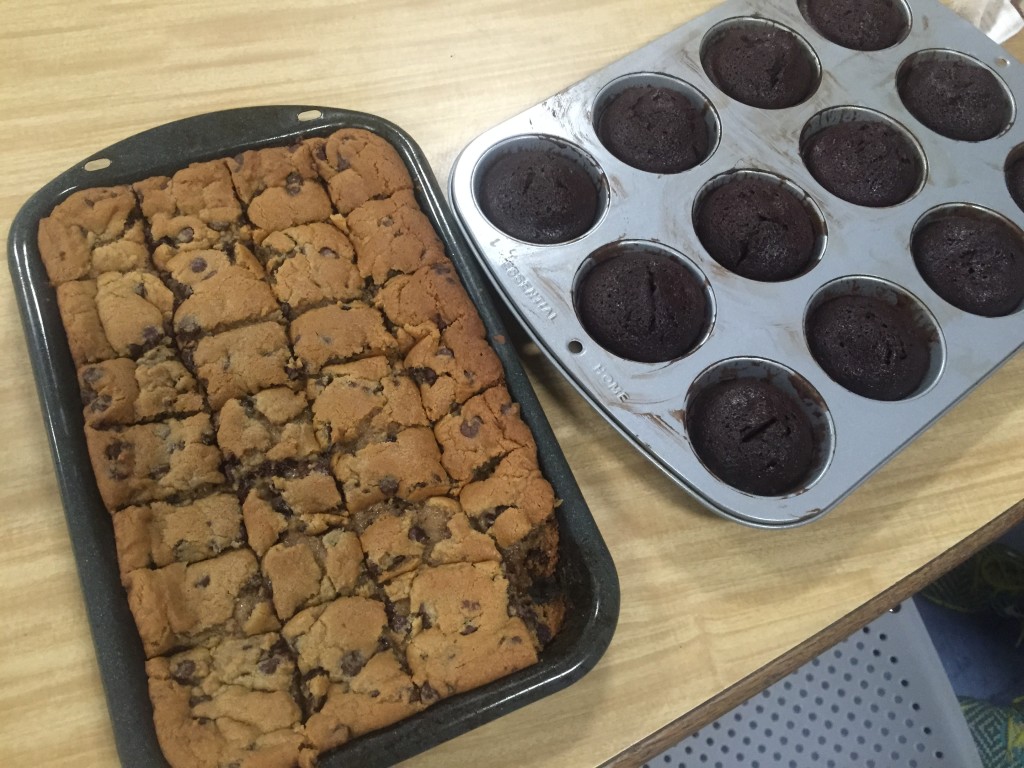 College cooking is essentially associated with quick, easy and cheap meals. Instant food — think ramen noodles and Easy Mac — are among the most popular, especially in on-campus housing. In the dorms, it is nearly impossible to exert a semblance of creative control over one’s meals. Last Friday, my friends and I sought to defy this assumption by attempting to bake cookies and brownies in the dorms. While cookies and brownies don’t exactly constitute a meal, we lacked the storage and refrigerator capacity needed to create anything that could be considered “balanced.”

5 p.m. We decided to meet in front of the DLG Dining Commons to walk over to our friend’s car and begin shopping for all the necessary ingredients. Our first stop was Costco. Originally, we planned to use the bulk containers of cookie dough and brownie mix as guides for gathering the necessary individual ingredients needed for these recipes, but soon realized the impracticality of this goal.
After meandering through Costco and taking full advantage of the host of samples available, we left with a large tub of frozen Toll House cookie dough and a four-batch box of triple chocolate Ghirardelli brownie mix. With our immediate hunger temporarily satiated, we headed to Trader Joe’s to pick up a small carton of eggs and canola oil.

6:30 p.m. When we arrived back on campus, we began collecting the necessary equipment. As college freshmen with dining commons meal plans, we lacked the essential baking sheets, mixing bowls and measuring cups. Fortunately, the front desk of each of our dorm halls carries a small supply of these materials which residents can temporarily borrow in exchange for their access cards. By pooling together our resources, we were able to find a small, albeit slightly greasy baking sheet, a large measuring cup with a broken handle, a plastic rice paddle, a cupcake tin and a borrowed metal spoon courtesy of my roommate. It felt like “Chopped” for cooking utensils.

7 p.m. With our supplies gathered, we decided to try the kitchen on my floor in San Nic. Upon reaching the floor kitchen, my friend looked dismayed by what she deemed my “janky” kitchen. While at first glimpse, the kitchen looks like a shrunken version of an old, greasy diner, I thought it showed character. However, after noticing the crusty Tupperware containers littering the already narrow counter space and the dirty utensils strewn across the metal cabinet beneath the sink, I saw her point. We headed over to her kitchen in San Miguel.

7:15 p.m. Although I didn’t want to agree with her, I had to admit this kitchen was much nicer. Though still slightly messy, it looked much more inviting than the one on my floor. After we had lain out the ingredients and thoroughly washed the cookware, we commenced baking. Because we didn’t have a bowl, we poured the brownie mix into the large measuring cup, eyeballed the oil and water measurements and mixed everything together. Coincidently, the measuring cup proved to be perfect for pouring the batter into the cupcake tin. After we set the brownies in the oven to bake, we moved on to the cookie dough. During our journey across dorms, the cookie dough had softened to a perfectly malleable texture. Since the cookie sheet was too small to efficiently make individual cookies, we decided to make cookie squares instead. Using the rice paddle, we dug up the softened dough and evenly distributed it across the pan. As our block of cookie and cupcake brownies were baking, I rushed over to my dorm to grab a plastic knife to cut the cookies.

8:30 p.m. After everything was slightly cooled, we cut the cookies, liberated the brownies from their cupcake confines and joined some of our other friends to watch “Across the Universe.” The cookie bars and brownie cupcakes were delicious, perfectly suited for a movie night. Warm, soft and cooked to perfection, the cookie bars were sinfully sweet as they melted in my mouth. I will admit the brownie cupcakes were less dense than I had hoped, their “lighter” flavor eased my guilt over eating so many. Despite the long process and the limitations of the dorm kitchens, my friends and I were able to adjust to these constraints, exerting a solid modicum of culinary freedom in this strange environment we call dorm life.