The Daily Nexus
Volleyball
Gauchos Clinch No. 5 Seed With Pair of Weekend Victories
April 11, 2016 at 5:05 am by Ryan Burns

In its last two games of the regular season, the No. 7 UCSB men’s volleyball team upset No. 6 Pepperdine and No. 3 Stanford, earning 3-1 victories in each match, to clinch the fifth seed in this week’s upcoming MPSF playoffs.

The Gauchos finished the year 19-9 overall, 14-8 in MPSF play and are riding a five-match win streak, their longest of conference play, into the postseason. Stanford is tied for a second place standing at 19-5 overall and17-5 in the MPSF while Pepperdine sits in sixth at 13-10 overall and 12-10 in conference matchups. 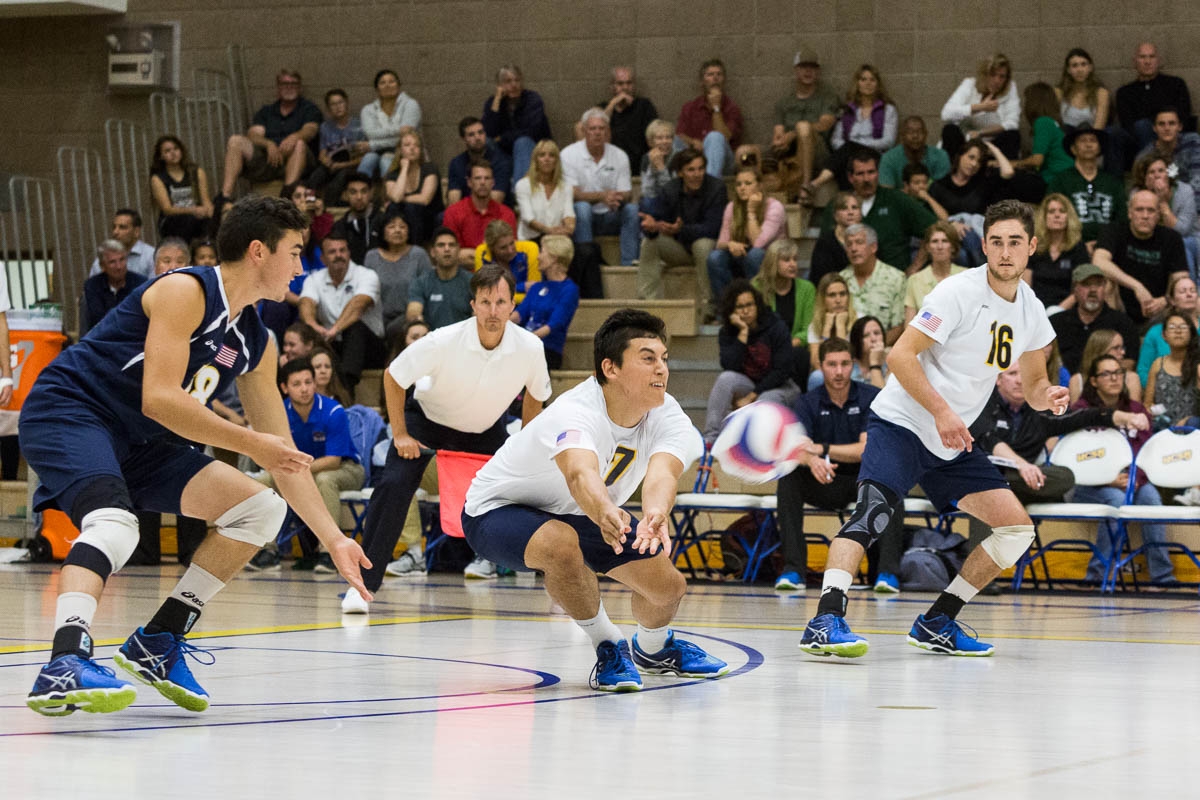 As he is about to fall over, Austin Kingi passes the ball. Dustin Harris / Daily Nexus

For the five seniors on UCSB’s roster, the Stanford meeting was the last home game of their careers at Rob Gym, and the home crowd of 500 had the building as loud as it’s been all season to properly send off the graduating Gauchos.

“It’s pure euphoria,” senior middle blocker Ryan Hardy said. “That was so surreal looking back at my parents and I’m just so happy I got to spend five years here.”

The players all gathered in front of the stands, clapping to thank the supporters, but were already looking forward to their first round matchup in the MPSF postseason, a rematch against Stanford, this time at the Cardinal’s home gym.

“We have to keep doing what we’re doing,” assistant coach Cullen Irons said. “I’ve said this before and I’ll say it again, it’s all about winning the serve and pass, and if we can keep that trend going through playoffs, great things can happen.”

Redshirt junior outside hitter Jacob Delson returned to the team’s active roster this past weekend after missing time with an ankle injury. Delson did not see any playing time however, as the plan is to preserve his health as much as possible before playoffs begin.

Despite his absence, Delson’s teammates have now won all of their games in the last two weekends while he has been sidelined, and his return will bring an extra boost for any possible postseason run. In his absence, sophomore Hayden Boehle has stepped up to play outside hitter after serving as the second-string libero for most of the year.

“Hayden majorly stepped up,” Hardy said of his teammate. “He had the game of his life tonight. He knew the middles were going to be committed on me and he stepped up and put the ball away every time.”

Prior to the Pepperdine match, the Gauchos hadn’t won an MPSF match against a team higher than them in the standings since the first couple weeks of league play.

By knocking off the No. 3 and No. 6 teams in the AVCA Division I-II Coaches Poll, the team convinced itself and any critics that it can be a genuine contender for the national championship.

“It’s a ton of momentum. We’ve been doing nothing but climbing steadily since our loss against UCLA and we’ve been building ourselves up as a team,” Hardy said. “We’re a different team now and we know what we’re playing for, so we’re going to win it all.”

For the seniors as well as the rest of the team, their chances of a late-tournament run are as good as they can get with this year’s team. With experienced veterans such as Jonah Seif leading the way, who put on a show with 47 assists versus Stanford, this year is their last chance to make history with the program.

In an interview earlier this season, the All-American setter commented on how he had never won any major title in his four years in Santa Barbara, but at No. 7 in the national rankings, likely to move up following this weekend’s wins, the Gauchos are making a name for themselves as one of the country’s premier programs.

“The guys respond to what we tell them every time,” said Assistant Coach and former Gaucho Cullen Irons. “I think they’re realizing that it’s time and they want to leave a legacy at UCSB.”

Irons led the Gauchos to the national title game in 2011, tallying 16 kills in the team’s 3-2 loss against Ohio State.

With this year’s team reaching its peak at the most pivotal point of the season, it is possible for UCSB to make a similar championship run, in which the journey begins on Saturday.

Next up for the fifth-seeded Gauchos is a road game at the fourth-seeded Stanford at 7 p.m. The teams split the regular season series 1-1, each team protecting their home court.