Thus far, it has been smooth sailing for the UCSB softball team as it will continue Big West conference play this weekend. After sweeping rival Cal Poly last weekend at home, the Gauchos are undefeated in league play at 3-0 and will travel to UC Riverside to take on the Highlanders beginning this Saturday. 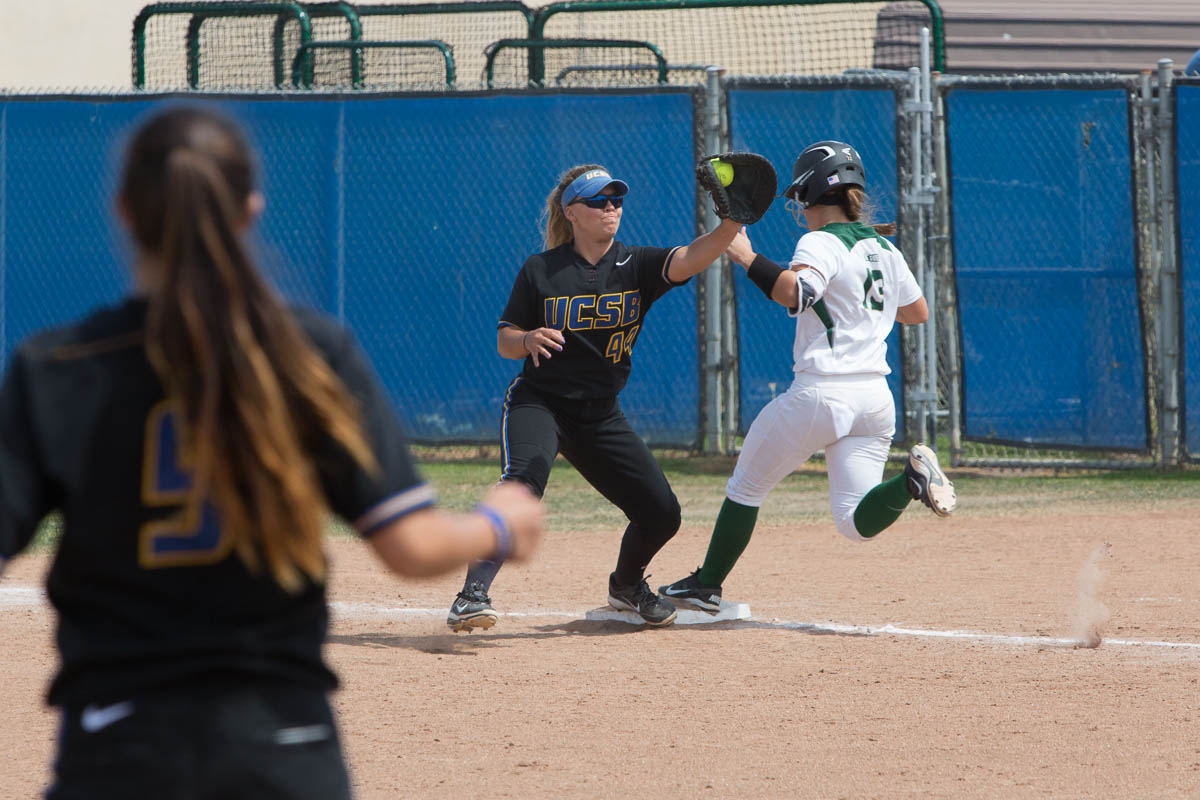 UC Riverside had a tough series last weekend being swept by Cal State Fullerton, which has left it with a current 23-12-1 overall and 0-3 conference record. UCSB enters its second series of Big West play with an overall record of 20-17.

Both teams have dominant hitters in their lineups. UCSB junior outfielder Kristen Clark continues to make things happen atop the Gauchos’ batting lineup.

She has been the ideal leadoff hitter for Santa Barbara, maintaining the team’s highest batting average at .444 and leading the team with a .504 on base percentage. She also leads the team with 29 runs scored, 15 stolen bases and 55 hits.

Holding down first base for the Gauchos has been freshman Sierra Altmeyer, in which she has hardly played like a rookie. Altmeyer has knocked in a team high 29 RBIs, hitting best under pressure with teammates on base. She has also managed to score a total of 13 runs this season in addition to tallying three home runs and a team leading 11 doubles. She has collected a total of 34 hits.

Complementing the consistent hitting of Clark, Altmeyer and Palomares is sophomore outfielder Jessica Johnston with 26 RBIs on the year and a .360 batting average.

In addition, junior infielder Emily Brucelas leads the team with four home runs and has 20 RBI’s and 22 runs scored. The five offensive players have made quite an impact on this Gauchos team and are a threat to any pitcher whom they go up against.

Nonetheless, UC Riverside is also carried by its production at the plate. Emerging for the Highlanders this spring has been junior outfielder Madeline Richard, who leads her team with an astonishing .461 batting average while scoring 36 runs and dishing out 53 hits on the season.

Sophomore outfielder Jenna Curtan is another strong hitter in UC Riverside’s lineup. She has been a solid asset for the Highlanders with a .383 hitting clip. She has 22 runs scored, 29 RBIs and 41 hits on the season.

While each team boasts strong hitting units, the two teams differ when it comes to pitching, as the Highlanders’ staff is at a disadvantage in comparison to the Gauchos’ pitchers.

Despite a 14-8 record by Highlander starter Tayler Misfeldt, she is sure to feel pressure from the Gaucho lineup. She has a 3.57 ERA and has given up 64 earned runs in 125.1 innings pitched, which closely eclipses her total of 76 strikeouts this season.

UCSB’s pitching has proven to be solid this season. Senior starting pitcher Ashley Ludlow has continued to throw consistently on the mound in 107.1 innings. Ludlow carries an outstanding 2.54 ERA, giving up only 39 earned runs and registering 107 strikeouts.

Furthermore, freshman pitcher Veronika Gulvin has nicely assisted Ludlow in the pitching rotation. Gulvin has a 3.26 ERA and has given up 37 earned runs while striking out 48 in 79.1 innings.

The two teams will first face each other on Saturday, April 9 at 1 p.m., again at 3 p.m. later that day and will wrap the series up on Sunday, April 10 at 1 p.m. All games will be played at Amy S. Harrison Field.

A version of this article appeared on page 10 of April 7, 2016’s print edition of the Daily Nexus.