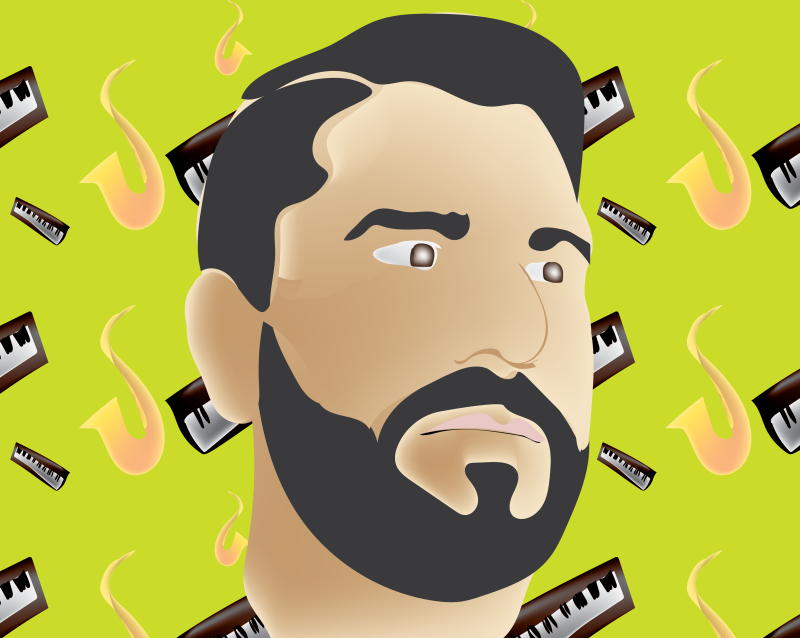 If you have ever listened to KCRW, the Santa Monica-based radio station that doubles as NPR during the day, you have likely heard one of the ultra-cool late-night DJs mention and/or play Quantic. Quantic’s unique blend of traditionally acoustic music styles (cumbia, salsa, jazz) with edgy, electronic experimentation creates the perfect ambience for cruising through L.A. at 2 a.m. Fortunately, it also makes for a rockin’ party. On Friday, April 1 the England-born, Columbia-taught, New York-based artist came to Santa Barbara to play at Velvet Jones.

Opening first was Givers and Takers, a self-described “bliss-rock” band comprised of former Gauchos. Standing at the front of the stage, lead vocalist and keyboardist Zack Greenwald wore loose, colorful clothing and a blue-and-yellow scarf around his head. He looked as if someone had tie-dyed a Hare Krishna. Givers and Takers played a relatively smooth electronic set. Most of the time, the bliss-rock label was fitting, but the band often digressed into harder chords and vocals more representative of true rock than anything particularly indie or pop.

Following Givers and Takers was Xenia Rubinos. Rubinos shares some of Quantic’s Caribbean influences, but blends these with soul, hip-hop and R&B. She herself boasts a smoky, soulful voice that’s simultaneously playful, oddly reminiscent of Kate Nash. She also used the full extent of her physicality on stage. Rubinos extended her arms out, twining her fingers together. She beckoned the audience closer and gracefully twirled her arms. With her unique vocals and movement, the singer crafts a distinct and affecting stage presence.

Finally, Quantic himself mounted the stage with his band. They all sported shirts with green and pink triangle patterns, the kind of design that would be at home on a dashiki. Quantic (aka Will Holland) maintained an unassuming stage presence. He never stood front and center, keeping slightly back and to the right, level with his drummer and saxophonist.

All three members of the band pivoted between instruments. Quantic himself played guitar and accordion; percussionist Wilson Viveros played a drum set but also hopped out front at times to rapidly beat on a single drum; regular Quantic collaborator Sylvester Onyejiaka alternated between his sax, a keyboard and a flute that he piped notes out on. Together the band fuses Latin and Caribbean vibes with electronic twists. At some point Quantic pulled out his accordion and dove into cumbia, the dance-oriented, tropical-sounding genre popular in Latin America. Holding his accordion, Quantic bounced up and down on stage, smiling widely. Later, the band played a more melodic, melancholic song Quantic called “Time is the Enemy.” The lighting designer wisely chose to bathe the stage in dark blue light. Rather than lose the audience with this more somber tune, Quantic managed to captivate them. After quite a few minutes of this, the band reverted back to a lighter, more danceable tune.

One fourth-year UCSB student, Tomek Buras, spoke with the Daily Nexus about what drew him to Quantic.

“I love the blend between the Latin and the Caribbean vibes, and I love the electronic fusion,” said Buras.

Quantic is known for his preference for sharing the stage, and Friday night was no exception. L.A.-based collaborator Jimetta Rose repeatedly returned to the stage to invigorate the show. Rose exuded a formidable and exuberant presence, calling to the audience and fiercely belting out spirited lyrics. Rose embodies soul — she howls her words. At one point she implored the audience, “Tell the person next to you ‘you’re beautiful.’ We all need to hear those words, every single day.” A guy next to me said “you’re beautiful” and held out his fist to bump. I repeated the words and bumped him, not sure if what happened was a sincere exchange of genuine human affection or just a laugh. Maybe the performers do have a mystical sway in instilling a sense of free love and community into the audience through groovy Latin vibes. Certainly one elderly hippie lady (55 plus years old) seemed to believe so as she mounted the stage and swayed about, clearly drugged-out. Velvet Jones security did not share this communal euphoria. Drummer Wilson Viveros thought it was hilarious.

Viveros as a musician is remarkable. The older Columbian man maintained a perpetually bemused look on his face as he plunged into several drum solos throughout the show, all done with lightning speed and precision.

Near the end of his performance, Quantic played music from his most forthcoming album. The beats emanating from the speaker exhibited a harsher techno, but remained highly danceable.

As his performance concluded, the audience began a chant of “Uno mas!” After a moment, Quantic came back up and spoke. “I’m afraid I’m done, due to Santa Barbara zoning laws — they’re searching people for drugs.” A moment passed. “April Fools” he said, smiling, 45 minutes into April 2 before coming back up with his band to play several mas.