The Daily Nexus
Water Polo
No. 14 Gauchos Shoot For First Conference Win This Weekend
April 7, 2016 at 5:05 am by Sinead Leon

After a tough road loss in the first conference game of the season, the No. 14 UCSB women’s water polo team returns home this weekend hoping to bounce back as it hosts No. 9 UC Davis on Saturday and No. 4 Hawai’i on Sunday. 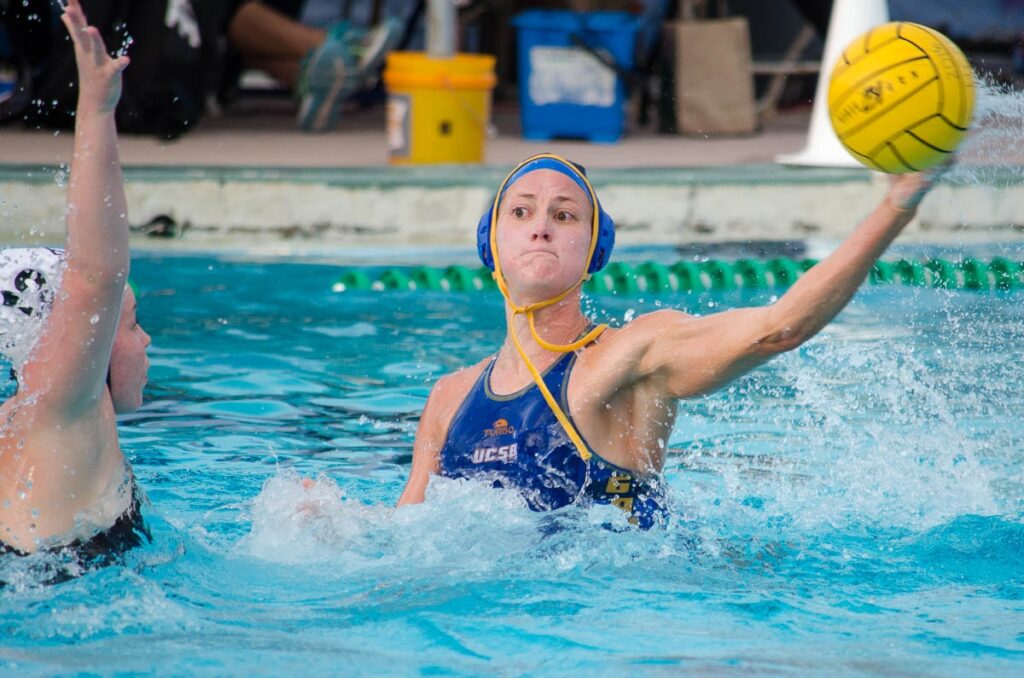 The Gauchos enter this weekend with a 12-11 overall record, and are 0-1 in conference play after dropping Sunday’s game against UC Irvine 8-5. Despite a two-point lead going into halftime, UCSB was unable to stay on top and allowed Irvine to take the lead in the third quarter which led to its inevitable loss.

UC Davis is 14-10 overall and 0-2 in conference play, tied for league worst. With 219 total goals this season, the Aggies trail Santa Barbara in team goals this season. Hawai’i, who is 17-5, leads the Big West with a 2-0 record after defeating CSU Bakersfield 16-13 and then upsetting UC Davis in overtime this past weekend.

After a rugged match against Hawai’i, which resulted in a loss in overtime, the Aggies are on the hunt for a couple of wins this weekend that will help them climb back up.

A main contributor that will help turnaround this season is senior center Allyson Hansen who has scored 42 goals this season, making up 20% of the team’s total.

Hansen was named All-Big West Conference Second Team in the 2015 season after tallying 37 goals and 19 assists for a total of 56 points.

Aside from Hansen, the Aggies will need to count on Bryn Lutz and Carla Tocchini who are tied with 34 goals each this season to help them break their losing streak.

The Gauchos other opponents, the Rainbow Wahine, will try to improve upon their four-game winning streak and remain undefeated in conference play.

Head Coach Serela Kay is no stranger to Hawai’i, as she was the Assistant Head Coach for the Rainbow Wahine two years prior to coming to Santa Barbara last season.

In 2013, Coach Kay helped the ‘Bows during one of their most successful seasons in which they won the regular season Big West Championship and advanced to their first NCAA tournament.

Aside from that history, the Gauchos have faced Hawai’i a total of 30 times in school history, mustering only four wins during that span.

To defeat UH would not only be a huge win for the Gauchos conference record since every game is crucial, but it would also revenge last year’s match which resulted in a 7-3 victory for the Rainbow Wahine.

The player to watch out for is the Barcelona native Irene Gonzalez. The freshman attacker averages 2.71 goals per games with a total of 57 over the last 21 games.

In order to succeed this weekend, the Gauchos will look to senior center Lauren Martin to set the pace early in the game as she usually does. Martin has been a great asset to the team this entire season leading the team with 40 goals thus far. She does an outstanding job at not only winning the first possession, but also finding the back of the net within seconds of playtime.

Aside from Martin, Santa Barbara has several players that create a strong offensive side for UCSB. One of them is junior utility Taylor Shore who is right behind Martin with 39 goals this season.

The other is senior attacker Bryn Hudson who knows that assists are just as crucial to the game as goals which is why she has the best balance of both with 32 goals and 34 assists.

The defense is led by senior goalkeeper Mackenzie Brokaw who is a great force in the cage making sure opposing teams have a hard time finding the back of the net. Brokaw leads the Big West for most saved goals with 175.

This weekend will prove to be a challenge for the Gauchos, however, they are presented with a great opportunity to win their first conference game as well as upset two of the better teams in the nation and prove they can compete with the best.