The Daily Nexus
News
‘Democracy Now!’ Host To Talk Media, Activism at UCSB
April 7, 2016 at 5:38 am by Nicholas Bogel-Burroughs 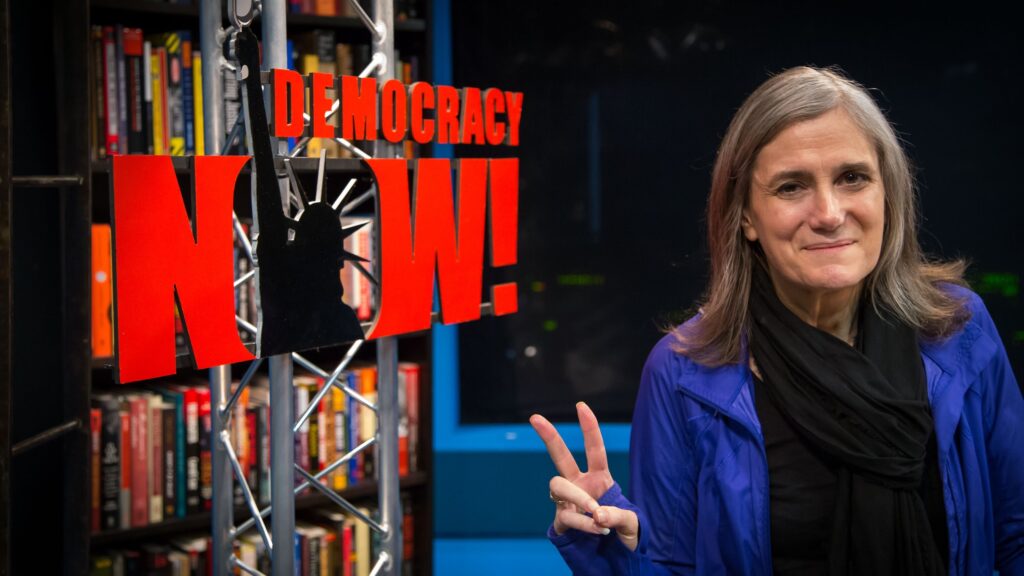 Goodman has hosted “Democracy Now!” since 1996, and for most of that time it has run on KCSB-FM, the UCSB radio station that is presenting Goodman’s talk and book signing. Goodman’s book, Democracy Now!: Twenty Years Covering the Movements Changing America, written with contributors David Goodman and Denis Moynihan, will be released on April 12.

“One of our first stops is Santa Barbara and a fundraiser for KCSB,” Goodman said in a phone interview Tuesday. “I’ll be talking about independent media in a time of war and elections and how important it is to have the media, when we cover war, that’s not brought to you by these weapons manufacturers.”

Goodman said her new book explores “the idea that it’s movements that make history,” rather than individual politicians.

“Instead of hearing the same small circle of pundits, who know so little about so much, explaining the world to us and getting it so wrong, you hear people [on “Democracy Now!”] at the grassroots, closest to the story, telling their own stories,” Goodman said.

Goodman said she wanted to make college campuses a major part of her 100-city tour because universities and student activism are central to her show’s purpose.

“We have a young, diverse audience and there’s so much happening on college campuses around the country, so it’s a critical part of what we do,” Goodman said, mentioning the Black Lives Matter movements last year at the University of Missouri, Ithaca College and more. “It is astounding how students’ voices are a key part of these movements.”

When asked about the recent chalk markings around UCSB supporting Donald Trump and disparaging immigrants and Muslims, Goodman called the slogans “extremely insulting.”

“What Donald Trump has done is really open Pandora’s box with his hate-filled rhetoric; his islamophobic, sexist, racist language; his outright encouraging violence at his rallies,” Goodman said, adding that the students’ reaction was vital to maintaining a welcoming environment.

“I think students’ reaction—banding together and saying they won’t tolerate hate on campus—is a very important one and it’s a part of a whole coalescing of student activism,” Goodman said. “I think there’s a lot of energy on campus and a lot of commitment to making change, and that’s critical to the functioning of the democratic society.”

The Daily Nexus is named after a quotation attributed to educator Robert Maynard Hutchins: “A free press is the nexus of any democracy.”

Goodman said Hutchins’ words are “absolutely” as true today as they were in 1970 when the Nexus was renamed.

“I think independent media is the oxygen of a democracy, whether on campuses or off campuses,” Goodman said. “There is a reason why our profession — journalism — is the only one explicitly protected by the U.S. Constitution, because we’re supposed to be the check and balance.”

Goodman will be speaking at Corwin Pavilion at 7:30 p.m. on Sunday. The event is free for students and $10 for non-students. Tickets can be purchased online at events.ucsb.edu or at the Associated Students Ticket Office.

A version of this story appeared on p. 7 of the Thursday, April 7 edition of the Daily Nexus.

And who will the non-Communist speaker that the will be introducing to balance out the grandmotherly Amy Goodman’s indoctrination of students?

And who will be the non-Communist speaker that the school will be introducing in order to balance out the grandmotherly Amy Goodman’s leftwing indoctrination of students, an indoctrination that ultimately is to their detriment?