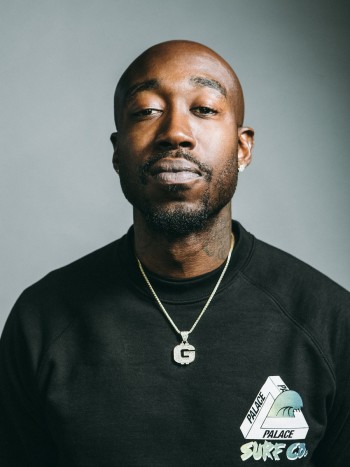 Midwestern MC Freddie Gibbs is coming to Velvet Jones this Thursday, April 7. An authentic and self-described thug, Gibbs has been hustling his whole life, whether through rapping, dealing drugs or in a more literal sense playing D1 football. He has led a high-stakes and highly dramatic life and shows no signs of slowing down. Born Fredrick Tipton in eastside Gary, Indiana, Gibbs welcomed the street life early on. After getting kicked out of Ball State, his criminal motivation kicked into high gear. He has since been arrested for gun possession, drug dealing and robbery and has even worked as a pimp. In a more 1800s-style crime streak, Gibbs crossed over to the Wild Wild West outlaw realm as he began robbing freight trains. Rap pulled him out of this lifestyle briefly when he signed onto Interscope. This venture was short lived, and after it crumbled he returned to the lifestyle he was trying to escape. Eventually he returned to rap, putting out a staggering three albums, five mixtapes and seven EPs since 2010.

While you would probably know him best from his recent song “Old English” or the Kanye remix “Cocaine Parties in LA,” his discography is as complex and extensive as his life. Whether it’s his gritty Midwestgangstaboxframecadillacmuzik (referencing Outkast’s Southernplayalisticadillacmuzik) or compilation mixtape The Miseducation of Freddie Gibbs, Gibbs offers lyrically driven, all-too-real gangsta rap. His 2014 album Piñata was a collaborative album with producer Madlib which received widespread critical acclaim and earned him a spot on Pitchfork’s Top 50 Albums of the Year. Concertgoers should expect a lot of hits from this album and his most recent one, Shadow of a Doubt a trappier, heavier album that sounds more like his older mixtapes.

In a world where everyone from the streets thinks he can rap and everybody who can rap thinks he’s from the streets, Gibbs demands the world realize a genuine street/rap crossover can still thrive. Whereas highly debatable lines like Drake’s “Started From The Bottom” make many people cringe, it doesn’t seem like much of a stretch when Gibbs refers to himself as “Gangsta Gibbs” or “Freddie Corleone.” As a man whose entourage has literally taken bullets for him, who has himself sold drugs and struggled with addiction, who has actually, seriously robbed a freight train, Gibbs has safely secured himself a position as a bona fide badass. One can only wonder how much more aggressive he’d be if he wasn’t smoking a reported half ounce of weed per day. This all being said, his show will provide an interesting perspective that most UCSB students cannot relate to while simultaneously blowing the fucking roof off of Velvet Jones with some of the most uninhibited, unapologetic rapping you’ve ever heard. Not a bad deal for $25.