For the first time in four years, the UCSB softball team went 3-0 this weekend against conference opponent Cal Poly. The Gauchos won Saturday’s opener by a score of 2-1, and carried the momentum into its later game when it won by a score of 3-0. UCSB swept the weekend series on Sunday with a 3-0 win in game three. 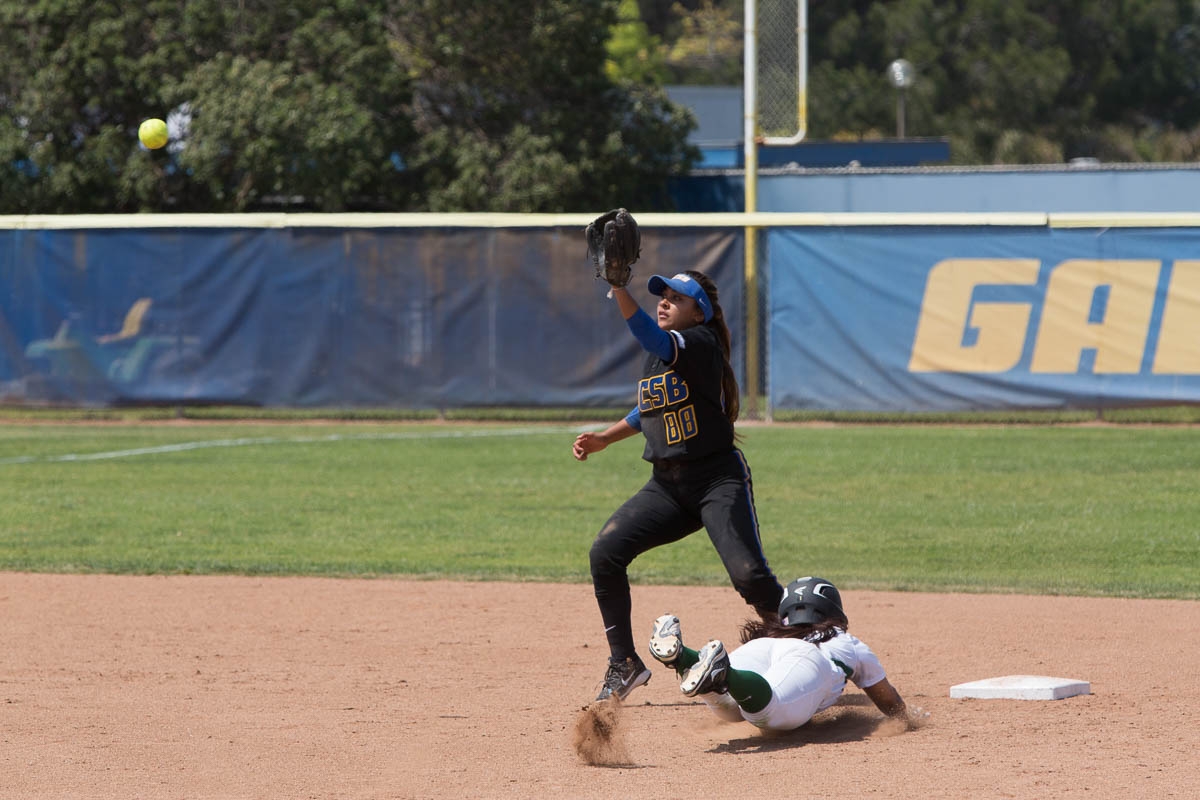 While the runner dives into second base, Melanie Menor reaches for the ball to tag her out. Dustin Harris / Daily Nexus

Following the weekend series, UCSB improved its overall record to 20-17 with a perfect Big West conference record of 3-0. Cal Poly dropped its record to 16-14 overall and is 0-3 in the Big West.

“It’s a good start to the Big West Conference.” said Head Coach Brie Galicinao. “We are really going after every game and not just trying to take a series but win all of them. Our conference is tough and it’s going to take a lot of wins to be able to come up on top.”

UCSB had incredible pitching throughout the weekend. In Friday’s game, senior pitcher Ashley Ludlow pitched a complete game allowing only three hits and one run, while striking out six batters and walking two.

“She has pitched in some big games for us this season, and even when she comes out during the part of the season where we really need our best performances she’s still continuing to get better,” says Galicinao.

Cal Poly was the first to get on the board after a wild pitch from Ludlow that hit Mustang batter Stephanie Heyward in the first inning. She eventually stole second and made her way around the bases after a single and fielder’s choice.

However, that’s all the scoring Cal Poly would see, asLudlow and the Gaucho defense held the Mustangs to only 2 singles the rest of the way, one in the fourth and another in the fifth.

UCSB also produced at the plate when it counted, scoring its two runs in the fourth with two on and two outs. Freshman infielder Sierra Altmeyer delivered a single for the Gaucho’s first run, scoring senior infielder Arianna Palomares who had singled earlier and advanced to third on junior infielder Emily Brucelas’ single.

Freshman shortstop Melanie Menor then closed out the scoring with another clutch 2 out single into left field to score Brucelas.

In game 2 on Saturday, UCSB continued to have no mercy on the Mustangs when freshman pitcher Veronika Gulvin pitched a complete game shutout, allowing only four hits, while striking out one.

Gulvin was in command the entire game, as she threw only 88 pitches in the game, 68 for strikes, and allowed only one batter to reach third base.

The Gauchos scored early, putting one runner across in the first inning, as Jacqueline Hinojosa scored on a wild pitch.They scored again in the third with 2 out rally when Hinojosa singled and raced home on a triple to right by sophomore right fielder Jessica Johnston.

In the sixth, they scored again on 2 hits and 2 costly Mustang errors.  The clutch hit was a single to left by shortstop Menor to score Johnston who reached earlier on an error.

In the seventh, Cal Poly mounted a rally with two singles to lead off the inning, but Gulvin forced Cal Poly to ground into a double play to end the game.  Johnston and Menoreach had a pair of hits in the game, and both were the only two to contribute RBIs.

In the third game on Sunday, the Gauchos capped off the weekend with a 3-0 victory, seeping the series over the Mustangs.  In the game it was veteran senior pitcher Ashley Ludlow’s turn to hurl a shutout.

She was dominant when they needed her, pitching a complete game three-hit gem to pick up her seventh win on the season. Ludlow struck out 6 and walked none.

The Gauchos bats came alive again, as they had eight hits in the game. Junior outfielder and leadoff hitter Kristen Clark went 2-3 in the game with an RBI and a stolen base, and Altmeyer collected 2 doubles in 3 at bats with 2 RBIs. Palomares went 2-3 with 2 runs scored, and Menor also went 2-3 with a run scored and a double.

In addition, the Gauchos played flawless defense for the entire series, and did not commit a single error in the 3 games played.  They also turned a double play on the infield.  The Gauchos are firing on all cylinders as they continue conference play.

Next up is a three game series on the road at UC Riverside with 2 games scheduled for next Saturday, and the final game of the series set for Sunday.