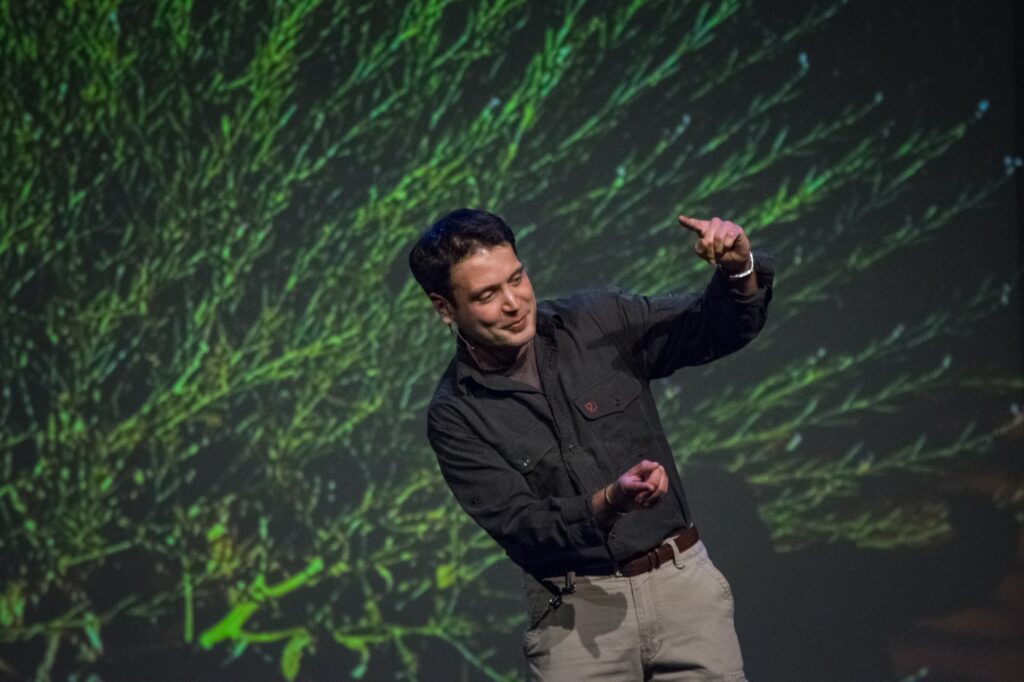 In April 2008, National Geographic paleontologist Nizar Ibrahim was on an African expedition when he and his team found “the lost giant” of the Sahara — the Spinosaurus.

Ibrahim worked in the Sahara Desert between Morocco and Algeria at the Kem Kem Beds, now a dry area but once a “river of giants.” Speaking at a UCSB Arts & Lectures event on Sunday, Ibrahim said the goal of his work was to find the bones of the Spinosaurus dinosaur, whose fossils were lost in Germany during World War II.

“It’s a beautiful place, but it’s also a dangerous place,” Ibrahim said, referring to its deadly snakes, scorpions and smugglers.

The biggest challenge of the location, however, is its large, sloping topography covered with boulders, creating a difficult landscape for a paleontologist. Ibrahim said he and his team looked at geological maps of the region to find dig sites with rocks from the desired time period.

“Most of the time you find isolated teeth or bone fragments,” Ibrahim said. “But all this hard work paid off when we uncovered thousands of dinosaur bones.”

Ibrahim uncovered the largest dinosaur bone in the region while on his second expedition. The bone belonged to a plant-eating dinosaur — a remarkable find, considering most of the bones found belonged to predators.

They were on their way back to Marrakesh when they stopped in a small town on the edge of the desert and a local fossil hunter approached them. The fossil hunter presented Ibrahim with a box of fossils, and one piece in particular caught his attention.

“A blade-shaped piece of bone with a big, reddish line running through the middle — I had never seen anything like this before,” Ibrahim said. At the time, Ibrahim suspected that the fossil belonged to the Spinosaurus dinosaur.

A short time later, while at the Milan Natural History Museum, Ibrahim’s jaw dropped when he saw big, long spines, a foot and leg bones with the same design as the one he acquired in Morocco. “We thought finally we might have a partial skeleton of a Spinosaurus,” Ibrahim said. “That meant I had to find the man with the cardboard box … the man in the Sahara Desert.”

Ibrahim said the local fossil hunter was the key to locating the Spinosaurus dig site, but finding him was like “trying to find a needle, not in a haystack, but in the Sahara.”

Ibrahim was ready to give up when, by chance, a man that Ibrahim recognized walked by him at a restaurant many miles away from the dig site. “It became clear that this was the man I was looking for,” Ibrahim said. Ibrahim explained to him the story of the bones in Italy and the fossil hunter confirmed that an Italian fossil collector had indeed bought his bones. Ibrahim knew he had found his “needle in the Sahara” at that moment.

Since that initial discovery, Ibrahim has found hundreds of Spinosaurus bones that have led to both a digital and physical reconstruction of the semi-aquatic creature.

Eva Clark, a fourth-grader, said her interest in paleontology pushed her to attend Ibrahim’s lecture, and she was glad to learn more about the Spinosaurus as a result.

“I definitely did not know that the Spinosaurus was a semi-aquatic dinosaur. I thought it was a land dinosaur,” Clark said. “I did not think of the possibility of it being in water, but it makes sense.”

Elsa Schmidt, seventh-grader from Balboa Middle School, enjoyed Ibrahim’s recreations of the Spinosaurus and its environment.

“It’s cool because that’s our earth’s history and it’s a good thing to know about,” Schmidt said.

“I think it’s interesting that all these pictures can re-inspire me and exceed my expectations,” Kang said of Ibrahim’s recreations. “It’s like an alien world to me.”