With the victories, Santa Barbara improved to 17-9 overall, 12-8 in MPSF play and continued its dominance at Rob Gym, as the Gauchos now boast an impressive 11-2 record at home this year. The losses dropped Hawaii to 14-11 overall, 9-11 in the conference standings as the two teams now sit at fifth and seventh in the standings, respectively. 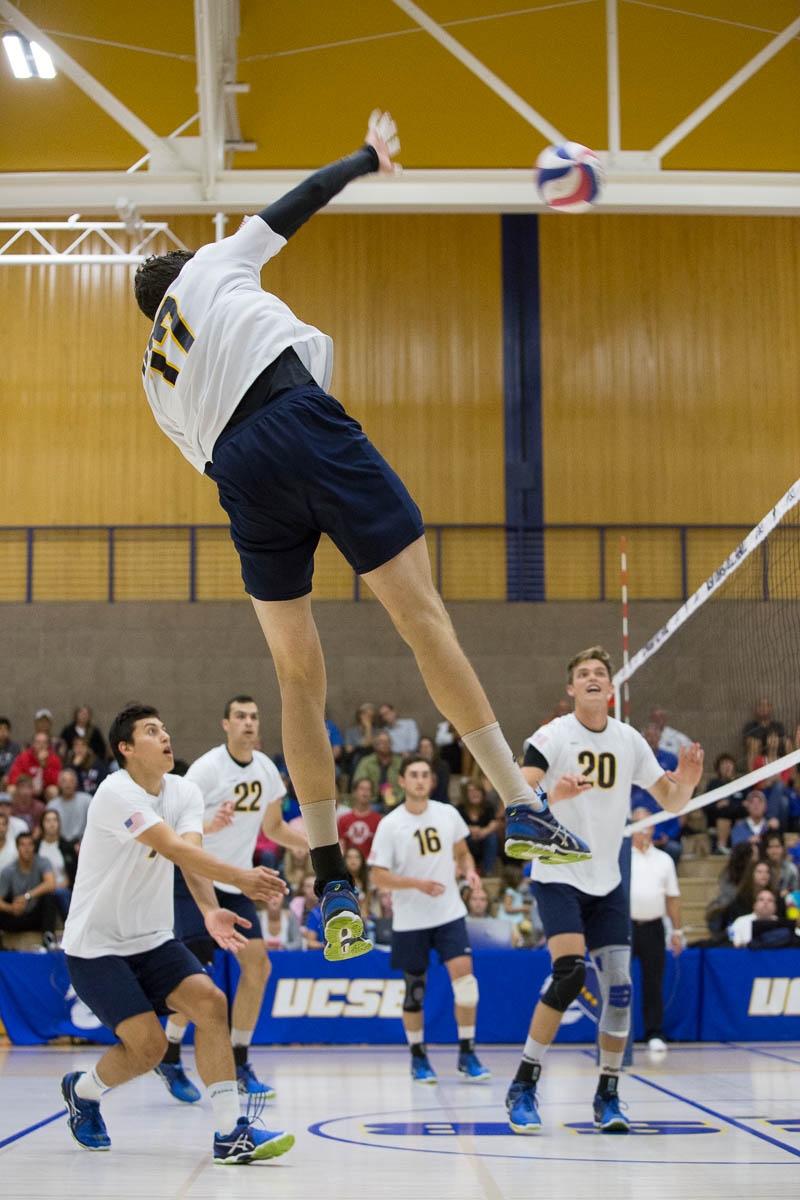 With the rest of the team covering, Matt Marsh swings through the block. Dustin Harris / Daily Nexus

Since losing three straight conference games to UCLA and Long Beach State, UCSB seems to have overcome its slump with a trio of wins since facing the 49ers.

“The Long Beach game was a bad loss, but it’s been great to see us get three quality wins since,” redshirt junior outside hitter Jacob Delson said.

Against Hawaii, the Gauchos were without Delson, who was out with an ankle injury.

The redshirt junior has been one of Santa Barbara’s primary offensive threats this season, averaging a team-high 3.29 kills per set.

However, UCSB was able to cope with its missing star thanks to a pair of strong showings from redshirt junior Matt Marsh, who tallied 12 kills in each match. Senior Austin Kingi was the only player to top Marsh’s numbers this weekend, with a team-high 13 kills on Friday.

Head Coach Rick McLaughlin was particularly impressed with how his team coped without Delson along with a couple other minor injuries in the last two matches.

“We prepared well this past week and it showed in the two matches against Hawaii. A few guys have been pretty banged up but they are hanging that well and doing what it takes to find a way to compete.”

The Gauchos will be hoping Delson has a speedy recovery going into the last week of the regular season, with the team already clinching its spot in the MPSF conference tournament.

“It’s really great to see the team come together and get wins while I can’t help on the court,” Delson said. “And I’m hoping to be back by Stanford, but being healthy by playoffs is the biggest goal I’ve set.”

Santa Barbara played with an evenly balanced attack this weekend, getting its middle blockers highly involved in both contests. Senior Ryan Hardy and redshirt freshman Henri Cherry, who together totaled 20 kills Friday and 14 Saturday, managed to make helpful contributions on the offensive end despite splitting playing time.

The Hawaii matches were also two of UCSB’s cleanest of the year, in which the team averaged 3.0 errors per set, well below their season average of 5.44. The Gauchos put plenty of pressure on the Warriors too, forcing the visitors to 24 errors in the first meeting, followed by 21 in the next match.

“We served pretty well, but the biggest thing was the small amount of errors we made in general,” Delson said of his team’s weekend performance.

The consistency shown in the last three games are just what Head Coach Rick McLaughlin has been preaching to his players all season, and the team believes it’s reaching the point it must be at in pursuit of a potential deep postseason run.

“Whenever you start getting wins at the end of the season, it means we’re peaking at the right time,” Delson said.

In their last meeting with each team, the Gauchos knocked off Pepperdine in five sets on the road, but lost in straight sets to Stanford. Allowing just two losses in home matches this season, UCSB will attempt to capitalize on its three-match win streak as it prepares for the last week of MPSF play.