The Daily Nexus
News
Controversial Trump Markings Surface Around Campus
April 1, 2016 at 5:35 am by Nicholas Bogel-Burroughs

The chalk markings, which appeared on campus throughout this week, included messages such as “Trump build the wall 2016” and “Obama is a Muslim,” among others 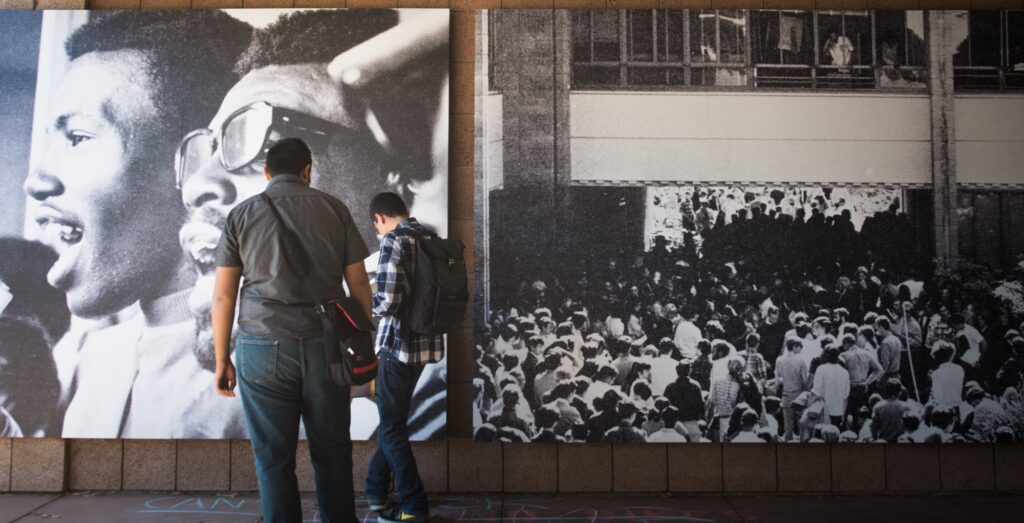 Students paused Thursday as they walked by murals at North Hall depicting the Black Student Union takeover of the building in 1968. Rather than admiring the images, however, students were staring at the ground.

“Trump build the wall 2016,” “Obama is a Muslim” and “Muhammad fucked children” were among the slogans etched in chalk throughout campus, concentrated around the North Hall mural and South Hall, which holds the Department of Chicana and Chicano Studies. On the sidewalk in front of the Asian Resource Center was the phrase, “Currency is devalued.”

UCSB maintenance staff washed much of the chalk away by Thursday afternoon, leaving only blurred marks and puddles, but many students remained troubled by the aggressive messages.

“Given the climate, given what [Donald] Trump’s name has come to mean — that it’s connected to white supremacist groups with racism — I think that was intentionally targeting [minority students],” said Zachary King, a sociology graduate student. 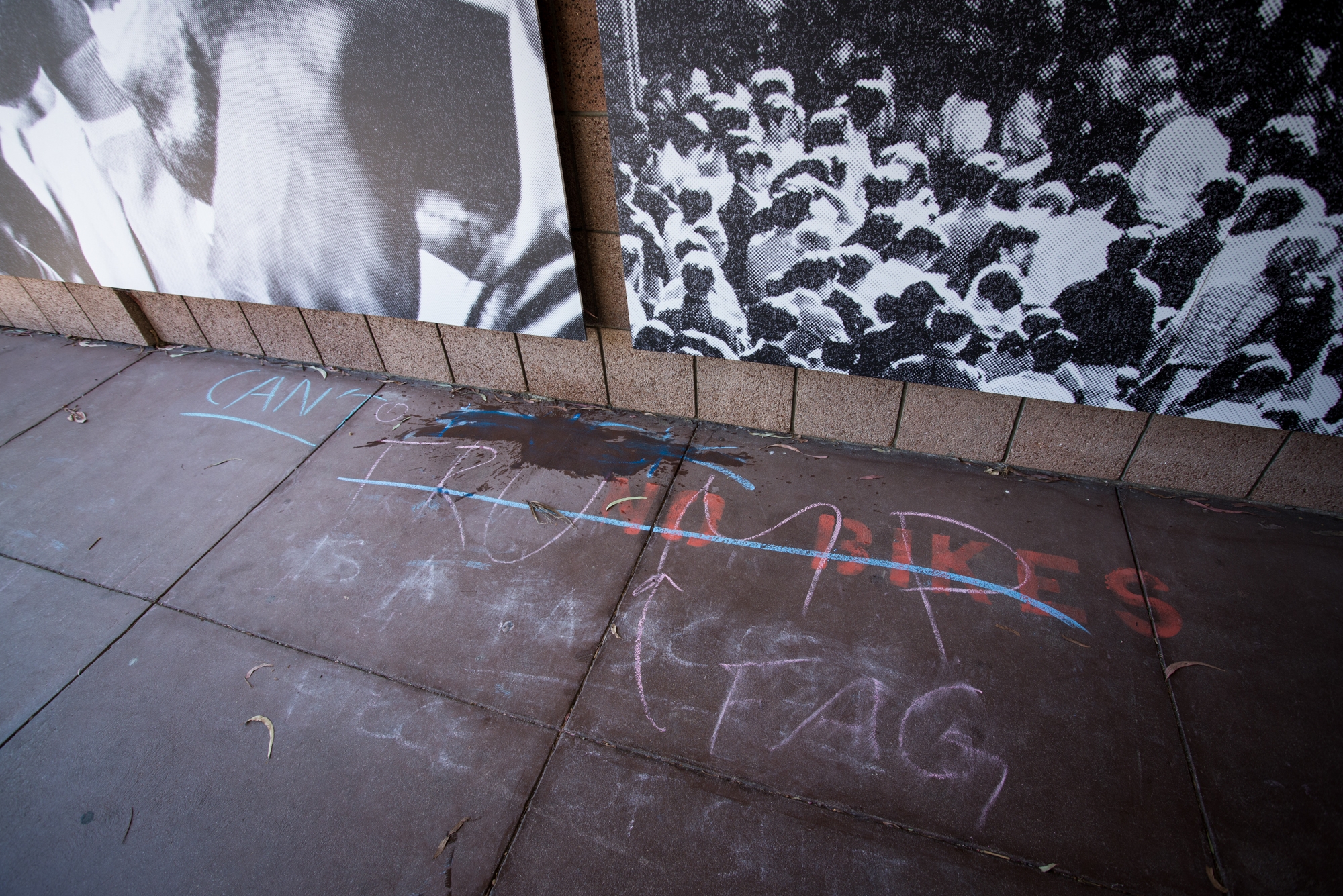 A pro-Trump slogan was crossed out and edited below the North Hall murals. Lorenzo Basilio / Daily Nexus

Nihal Hakim, a third-year economics major and a member of the Muslim Student Association (MSA), said the messages were an “isolated event” and warned of making a spectacle of the slogans.

“When these slogans and messages popped up, I wasn’t very concerned about who was saying these things because, at the end of the day, it’s just a handful of folks who were trying to be edgy or incendiary,” Hakim said. “I think giving it too much attention is giving them exactly what they want.”

Chalking sidewalks is a violation of the UCSB posting policy and can result in a maximum fine of $20 for a first offense.

The university declined to comment on the markings, but university spokesperson Andrea Estrada said in an email that “because of the numerous posting violations that have occurred recently,” the Office of Student Life (OSL) will be sending an email to all students reminding them of the posting policy and letting them know where to report violations.

Hakim said he was most worried about the marginalization of Muslim students on campus. 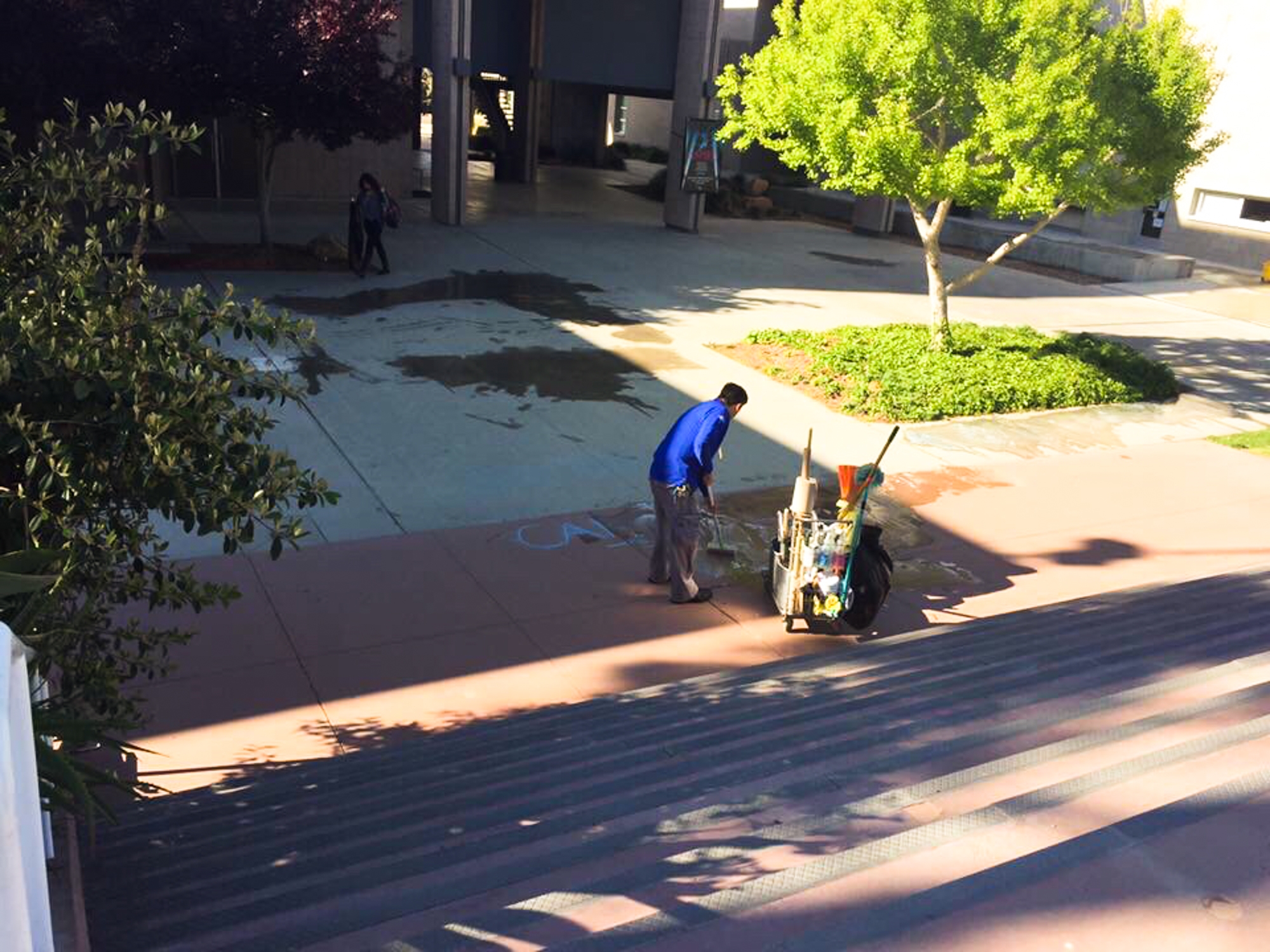 A maintenance worker cleaning up chalk on Thursday. (Courtesy Photo)

“These sorts of sentiments tend to snowball and catch an audience, but we at the MSA are confident — confident with Associated Students, with OSL, that these sorts of mentalities aren’t tolerated and that they won’t persist.”

The pro-Trump slogans first appeared earlier in the week, and several of them were edited, seemingly by other students, to say things like “Don’t Vote Trump 2016.”

Late on Thursday, two students could be seen chalking a large “Black Lives Matter” mural on the sidewalk outside of the Humanities and Social Sciences Building.

The president of Emory University in Atlanta was criticized in March by a group of alumni for what they said was his censorship of political speech after Trump’s name appeared in chalk throughout the campus.

The markings scrawled on the sidewalks at UCSB differed in that they were not just political endorsements and included lines such as “The wall just got ten feet taller” and “Sodomy = AIDS! Repent!” 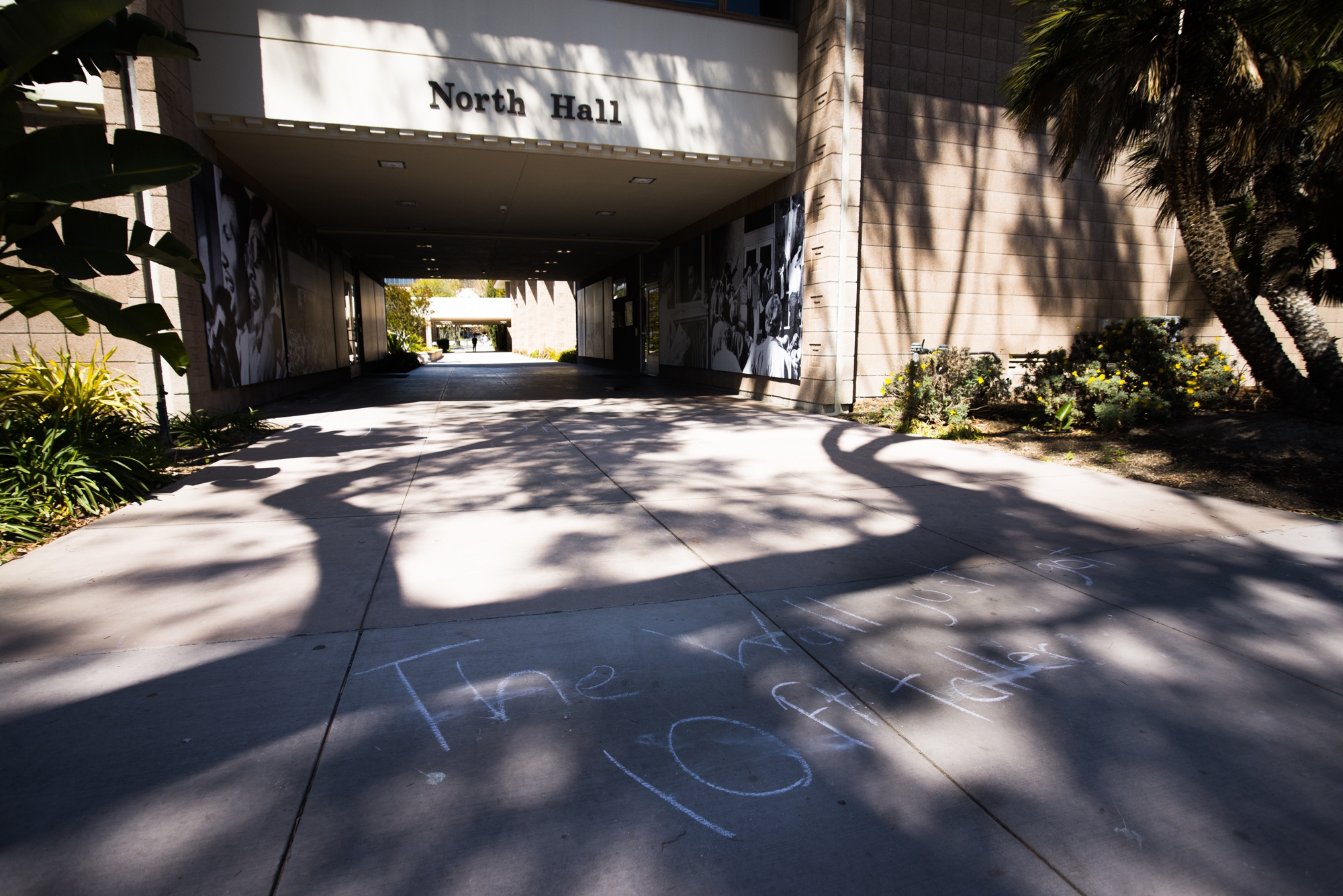 Alejandra Melgoza, a MUJER co-chair and third-year Chican@ studies and sociology double major, said the chalk messaging “does not represent our student body at all.” As a tour guide and diversity intern in the Office of Admissions, Melgoza said she worries about prospective students seeing the chalk when they visit campus.

“It concerns me to have families and potential incoming students not want to enroll into our beautiful campus due to hateful speech they may see while they walk around our lovely campus,” Melgoza wrote in an email.

Timothy Irvine, a vice president of the Graduate Students Association, said the messages were not representative of the majority of students, but that they “severely damage the [campus] climate” and “undermine” the administration’s effort to make religious and racial minority students feel welcome.

“This is a good example of how what the administration is doing is not enough to override the existing system of hate,” Irvine said. “Culturally and socially, you need to have a lot of people responding to this in a healthy way, and I think you need administrators being a part of that.”

A member of UCSB’s Black Student Union said the group would publish its response to the chalk markings in the April 6 edition of its newsletter, Blackwatch, and members of El Congreso said they plan to send a letter to Chancellor Henry T. Yang. 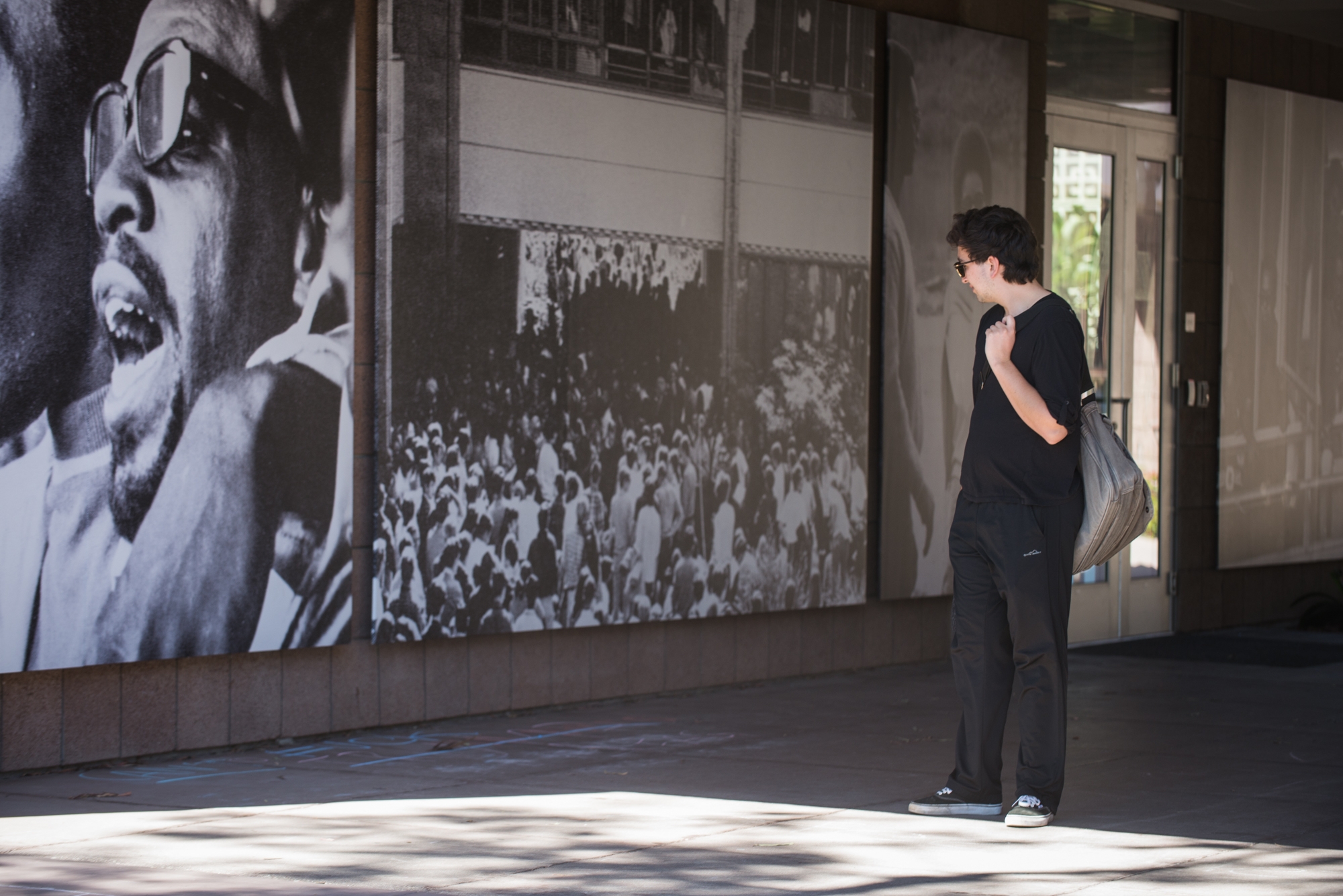 Hakim said that many Muslims have seen a similar rhetoric in the media or online, but not necessarily at UCSB.

“Overall, this isn’t something that’s new to us,” Hakim said. “It’s something that we’re used to hearing. It’s new in the sense that this is the first time that we’re seeing it with our own eyes.”

“A $20 fine for chalking the ground is what it is,” Hakim said. “Rather than anonymous chalk on the ground, we need to face each other.”

A version of this story appeared on p. 3 of the Friday, April 1 edition of the Daily Nexus.

Whoever added wrote the word “Fag” beneath Trump needs to seriously reconsider their methodology. Isn’t the whole slurring and denigrating minority groups a big reason why many people dislike Trump in the first place?

“Late on Thursday, two students could be seen chalking a large “Black Lives Matter” mural on the sidewalk outside of the Humanities and Social Sciences Building.”

So, will UCSB also investigate these students as well or just the speech the university deems undesirable? The university, as a public institution, can’t have it both ways.

“So, will UCSB also investigate these students as well or just the speech the university deems undesirable? The university, as a public institution, can’t have it both ways.”

From where did you get that UCSB is investigating any students?

“Alejandra Melgoza, a MUJER co-chair and third-year Chican@ studies and sociology double major, said the chalk messaging ‘does not represent our student body at all.'”

I don’t think you meant to have the @ sign as the o.

This is clearly those free speech dorks trying to be edgy

Your university is pathetic.

I’m an alum who remembers when there were riots and tear gas in Isla Vista. There have been signs and mass protests on campus before this, and free speech is a UCSB tradition. For the Boomer generation administrators who want to silence political speech on campus in the name of their parasitical political affiliations – BOO! It’s only words guys – and under the First Amendment you don’t get to oppress your political opponents even it what they say is “uncomfortable” to you. I’ve had to tolerate your nonsense for years, now it’s time for payback. All you little snowflakes… Read more »

There is no affirmative action at the University of California. It was eliminated in public institutions in CA by initiative years ago.

I can’t believe at my relatively old age, I’m seeing “Sodomy = AIDS” on the sidewalk at UCSB in 2016. This hurts me very deeply, and I want to believe that only true ignorance would make someone of university age (if that’s who it was) write this. I’m dumbfounded but also feeling tears come to my eyes, and angry that such stupidity on the part of others could make me feel this way.

Just because something you read in chalk on a sidewalk “hurts your feelings” does NOT make it Hate Speech. It simply makes it Speech that “hurts your feelings”. Now if you truly think that you can construct a society or culture where your feelings never get hurt then you truly are living in a Fantasy World. Have any of you “college students” ever heard the little ditty “sticks and stones may break my bones, but words will never hurt me”? Guess not. All the rest of the known world had heard that ditty and accepted the lesson it teaches by… Read more »

Those are big words coming from an anonymous person who can’t even show his her face.