This past week the No. 51 UCSB men’s tennis team played three straight non-conference matches to prepare for the Big West season.

The Gauchos fell in their first two contests by the same score of 4-3 to both Boise State and Loyola Marymount before bouncing back with a 4-3 win of their own over No. 47 Denver University. 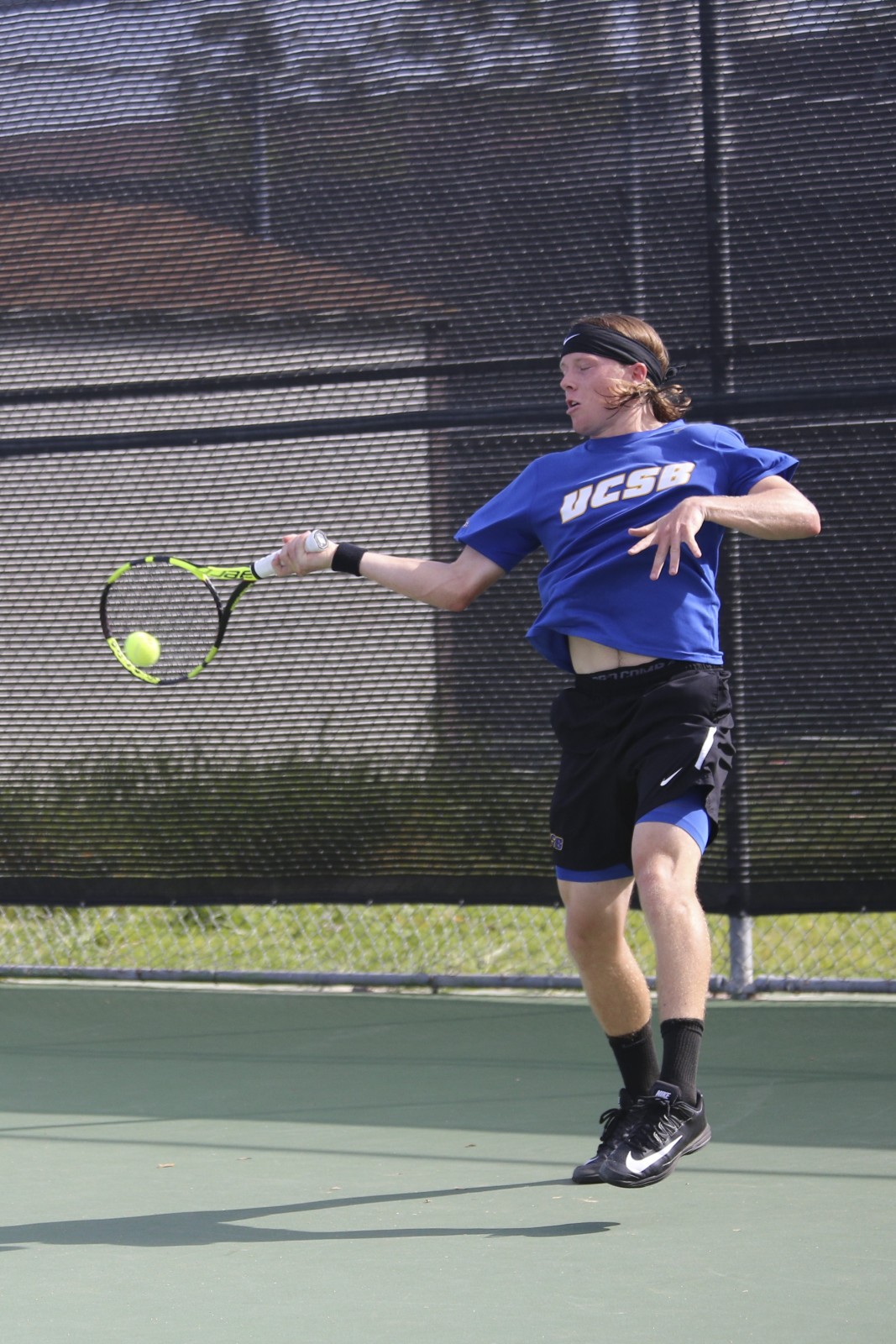 With these matches in the score books, Santa Barbara’s record moves to 10-6 overall as the team heads to conference play.

The first match of the week was a marathon for both the Gauchos and the visiting Broncos of Boise State. At the end of the four-hour contest, Boise State found themselves on top 4-3 with a walk-off victory on court four.

The match started in Santa Barbara’s favor as it took the doubles point with wins from some of the team’s veteran players on courts one and three. Junior co-captain Morgan Mays and senior Andrew Riminton were the first off with a dominant 6-2 win on court three.

The nation’s No. 34 doubles team of seniors Nathan Eshmade and Miles Seemann would seal the doubles point and a 1-0 lead for the Gauchos with a close victory of 7-5 on court one.

Heading into singles play the Gauchos would continue their success as they built upon their lead with two wins on the lower courts. Sophomore Cody Rakela and freshman Oliver Sec both captured straight set sweeps over their opponents on courts five and six, respectively, to start the singles round.

These two wins put the Gauchos up 3-0 over the Broncos and Santa Barbara would need just one more match to clinch the overall win.

With their backs against the wall, the Broncos would grind out three straight singles wins on the upper courts to tie the match at 3-3.

All three wins for Boise State were decided in tiebreakers and extra sets as the team outlasted the Gauchos. With the score tied, the decider would fall on court four where freshman Anders Holm of Santa Barbara faced Boise’s freshman Kyle Butters.

This final freshman bout would go to three sets, all of which were played in full to the tiebreaker in the end. Holm won the first set with a 7-3 victory in the break, but Butters captured the second in the break 7-5.

Santa Barbara would look to its next match on the road Friday afternoon at Loyola Marymount and in the end found the same results as the team’s previous heartbreak with Boise State. In Los Angeles, the Gauchos looked to bounce back but again were downed by one point as the Lions won 4-3.

Santa Barbara would again start out the match with a 1-0 lead as it took the doubles point with wins on courts one and three. This was the sixth straight time that the Gauchos captured the doubles round in dual match play.

The No. 34 team of Eshmade and Seemann defeated its opponents 6-2 on court one and the duo of Mays and Riminton would seal the point with a 6-4 win on three. It has now been 10 matches since Eshmade’s and Seemann’s last doubles loss and they have registered eight wins over that time.

Santa Barbara continued its success early in the singles round winning two of the first three completed matches.

Rakela added another win on court five, giving him his fifth straight, as he took a one-sided victory of 6-1, 6-2 only dropping three total games in his sweep. After dropping a match on court six, Eshmade added a singles win for his team in sweeping fashion on court one.

The senior player took a 7-6(7-3), 6-2 win that put the Gauchos up 3-1. Santa Barbara would once again look for just one more singles win to clinch.

Trailing by two in front of their home crowd, the Lions would rally winning the next three singles matches to give them the overall win over the Gauchos 4-3.

The final two matches on courts two and three came down to three sets and LMU was able to outlast Santa Barbara, as the nation’s No. 51 team took its second straight loss by one point in walk-off fashion. UCSB would return home to face No. 47 Denver on Sunday afternoon.

The match with the Pioneers was all too similar for the Gauchos, but this time it would be Santa Barbara that came out on top 4-3. This win snapped the team’s two-match skid and could not have been timelier versus a ranked opponent.

The Gauchos got out to a slow start on Easter as they dropped the doubles point falling on courts one and three. The freshman squad of Holm and Nicolas Moreno de Alboran would capture the team’s only doubles win with a 6-4 outing on court two.

The Pioneers claimed the first singles match to build upon their lead, but the Gauchos would answer back winning three straight matches on the lower courts to take the late lead, 3-2.

For the third straight time, the Gauchos would look for just one more win in singles play. They turned to courts two and three, where Moreno de Alboran and Mays both played into a third set.

After dropping the second set on court three, Mays was cold in the start of the third falling behind his opponent 4-1.

Despite trailing, the team’s co-captain would rise winning five straight games to seal both his match and a 4-2 overall win for Santa Barbara, ending its short losing streak. The Pioneers would end the match taking a court two win to set the final score at 4-3 in UCSB’s favor.

The Gauchos will remain at home and will open up Big West Conference play with two matches on the weekend. They will face Hawaii on Friday at 10 a.m. and UC Irvine on Sunday at 2 p.m. Both matches will be held at the Rec Cen Courts.