The Daily Nexus
Track and Field
UCSB Track and Field Still Developing, Events at Westmont College Saturday
March 19, 2016 at 5:00 am by Duncan MacPhee

UCSB’s track and field teams will remain in local territory this Saturday as they will compete at Westmont College before heading on the road next weekend to participate in the Aztec Invitational at San Diego State University.

The Gaucho women are coming off of a winning day last Saturday at UC Riverside in a double-dual meet against the Highlanders and rival Cal Poly, while the men just barely fell short against both UCR and the Mustangs. 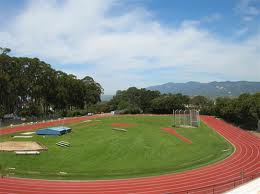 Several Gauchos put on impressive displays in Riverside, including two-win performances from senior distance runners Shyan Vaziri and Victoria Tsolis. They each came out on top in both the 800m and 1,500m races.

“Both big days for them, just showing off their good early season form,” Assistant Coach Peter Van Beurden said. “They both showed they have that speed even though we haven’t even really sharpened them up yet, so that’s a good sign.”

While numerous athletes like Vaziri and Tsolis have been electrifying early in the season for Santa Barbara, some athletes still need some practice and fine-tuning to hit mid-season form.

As most UCSB students head home for a much-needed spring break after finals this week, several motivated track and field athletes will be staying behind to get some crucial in-season work in this Saturday.

One of the events to watch this weekend is the 800m, which has several Gauchos entered in the field.

“We’re going to have a pretty good 800 race prepared I think, with senior Andrew Farkas and also some juniors and some freshman,” Van Beurden said. “[Andrew is] just coming off some illness and injury, and he actually had a pretty good first race last week so we’re looking for an even better run [from him] on Saturday.”

Farkas placed third in the 800m last weekend in Riverside, a terrific showing for his first event of 2016 as he sprinted through the finish. He will look to build off this performance Saturday as he works to get himself back into peak physical form.

While the senior works to get back to his form from previous years, several younger Gauchos will be working this Saturday to establish themselves for the first time in the track and field program.

“Some of our redshirt freshman will be racing against their teammates for the first time, which will be cool to watch,” Van Beurden said.