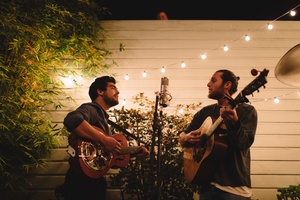 Fledgling folk band Odell Fox made Tuesday night at SOhO feel like someone crammed a stage into their living room for some sort of multi-family gathering. The parents caught up and chatted, the young adults brought their friends and dates and the little kids tried their best to maintain interest. The band — the reason for the get-together — sang comfortably, strummed confidently and spoke casually in front of an audience comprised heavily of their friends and friends of friends. As a friend of a friend myself, I was honored to be let in on this secret fan club, getting to speak with not only other sworn members but the band members themselves.

Raphael Odell Shapiro, Jenner Snow Fox and their manager/fiddler/angel-voiced songstress Lauren Tronick played a lyrically driven, bluegrass selection of melodies. Between the three of them, they incorporated a harmonica, a violin, a mandolin, a classic acoustic guitar and a gorgeous Gretsch resonator into their repertoire. Fries got cold and beer got flat as the band captivated the crowd, jumping from solo works to unreleased material, comical songs to hard-hitting ballads and selections from their album to covers of their esteemed predecessors.

The songs from their only album, Moon Shiner EP, were the most well-known to the crowd, as seen by the more dedicated fans unwittingly mouthing the words to hits like “Waiting Game” and “One at a Time.” Because of this, one would expect an aspiring, relatively unheard-of band with a fully stocked merch table set up in the back of the room to be pushing their album as much as possible. This was not the case. As Raph put it, “Songs are a very funny piece of art, because it’s something you create, and you have to play it over and over and over, and it’s not really good until you’re sick of it … and sometimes an older song will just catch you by surprise and be awesome.” Accordingly, some of the best songs of the night seemed to be the less tired-out ones not found on their album.

One such song was “GGD”, a skeptical plea with the clever lyrics, “I don’t give a good God damn because I know that God don’t give a damn about me” and “I ain’t no rabbi, buddhist, preist or pastor, but I know I got a tendency to preach.” This was immediately followed by an a cappella cover of “House of Gold”, a song so wholesomely Christian it could’ve been featured on the “O Brother Where Art Thou” soundtrack. This polar pairing left listeners unsure of what stance was being taken, or if a stance was even being taken at all. In fact, the only stance the band took very strongly the whole night was on the unquestionable superiority of Gatorade to Powerade in their aptly named song, “Gatorade.”

As far as their future goes, the band’s next move is to finish their tour and set up a new home base in Austin, TX, one of the most prominent music meccas in America. They’ll spend a few months embedding themselves in the music scene there and will then return to the “boring” jobs they have when not on tour: guiding white water rafting tours down the Tuolumne River near Yosemite (Fox) and teaching at an art school and exploring in Alaska (Odell). They will begin touring again in July, starting at the Tall Tree Music Festival in Washington D.C.

Odell Fox, as demonstrated by their SOhO performance, had all the genuine charm of an underappreciated, up-and-coming band. No money-grubbing gimmicks. No ulterior agenda. No bullshit. Just a couple of good friends playing good music with a good attitude. The treasure-hoarding hipster part of me wants them to remain underground, eternally unknown and underrated except to a proud few. The pretentious hipster part of me wants them to blow up so I can tell everyone that I knew them first. But what I feel is truly amazing about Odell Fox is that they’ll enjoy themselves either way. As they put it, “even if you play shitty shows you’re at least on a pretty cool road trip with your friends.” They therefore must be feeling fantastic,­­ because their SOhO show was everything I could’ve hoped for and then some.

Tall Tree Music Festival is in Port renfrew, British Columbia. http://Www.talltreemusicfestival.com a beautiful festival perched high above the ocean in a beautiful bay. Such an amazing band and a great group of people. Excited to see Odell Fox play again.