The Daily Nexus
Water Polo
Gauchos Stay Hot And Extend Winning Streak to Four
March 7, 2016 at 2:15 am by Sinead Leon 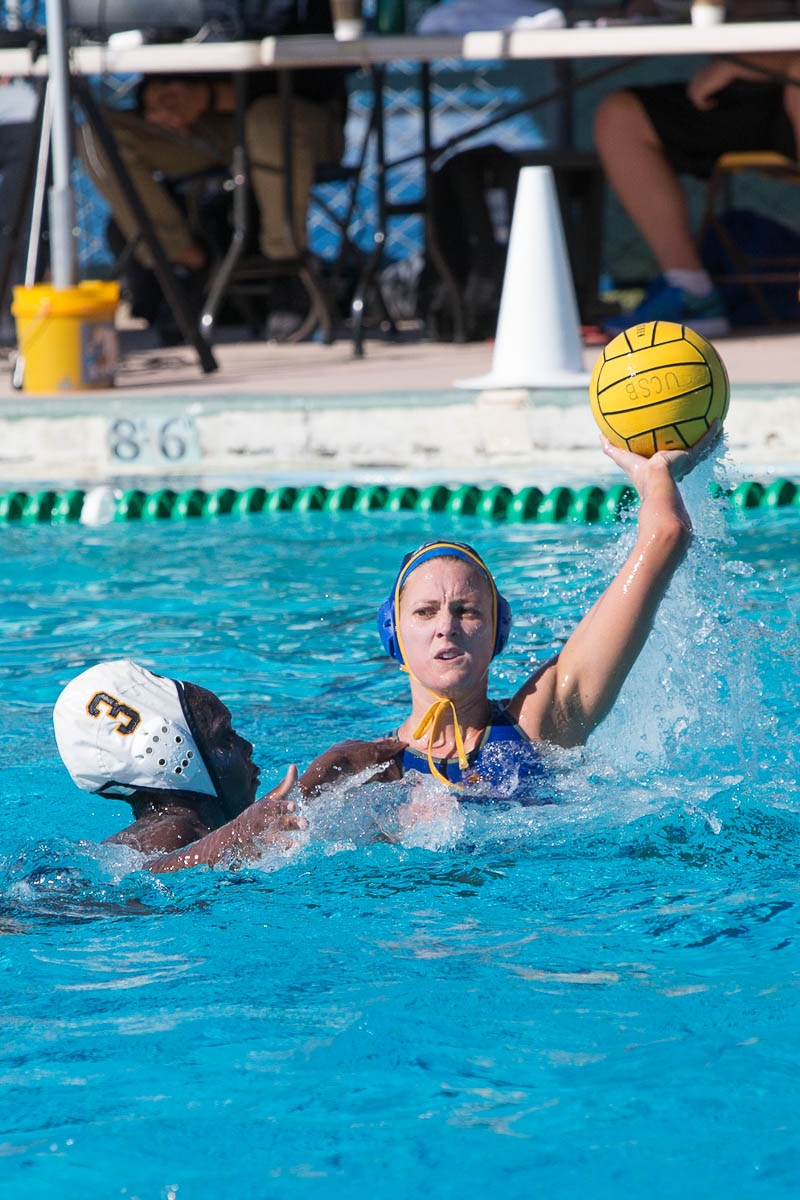 Sophie Trabucco wrestles off a defender and tries to pass. Dustin Harris/Daily Nexus

After a solid performance at the UC Irvine Invitational, the No. 14 UCSB women’s water polo team extended its winning streak to four this past weekend after dominating at the Claremont Convergence.

The Gauchos outdid themselves on what was their best offensive performance of the season yet, scoring 40 combined goals in their victories over La Verne, who is 5-2 on the season, and Claremont-Mudd-Scripps, who has a 2-8 overall record, on Saturday. Aside from improving their overall record to 11-8, it was a great way for Santa Barbara to end its last tournament before heading into conference play next month.

Morning’s matchup against La Verne got off to a quick start. Redshirt senior center Lauren Martin started the scoring at the 7:29 mark, which led to the Gauchos going on an unanswered run of seven goals in the first quarter.

Junior attacker Brenna Thomas and utility freshman Sarah Krieser each had one goal, while junior utility Taylor Shore and Samantha Murphy also had two goals each.

The momentum carried on into the second period in which Santa Barbara scored another five goals. With two goals from redshirt junior utility Miranda Schrader and a hat trick by Shore the Gauchos led La Verne 12-2 going into halftime.

Despite the 10-point advantage, UCSB was not done yet. The Gauchos found the back of the net four more times in the third quarter, after Martin scored the first two goals of the quarter, followed by Shore and Murphy who contribute one each as well. UCSB added another five goals in the fourth period to secure the victory over the Leo’s.

Aside from contributing five goals, Shore also locked down the defense with six steals in the first game, followed by Krieser and senior utility Samantha Murphy who had two each. Senior attacker Bryn Hudson and Schrader supplied the team with opportunities each having three assists, and two more came from Murphy.

In the cage, senior goalkeeper Mackenzie Brokaw and junior goalkeeper Devon Gasparini each had three saves limiting La Verne’s chances of scoring to end the game in a 21-6 blowout.

The Gauchos finished the day the same way they started it, with yet another dynamic execution, this time over co-host Claremont-Mudd-Scripps, by defeating them by a final tally of 19-1.

A total of ten Gauchos scored in the game, led by Thomas with four goals and hat tricks by Hudson and sophomore utility Elizabeth Hendrix.

In the first quarter the Gauchos scored seven goals, while Athenas scored their first and only goal of the game. By the end of the first half UCSB was up 11-1 after four goals scored in the second quarter.

Santa Barbara shut C-M-S in the second half, while adding eight more goals, making it impossible for the Athenas to come back from the 18-point defecit.

Between both games Shore scored a total of eight goals, to put her on top in the scoring column. Martin trailed her with five goals and Murphy with four, all against La Verne.

The Gauchos next match is at home against Harvard Saturday, March 19 at Campus Pool at 2:30 p.m.