In the final home game of their collegiate careers, seniors Michael Bryson, Sam Beeler, Mitche Brewe, Dajuan Smith, and John Green combined for 45 points as the UCSB men’s basketball team went on to win its eighth-straight game versus Cal Poly by a final score of 69-50.

The Gauchos’ victory secured them a fourth-place finish in the Big West standings as they ended the regular season with an overall record of 17-12 alongside a conference record of 11-5. 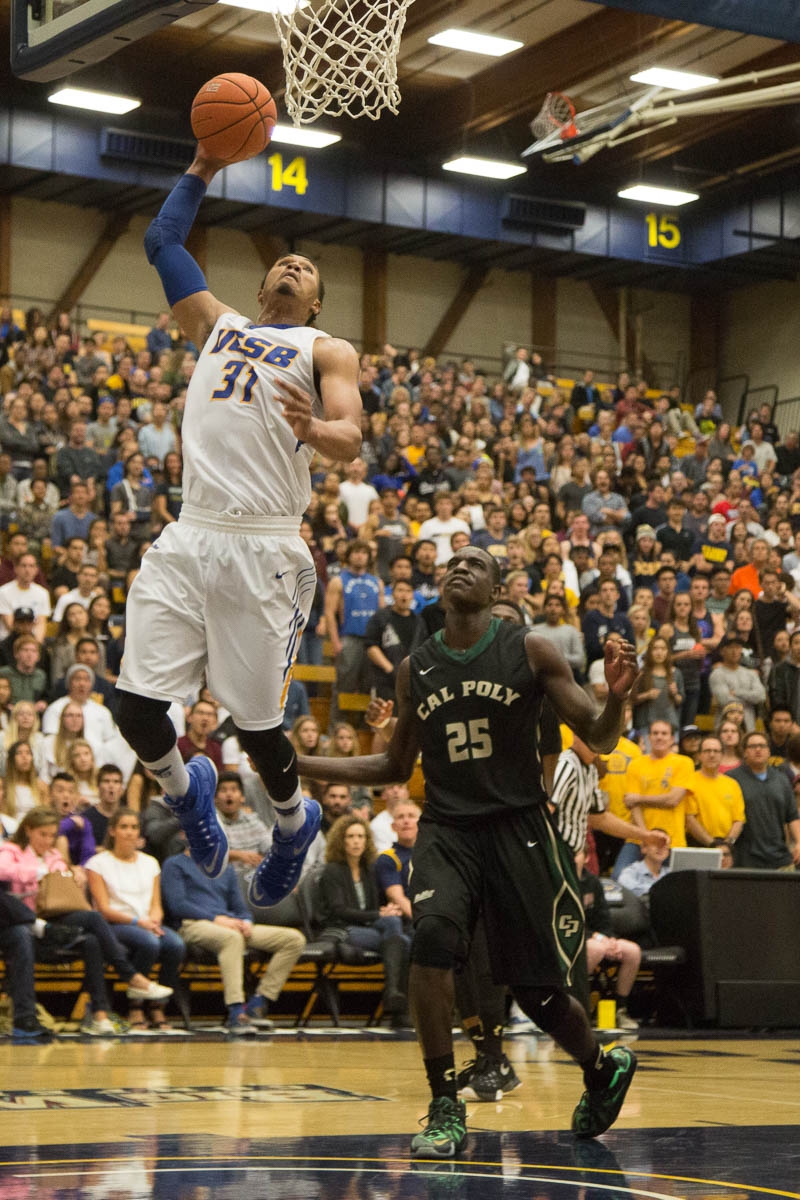 John Green dunks the ball after driving down the court. Dustin Harris/Daily Nexus

The Mustangs’ loss dropped them to 10-19 overall and 4-12 in conference play. Cal Poly finished the regular season in seventh-place.

While there was frequent scoring between both teams during the first half, as UCSB held onto a 29-26 lead at halftime, Santa Barbara held the Mustangs to an overall 27.6 field goal percentage in addition to them finishing 4-28 from behind the three-point line.

“I thought we did a pretty good job of shot selection and getting ourselves to the rim,” Head Coach Bob Williams said. “[Cal Poly] had an uncharacteristically bad shooting night from three and that gave us some separation in the game. We didn’t live at the three point line, we had some patience about getting the better shot and that’s when I think we’re a better team.”

Never trailing at any point in Saturday’s game, it was the Gauchos’ fifth time in the last six games in which they led from start to finish. Santa Barbara has also held its opponents to a 35.8 shooting percentage during its eight-game winning streak.

Meanwhile, forward John Green had arguably his best performance of the season. Leading the Gauchos’ second unit, Green finished his final home game in dramatic fashion tallying in his first double-double of the year with a team-high 14 points and 10 rebounds.

“Being able to bring John off the bench has been an unbelievable benefit to this team,” Williams said. “How efficient John has been the last two weeks takes us to a whole other level. People have to guard everywhere on the floor.”

An uphill battle for last year’s Honorable Mention, Green missed all but four games his first three years under Coach Williams. Battling a series of foot, wrist and knee injuries, the redshirt senior has worked his way back to health and emerged as a major vocal point off the bench.

“I look at my [injuries] as a learning experience,” Green said. “I just want to be a living testament for people and let him know that if you really love something don’t quit on it.”

Green is averaging 15.7 points per game in the last three games, all of which he has led or come second on the team in scoring.

Sam Beeler and Mitch Brewe had a strong senior night performance as well. The two combined for 17 of UCSB’s 20 points in the paint along with six rebounds apiece. After a few stagnant possessions on offense, Beeler beat his man down the lane and connected on a go-ahead dunk from freshman forward Maxwell Kupchak giving the Gauchos a 53-42 lead. This provided UCSB with much needed momentum.

“It’s fun playing especially when [me and Mitch] are productive,” Beeler said. “We work against each other every day so it’s great to see that work pay off for the both of us.”

T.J. Taylor and Dajuan Smith played some quality minutes and made an effect around the perimeter. Smith also contributed five points of his own, including a three-point shot from the top of the key with 11:59 to go in the first half.

Cal Poly made a late push with 5:23 to go off a made three-pointer by guard Taylor Sutlive. The Gauchos quickly responded however, as Green dished a no-look pass to Brewe for a layup to give UCSB a seven-point advantage. From then on, Santa Barbara went 5-6 from the free throw line to finish out the game.

Gabe Vincent helped seal the deal for the Gauchos. With just 34 seconds left in regulation, the sophomore guard pulled up from the top of the key rising over Minnesota-transfer Josh Martin and drained a shot from beyond the arc. Vincent tied Green’s performance registering 14 points as well.

Senior David Nwaba led the way for Cal Poly, scoring a team-high 15 points while going 9-13 at the free-throw line along with grabbing nine rebounds. Nwaba was Cal Poly’s primary offensive target the first time these two teams faced, scoring 16 points in the Mustangs’ 76-73 loss at home on Jan. 14.

In addition to their regular season sweep of their Blue-Green rival, the Gauchos clinched the fourth seed in the Big West Conference Tournament. UCSB will face UC Davis in the Quarterfinal round. Tip-off will take place at 12 p.m. on March 10 at the Honda Center.