The Daily Nexus
Sports
Season-Lows in Shooting Lead to Rough Ending for Gauchos, Lose 59-45 at Hawaii
March 4, 2016 at 5:00 am by Sean White

After nearly upsetting Hawaii in the first meeting, it was viable that the UCSB women’s basketball team could possibly defeat the Rainbow Wahine to end the regular season on Thursday.

However, the Gauchos posted their worst shooting performance in a game this season recording a season-low field goal percentage of 25 percent and an 8.3 three-point percentage. 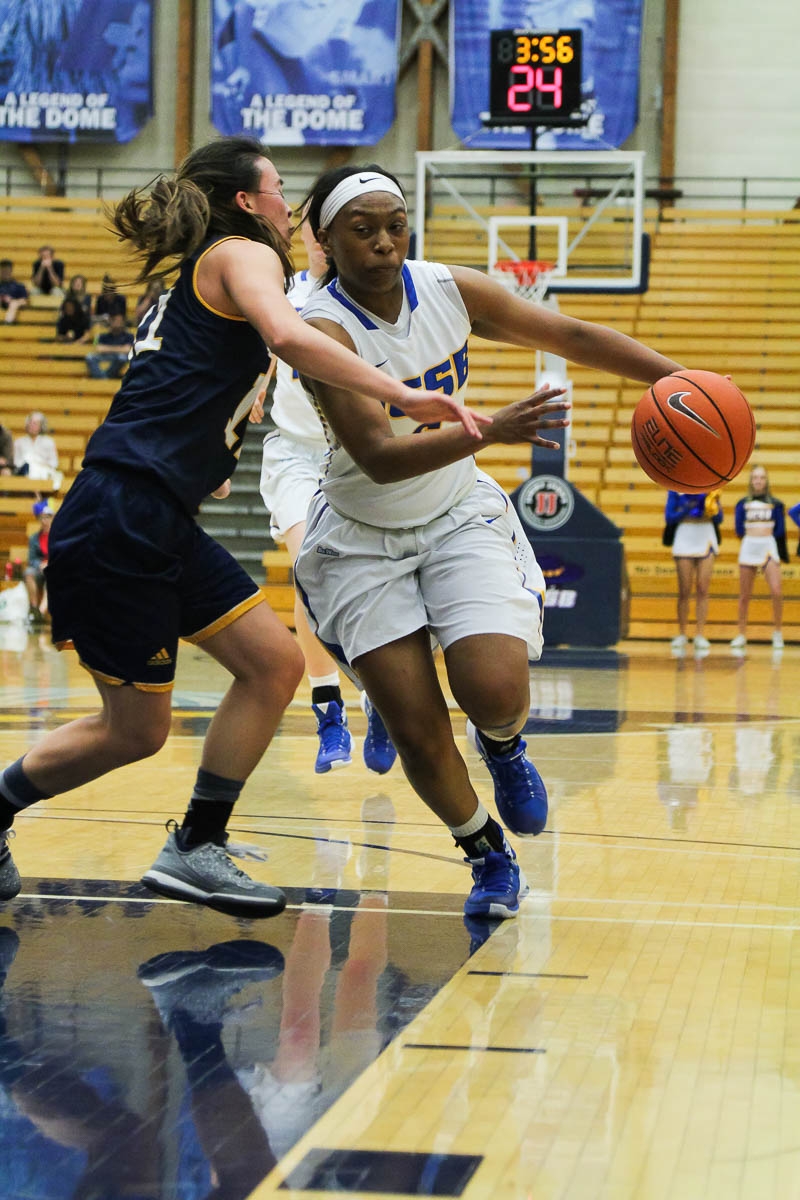 Despite forcing 19 turnovers, Santa Barbara could not prevent Hawaii’s offense from shooting 45.7 percent from the field resulting in its 59-45 loss to the Rainbow Wahine.

At the forefront of Hawaii’s shooting was senior guard/forward Destiny King going 5-6 from the field as she nearly notched a double-double with 13 points and a game-high nine rebounds. She also managed to tally three steals in the team’s Senior Night matchup while junior point guard Briana Harris led all scorers with 15 points.

Although freshman guard Coco Miller registered a team-high 13 points, the rest of the Gauchos’ offense struggled as no other player finished in double-figures.

Both teams traded buckets to begin the game, ending the first quarter tied at 13 apiece. Combining for 12 of Santa Barbara’s 13 points in the period was Miller and senior guard Jasmine Ware with six points each. King managed to keep the Rainbow Wahine in contention with six points in the opening quarter as well.

Yet, it was free-throw shooting that sustained the steady swap of points between the two teams. UCSB ended the first half 7-10 at the free-throw line while Hawaii made 6-13 attempts, resulting in the Rainbow Wahine’s 26-21 lead at the half.

While Hawaii managed to get to the free-throw line in the third quarter as well, complementing the Rainbow Wahine’s foul shooting was their 55.6 shooting percentage in the period. With five minutes remaining in the quarter, Hawaii embarked on a 14-2 run to end the third with a 44-31 lead.

Trailing by double-figures, UCSB trimmed Hawaii’s lead to single-figures at the 2:59 mark of the final period off a pair of free-throws by junior point guard Onome Jemerigbe.

However, restraining Santa Barbara’s comeback was its cold shooting hand as it recorded its worst field goal percentage of the game in the fourth quarter.

In spite of going 9-10 at the free-throw line, the Gauchos shot 2-12 from the field and 1-5 from behind the three-point in the fourth quarter.

Contrary to UCSB’s shooting struggles, Hawaii’s second half improvements shooting the ball continued. The Rainbow Wahine concluded the final stretch of Thursday’s contest with a 54.5 field goal percentage on 6-11 shooting.

In addition to recording season-lows in overall and three-point field goal percentage, the Gauchos also tied their season-low total of five assists.

UCSB will await the outcome of Saturday’s game between Hawaii and Cal Poly in order to know what seeding it will earn in the Big West Conference Tournament.

With a Cal Poly loss, Santa Barbara could secure the No. 5 seed. If the Mustangs were to win, they would be tied with UCSB at 8-8 in conference play. Since both teams split the pair of games they had against each other, the No. 5 seed would be rewarded to Cal Poly for having a better overall record.

Currently tied for the No. 2 seed with Long Beach State, Hawaii faces a similar situation. A win over Cal Poly and a loss by the 49ers could help them to secure the seed. However, if neither team loses a game on Saurday, LBSU will be rewarded the No. 2 seed due to it possessing a greater overall record.

The first round of the Big West Tournament will begin Tuesday, March 8 at 6 p.m. at the Honda Center in Anaheim, CA.