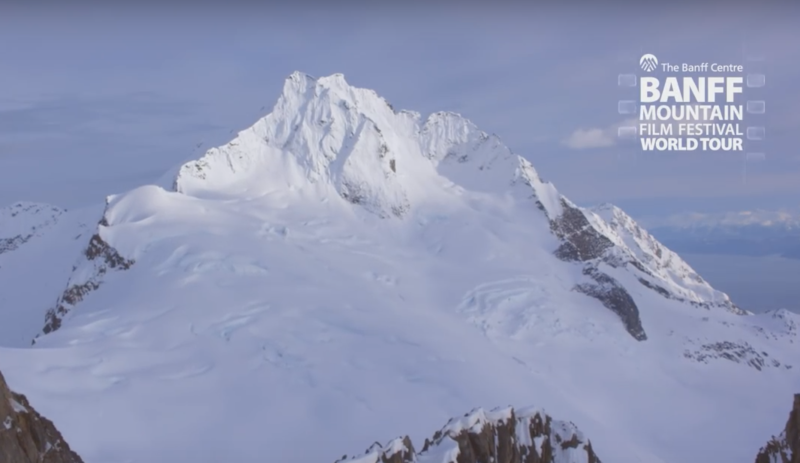 Courtesy of The Banff Centre

The word “gnarly,” commonly heard throughout the vernacular of outdoor sport culture, is defined by Urban Dictionary as, “when you’ve gone beyond radical, beyond extreme, it’s balls out danger.” The Banff Mountain Film Festival World Tour was far beyond radical and far beyond extreme. Showing the best of the best cinematography of the Banff Film Festival that takes place in Canada every year, the Banff Film Festival World Tour made a stop at the Arlington Theater downtown Tuesday and Wednesday, February 23 and 24. This epic event was hosted by UCSB Arts & Lectures for the 25th year in a row, and showed 17 short films and film excerpts demonstrating intense outdoor adventures.

Two thousand people, notably decked in Patagonia, The North Face, various flannels and puff jackets, snaked around the Arlington waiting to take their seats. This crowd was stoked to say the least. Families, large groups, small groups, teenagers and everyone in between all shared the same sense of adventure, which connected all 2,000 of us together.

Most of these people were Banff veterans anxiously awaiting more adventure in their lives. While waiting in line, I spoke to a man dressed in sandals and a blue Hawaiian button-up shirt who said that he’s attended the tour every year that it has stopped in Santa Barbara. “It’s always entertaining,” he said, “I like the mountain culture aspect of it.” He recounted films that were shown years ago, that kept him on the edge of his seat then, and clearly left a huge impact on him, as he remembered the audience’s reactions and how the footage made him feel. When I asked about how the films have changed over time, he stated that instead of seeing “a Miller ski scene,” as he described it, we now see more complex but still exciting cinema.

All 2,000 local community members and students alike were exceptionally eager to get inside, and finally the line started moving. We inched below the red marquee and into the foyer. There, UCSB Adventure Programs, a sponsor of the event, was tabling and giving out the recycled pens and the orange-yellow ombré stickers that we students know so well. We filed in to take our seats, chatter filled the auditorium, the lights dimmed and it was showtime. A reel of the event’s sponsors played and when the advertisement for Deuter backpacks was presented, the audience simultaneously yelled a German phrase like it had been rehearsed before the show. I still don’t quite know what it meant or where it came from, but it really showed how connected, involved and allegiant the audience of this film tour was.

An introductory video of the tour played, and with every breathtaking image or death-defying stunt that played on screen, you could hear gasps coming from every corner of the building. Literally the only word going through my mind was “woah.” It was only five minutes into this thing and I was already speechless. I suddenly knew why all these people continue to come back year after year.

We were eventually greeted by Shauna Strain, who works for the festival, who introduced us to all the films throughout the evening. Out of the 65 movies made and shown in the festival in Banff, 17 of the best competitors were able to go on tour.

The first film of the night was a short special edit of “Paradise Waits,” a film made about free skiing and big mountain skiing. The piercing imagery of this piece, the upbeat music and the humor really set up the night and got everyone settled in for an awesome time.

Cinematic masterpiece after masterpiece played, each being just as, if not more, stunning as the last. These films captured the spirit of mountain culture and raw adventure. Crystal-clear imagery never left the screen and constantly captivated the audience. The vivid colors of our natural world saturated the eyes of everyone there. Mixtures of blues from either the sky or ice, and deep greens from the trees or the salamanders from “The Last Dragons,” a film covering conservation efforts happening on the East Coast, filled the room. Depicting scenes of rock climbers defying the odds, ice climbers challenging themselves in new ways, paragliders breaking new records or tour guides in China introducing local children to the wonders of nature, these films provided something for everyone. These stunts were unbelievable, and had the crowd at the edge of their seats. There were even a few, “Oh shits!” interjected throughout the evening from the gentleman sitting to my right. Yet, if I had to pick a favorite, the special edit of unReal” was by far the most exciting film to watch. Telling the story of a group of mountain bikers, this slow-mo, yet action-packed movie gave me a whole new respect for mountain biking, and was filmed right here in California. The good news is that you can find all of these films online on the Banff Film Festival website.

But alongside these astonishing images of the planet was always a lesson to be learned. Many of the movies focused on the ways that we can help conserve and preserve the natural beauty of this world. These stories shared eye-opening facts about environmental degradation happening all around us, and the scary, yet true, repercussions we may face if we continue to live our lives this way. These films showed us the magnificence and power of our planet and all of the precious gifts it has to offer us, because without the wilderness we would not be able to partake in any of these outdoor sports or excursions.

I spoke with Roman Baratiak, the associate director of UCSB Arts & Lectures, who had been putting on this event for each of the 25 years it has been in Santa Barbara. He said that the main goals of this film festival were to share a love and appreciation for nature, a sense of environmental consciousness and of course, having fun. These goals were most definitely achieved, as everyone left the theater ready to learn more about people and the planet, and start new adventures of our own.

We should all try to connect more with the planet, whether it’s paragliding through the Canadian Rockies or hiking to Inspiration Point. So get outside, grab some grub, pack up the Subi and go shred some gnar.