After a 66-37 rout of UC Irvine in its final home game of the season Thursday night, the UCSB women’s basketball team was unable to achieve the season sweep of Blue-Green rival Cal Poly on Saturday. The Gauchos’ comeback effort fell short as the Mustangs defeated them by a score of 66-60. 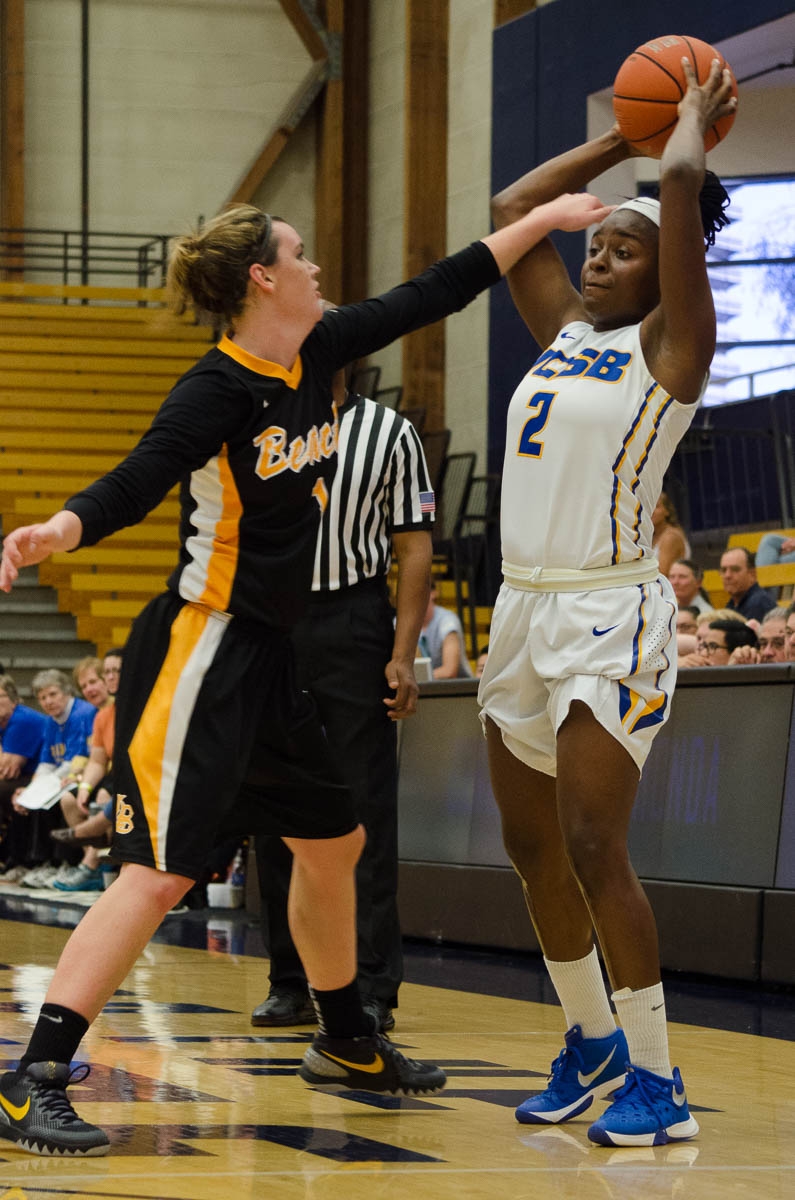 Jasmine Ware looks around the court for her teammates. Christina DeMarzo/Daily Nexus

UCSB remains in fifth-place of the Big West standings after splitting its pair of games over the weekend, sitting at 11-18 overall and 8-7 in conference play. The Mustangs are one game behind the Gauchos for fifth, currently in sixth-place with a 14-14 overall, 7-8 Big West record. After enduring losses to LBSU and UCSB, UC Irvine’s losing streak extended to eight games leaving the Anteaters with a 4-24 overall and 1-13 conference record.

Santa Barbara and Cal Poly will both end their seasons at Hawaii this week, which will help determine who the fifth and sixth seeds of the Big West Conference Tournament.

The Gauchos entered the Mott Athletics Center with a chance to sweep Cal Poly for the first time since the 2008-09 season. Despite recording a season-high 53.8 three-point percentage, UCSB nearly matched its season-high total of 27 turnovers it set in its first meeting against the Mustangs with 24 on Saturday.

An early 5-2 lead in the game’s beginning was the only time UCSB led in Saturday’s game. The small margin would not last as the Mustangs’ 60 percent shooting percentage along with a 9-1 run helped it to take an 18-15 lead to end the first quarter.

Cal Poly was most productive in the second quarter, outscoring UCSB 19-9 to enter halftime with a double-figure lead 37-24. At the helm of the Mustangs’ scoring attack in the first half was sophomore guard Dynn Leaupepe, scoring 14 of her game-high 20 points in the first two quarters. She closed out the first half with back-to-back three-pointers as she finished with 10 points in the second quarter.

Despite trailing, providing UCSB with points was guards senior Jasmine Ware and junior Onome Jemerigbe. The two combined for 16 of the Gauchos’ 24 first half points. Ware led UCSB in scoring with 14 points, while Jemerigbe concluded Saturday with 11 points and a game-high five assists. Sophomore forward Chaya Durr finished with 10 points and a game-high eight rebounds.

The Mustangs gained their largest lead of 14-points at the 9:25 mark of the third quarter with a 40-26 lead.

It wasn’t until the fourth quarter in which UCSB brought its deficit within single-figures. A layup by sophomore forward Taylor Farris trimmed Cal Poly’s lead to an eight-point margin of 55-47. The basket sparked UCSB’s 7-0 run, bringing the Gauchos within three, 52-55.

Following a layup by Cal Poly junior forward Hannah Gilbert, Farris answered with a three-pointer to bring UCSB within its closest deficit of two points at 55-57.

As the momentum gradually shifted in favor of the Gauchos, a dagger from beyond the arc by senior guard Beth Balbierz handed Cal Poly a 60-55 lead with 36 seconds remaining in the game. She was the Mustangs’ second leading scorer with 14 points on 2-3 shooting from long range.

UCSB fouled the Mustangs in the game’s remaining seconds in hope of completing its combeack, but Cal Poly shot a perfect 6-6 from the free-throw line in the final quarter to secure its 66-60 victory.

While a total of four different Gauchos scored double-figures in points, UCSB’s starting lineup struggled in its matchup versus UC Irvine.

Despite shooting 42.4 percent from the field, Ware was the Gauchos only double-figure scorer with a game-high 17 points off the bench.

Although Santa Barbara didn’t have any illustrious individual performances Thursday night, its 53 rebounds was the most it recorded in a conference game this season. UCSB outrebounded UCI 53-30, helping result in the Gauchos outscoring the Anteaters 26-8 in the paint and 15-4 on second chance points.

Nonetheless, Thursday’s victory was one of UCSB’s best defensive performances of the season as it held UC Irvine to 31.0 shooting and 14.3 three-point percentages. The Gauchos held UCI to just four points twice in the second and fourth quarters.

In addition, UCSB prevented all UCI players from scoring within double-figures as the Anteaters leading scorer was freshman guard Andee Ritter.

Farris tied her career-high of 13 rebounds in Thursday’s 66-37 win over UCI.

UCSB will play its final game of the season this Thursday, Feb. 3 at Hawaii at 9 p.m. HST.