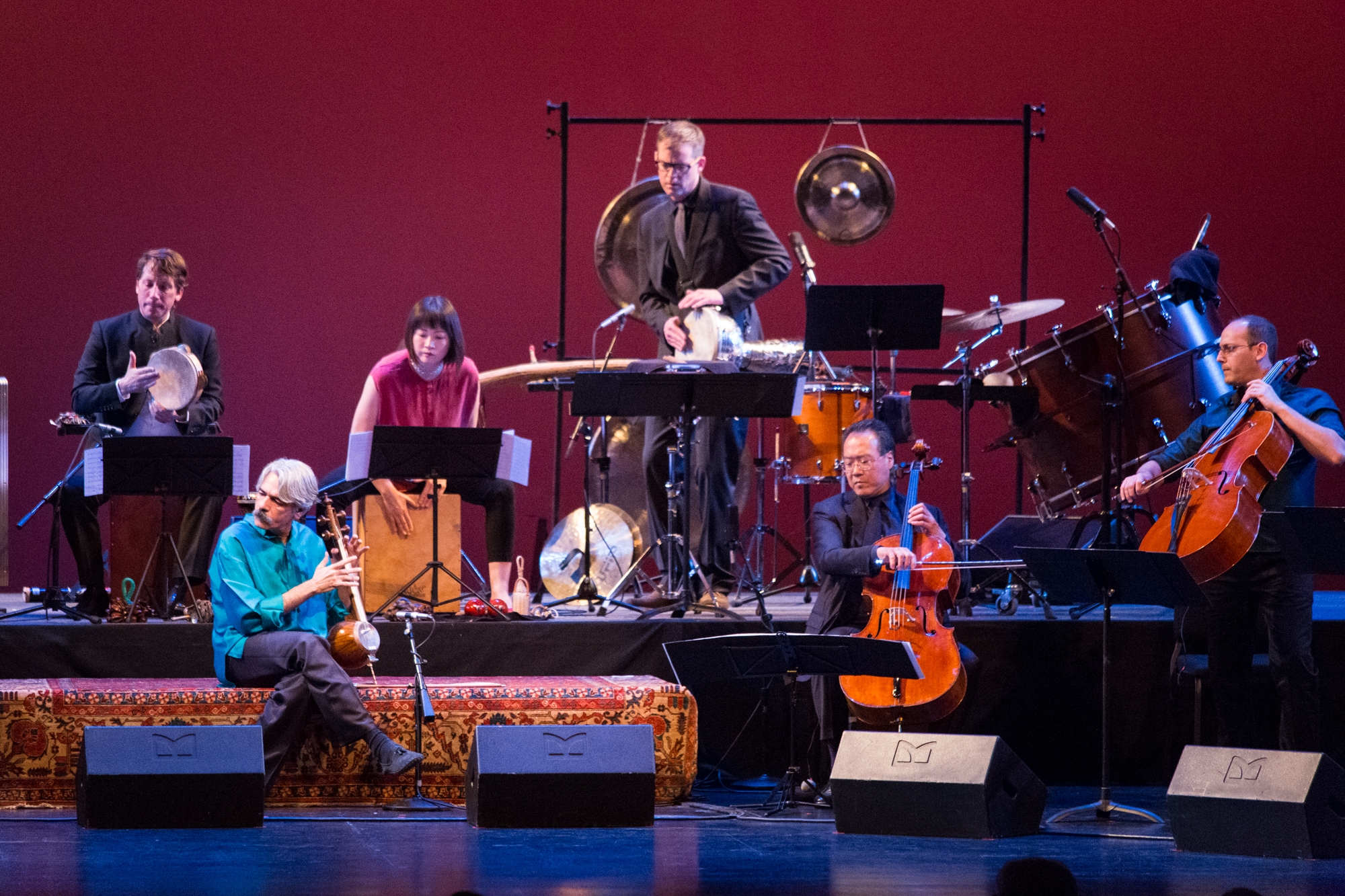 Yo-Yo Ma and the Silk Road Ensemble played to two consecutive sold out crowds in the Granada Theatre on Sunday and Monday nights.

The backdrop transitioned from blue to amber behind dozens of speakers stacked up, as if prepared for a rock show. But the music seemed to emanate directly from the instruments themselves. Kayhan Kalhor, an internationally known musician, slowly began playing the kamancheh, an Iranian stringed instrument. After four minutes of solo play, more than 20 members of the ensemble picked up their violins, clarinets and bass, adding to Kalhor’s skillful strumming.

Ma was the last person to begin playing, and while many of those in the audience likely came to see him, it was members of the ensemble who were front and center for much of the night.

Cristina Pato, bagpipes player for the Silk Road Ensemble from Galicia, Spain, said that “In Galicia, playing bagpipes is like playing soccer — you only have two choices.”

She said that in the United States, many refer to Hispanic women as simply “Latina,” rather than focusing on their accomplishments or profession.

“In Galicia, I was known as the Galician Bagpiper,” Pato said. “When I moved to the U.S., I was called Latina.”

Then she burst into a song, filling the theatre with the high-pitched screams of her bagpipe as she swayed her hips and danced around the stage. The clarinetist gyrated, swinging from side to side and looking at his fellow musicians with emphatic smiles. Many of the other musicians also danced and moved around while playing, but Ma simply focused on his cello with serious ferocity, surely knowing that the audience’s eyes were flying back to him after every measure.

This seriousness was contrasted at one point by a man who began using his own body for percussion, slapping his thighs, chest and at one point his buttocks, resulting in a scream from an elderly woman next to me.

During one brief break from the music, a violinist said that the ensemble loved coming to Santa Barbara because of the dining options.

“Musicians, they live for food,” he said. “We’ve been feasting on Lilly’s Tacos. We’re going to try and feed you back food for the soul.”

When the audience returned from intermission, only four musicians took the stage, including a clarinetist, a cellist, Kalhor and Sandeep Das, who played the tabla — an eastern percussion instrument. Das went back and forth with Kalhor, challenging him with more and more complex rhythms.

The instruments created such strong vibrations that it sounded like there were six musicians on stage even though often only three of the four were playing.

Later, the audience was rewarded as Ma took center stage with accompaniment from only Pato on the piano.

Hundreds of heads stood still as they fixated on Ma’s masterful playing, his eyes closed, his hand viciously sliding his bow back and forth on the cello.

The Silk Road Ensemble is releasing a new album, Sing Me Home, on April 22.