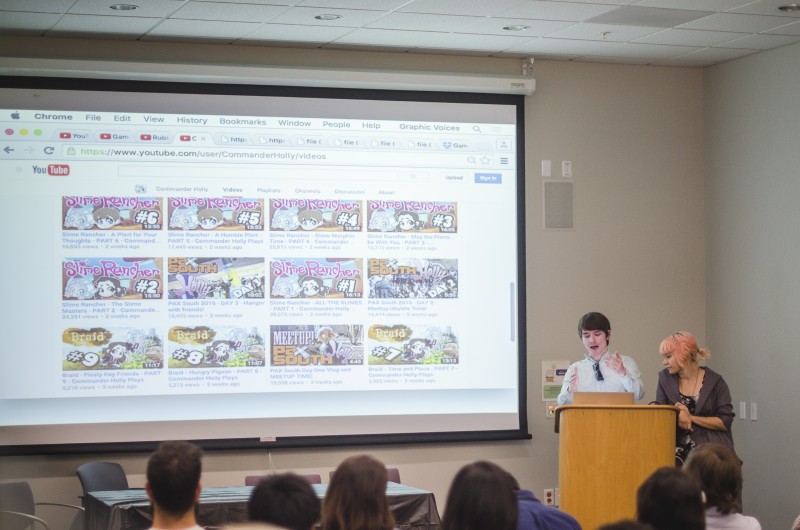 Last weekend, Feb. 20-21 the Limitless Coalition (with the generous help of the Film and Media Studies Dept.) hosted the second annual Graphic Voices conference, dedicated to linking together students from all fields to inform them on the ins and outs of the world of interactive gaming and animated media development. Bringing in a collection of speakers representing a broad variety of occupations and areas of expertise within these industries, Graphic Voices indeed provided a voice for students interested in exploring and developing their diverse passions.

Saturday’s schedule kicked off with Camille Kanengiser and Max Pittsley, the co-founders of Freeform Labs, a virtual reality (VR) startup behind ElemenTerra, a VR game inspired by the earth-bending powers of “Avatar: The Last Airbender” in which players assume the role of a spirit shaping and creating a living world with their bare hands. Kanengiser and Pittsley came to their presentation well prepared, engaging their audience with tips and insight focused on how to build a small business by taking full advantage of the human resources available to them. Since game design is one of the most interdisciplinary industries there is, they said, networking is key. Kanengiser noted that despite the fact that this sounds daunting, networking is as simple as grabbing coffee with someone, comparing game development in its combination of people’s talents to playing imaginatively as children. She and Pittsley were both incredibly enthusiastic to be working in such a groundbreaking technological and creative field as VR, an enthusiasm shared with their audience as together they considered its unprecedented applications in gaming, film and beyond. 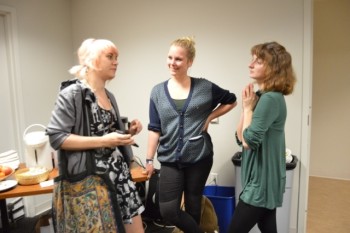 The day continued with a slate of animators, all presenting unique corners of view on their craft. Phil Weinstein is a storyboard artist and animation director who’s worked on series like “Darkwing Duck” and “Jackie Chan Adventures” as well as movies like “Balto” and “The Lion King 2.” He explained the process of directing for animation as opposed to live action, detailing all the moving parts that go into creating an episode of animated television and how the director takes on the massive task of overseeing every step to ensure that the product is cohesive. Mark Kirkland also shared his insight on animation direction; he’s directed over 70 episodes of “The Simpsons,” more than anyone else in the show’s 27 years. A graduate of the ever-prolific CalArts, Kirkland expounded on a bit of animation history before discussing earnestly with the audience his experience working with such beloved characters for so long. He shared vintage “Simpsons” art and information on the importance of time away from work, detailing the live-action film hobbies that relax him in his time away from Springfield. 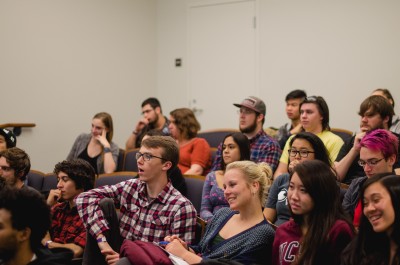 Eric Homan, the Vice President of Development at Frederator (the independent animation studio behind hits like “The Fairly OddParents,” “Adventure Time” and “Bee and PuppyCat”), spoke with the event-goers and the Nexus on what it’s like to incubate some of the most prolific animated series in the world. On the staying power of “OddParents” compared to other early Frederator shows on Nickelodeon (“My Life as a Teenage Robot,” “ChalkZone”), Homan suggests that “it all comes down to character,” citing creator Butch Harman’s passion to succeed and his creation of relatable, enjoyable characters as the root of the series’ ongoing 10-season run. Regarding the studio’s thoroughly contemporary distribution relationship with YouTube, Homan highlighted some of the drawbacks that come with its advantages.

“We tend to produce a lot less and spend a lot more money,” he said, as in the online model they “don’t have the resources of say, ‘Adventure Time.’”

These challenges are behind the lengthy release schedules of the popular online content on their Cartoon Hangover channel, like “PuppyCat” and “Bravest Warriors,” the latter of which Homan premiered a new episode of to a hearty response. Homan is excited about Frederator’s upcoming lineup of content, including adaptations of games like Double Fine’s “Costume Quest” and Konami’s “Castlevania.” In addition to these projects, Sony Pictures Animation is funding a development round of new shorts for Frederator, the next round in a long history of production that gave birth to all the aforementioned hits in addition to favorites like “Dexter’s Laboratory” and “The Powerpuff Girls.”

After spending the day soaking in captivating information, munching on snacks and spending breaks wrecking each other in Smash Bros, the Graphic Voices gang split up, ardently anticipating the next day’s guests.

Sunday’s first speaker, Ryan Graff, is a UCSB alum and the localization lead at XSEED Games. Discussing the notion of censorship of Japanese content for western audiences, Graff attested, “We want to get the game as close to the Japanese in terms of content — that some would find objectionable content — as we can.” He noted that it is often impossible, or at least not sensible, to maintain direct translations all of the time, as some Japanese phrasing doesn’t “sound like something a natural English speaker would say; it’s not what’s being said but how it’s being said.”

Character designer Stephen Silver, known for his distinct angular work on shows like “Kim Possible” and “Danny Phantom,” went on a fiery riff on having what it takes to keep your nose to the grindstone and develop the talent and personable skills necessary to make it in media industries. He showcased the stages of his caricature work to highlight the immense effort it takes to become a professional, channeling the spirit of a motivational speaker.

Nexus Shift Studios intrigued attendees with “Archive,” their renovation of the tabletop RPG for today’s connected world. Bemoaning the monopoly of “Dungeons & Dragons” and the steep learning curve required to get new players involved in the imaginative world of tabletop gaming, the Nexus Shift team showed off how their game pairs with an app in order to make the process more intuitive and less math-intensive. They shared dark and creative art of their subversive fantasy world, previewing a polished experience that seems impressively inviting for players new to the genre. 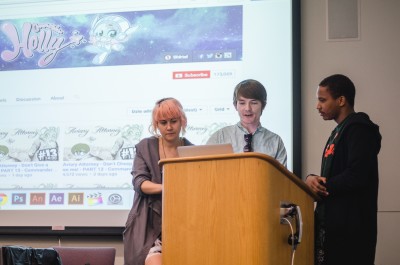 Wrapping up the event, husband and wife duo Ross O’Donovan and Holly Conrad (aka RubberNinja and Commander Holly) were undoubtedly the superstars of Graphic Voices. Known for their hugely popular YouTube channels (hugely popular might still be an understatement; Ross is a member of Game Grumps, a Let’s Play channel with over 3 million subscribers), the two shed light on their relatively young industry. They revealed the importance of constantly putting out content and of self-branding, reminding people that you’re funny enough to earn their subscription. They mentioned the riskiness of the business, expressing that YouTube’s algorithm could change overnight, and the paradigm of making money from your viewers with it. When an ad popped up before they screened one of their videos, Ross exclaimed emphatically “This is making me money! You want those potato chips, don’t you?” The audience, hanging to his every word, erupted in laughter. Conrad and O’Donovan even invited up Andre Taylor, a student and aspiring YouTuber, to give him some pointers on his budding channel. 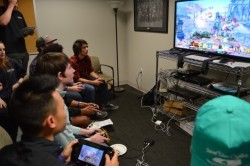 As the weekend winded down in an upstairs meeting room of the SSMS building, the Nexus Shift team, Conrad and O’Donovan rubbed elbows with the assembled students, snacking, Smashing and just chatting geekspeak. After an intense eight-player round, Ross’s Kirby launched my own sleepy-eyed Villager over Temple’s ceiling, and I left the event in an afterglow of new insight and unabashed nerdiness.

The Limitless Coalition’s tireless efforts were graciously met by the attendees, all glad to participate in such a thoughtful and entertaining event. Though the Film and Media Studies Dept. doesn’t have programs designed specifically around animation and games, Graphic Voices proves that the passion is there and that the only place that the study and development of these forms has to go is up.