After faltering in the lasting seconds of last Saturday’s loss to Long Beach State, the UCSB women’s basketball team hopes to avenge itself in its last home game of the season before ending beginning its road trip to end out the season. 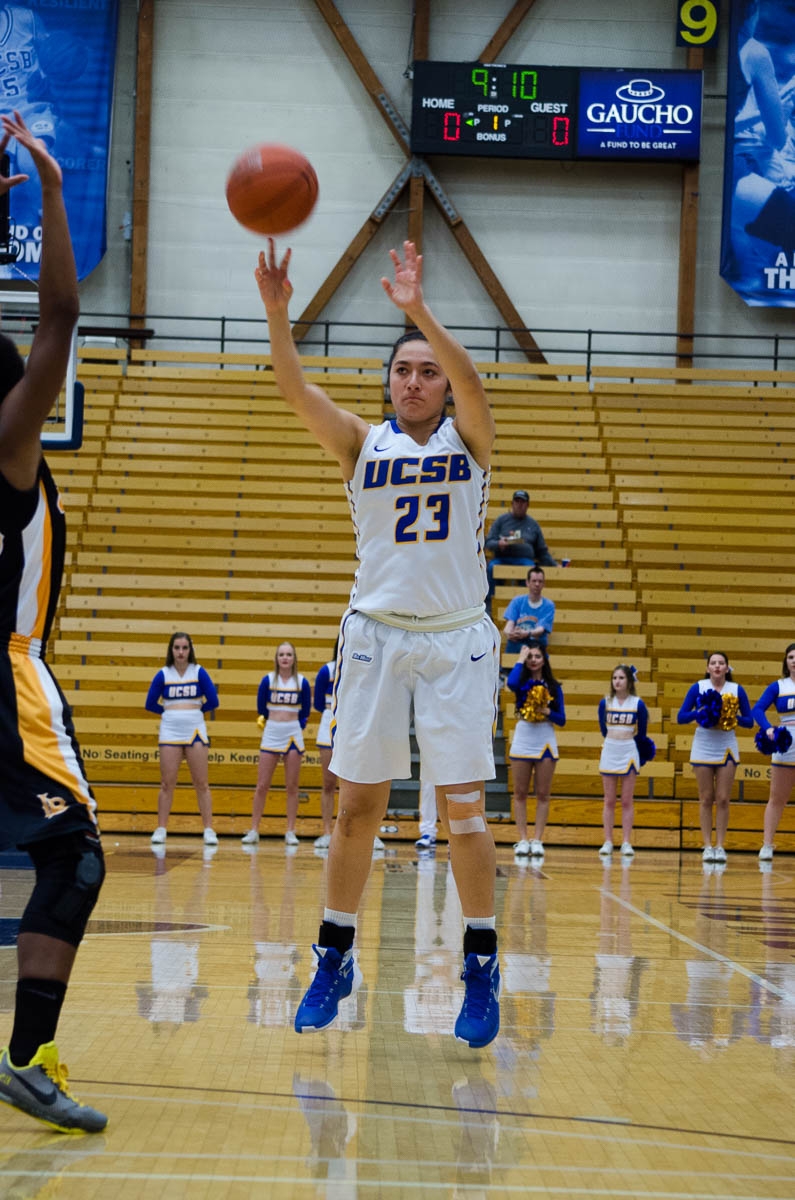 UCSB has not faced the Mustangs since defeating them 78-67 in the Gauchos’ conference opener. After earning a victory against Cal Poly on home territory, Head Coach Carlene Mitchell is looking forward to her second meeting against the Mustangs.

“It’s awesome, [the game versus Cal Poly] was the best crowd we’ve had all year,” she said. “They’ll [Cal Poly] be licking their chops to get us up there. We’ve got to be as good as we’ve been all year. Be more discipline, [against CSULB] we gave up middle drives, didn’t communicate switches, and turned the ball over too many times.”

UCSB enters tonight game with an overall record of 10-17, 7-6 in the Big West. The Gauchos sit at fifth in the conference standings, narrowly trailing UCD, who is currently in fourth at 8-5. UC Irvine is clinging onto its eighth-place position with its 8-22 and 1-11 conference record. It owns just one less loss than CSUF, who is 1-12 in the Big West. Cal Poly is 13-14 overall and 6-8 in Big West play for sixth-place, attempting to bounce back from its 61-56 loss to Long Beach State last night.

In store for the Gauchos are two opponents with similar playing styles that revolve around their frontcourts. This week’s games will be UCSB’s second meeting against both teams. Santa Barbara will hope to establish a better defensive effort after allowing field goal percentages above 40 percent against both opponents earlier this season.

Once again, UCSB will attempt to contain the interior presence of UCI’s duo of junior forwards Mokun Fajemisin and Shereen Sutherland.

Fajemisin’s rebounding and blocking abilities are most challenging when facing the Anteaters. In addition to ranking fifth in the Big West in rebounds per game at 7.6, her average of 2.2 blocks per game leads the conference. Fajemisin will come into tonight’s matchup with a streak of at least two blocks in the past four consecutive games.

While Sutherland’s averages of 21. 8 minutes and 7.8 points per game aren’t astounding, her versatile skillset of post offense and mid-range shooting can be difficult to defend.

“[Fajemisin] really bothered us,” Head Coach Bonnie Henrickson. “Sutherland is a really talented kid who just didn’t have much rhythm there. She got some step away [opportunities] and pulled Je Zhe away from the basket. We fouled too much. It will be important for us to pressure defensively, force tough twos, and rebound.”

UCSB ended its first matchup against UCI with 24 personal fouls, sending the Anteaters to the free-throw line where they went 16-23.

In just 24 minutes played, Fajemisin led the Anteaters with 16 points on 6-13 shooting from the floor while adding six rebounds, two steals and three blocks. Sutherland will look to improve her three foul performance in which she had one point at the free-throw line in 14 minutes of play.

Despite allowing a 40. 4 opponent field goal percentage against the Anteaters in the first meeting, UCSB recorded its third-best shooting performance of the season at 54.4 percent.

Certainly, the Gauchos will look to confine the Anteaters’ offense tonight, which has struggled on the road averaging just 54.1 ppg and a 32.5 field goal percentage.

In spite of falling short in the team’s Senior Day celebration last weekend, UCSB will hope to send out its senior group— Jasmine Ware, Dioseline Lopez, and Kendra Morrison— with one last victory over its Blue-Green rival.

The Gauchos’ pursuit of sweeping the season series against the Mustangs will be intense as they prepare to face one of the best defenses in the Big West.

While the Mustangs’ defense has helped to stifle opponents, their offense has yet to truly discover a consistent source of scoring. However, emerging in the team’s last three game has been senior guard Beth Balbierz. She has averaged 21.0 ppg over the Mustangs’ last three contests and is second on the team in scoring with 12.9 ppg.

At the forefront of Cal Poly’s offense is junior forward Hannah Gilbert in the paint. She leads the Mustangs with 13.0 ppg, is third in the Big West in rebounds per game with an 8.7 average, and is second in field goal percentage at 53.3 percent.

Tonight’s tip-off will take place at 7 p.m. in the Thunderdome. The Gauchos will face Cal Poly this Saturday, Feb. 26 at 2 p.m. in the Robert A. Mott Athletics Center.