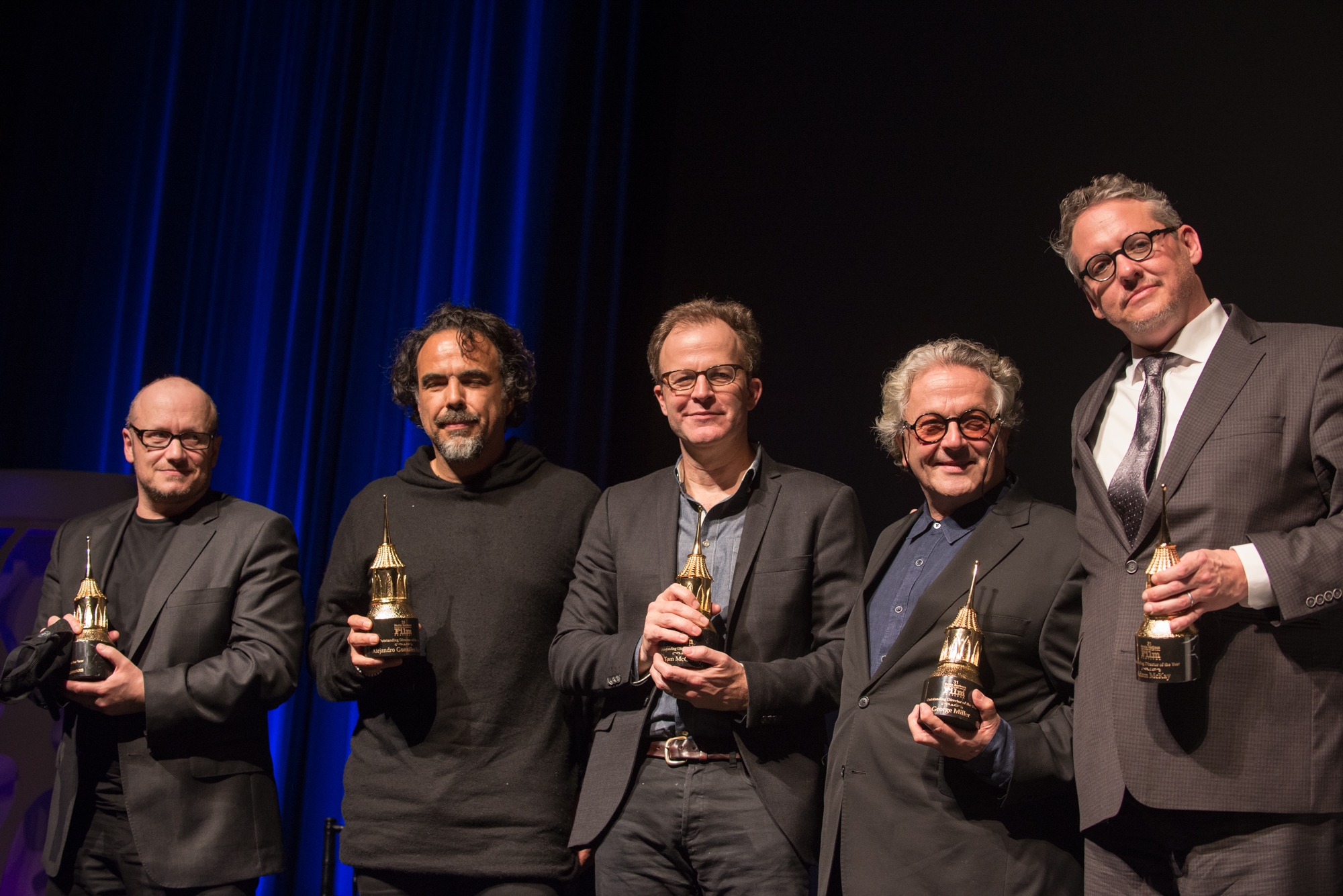 Abrahamson, a native of Ireland, was awarded for “Room,” a film about a woman and her son trapped in a garden shed. This reporter was able to talk to him before he went inside.

AW: What was it like for you when you had to move outside the shed and into Toronto?

LA: It was strange because I think we all expected that we’d all be looking forward to it. We’d been in the room for about a month. And we thought, “Great, it’ll be wonderful. We’ll have some space to work in and everything.” But actually it was challenging because I think we got really used to that environment in the studio, you know? And our lives were pretty regular, you know? When you’re shooting in the studio, you can arrive at a certain time and you can work the same hours every day. And then we [went] back out into the crazy world of the outside world. And I think we also sort of missed Room a little bit. And it was also cold. It was Canadian winter. So yeah, it was tricky.

AW: Considering that Jack’s point of view melds with Ma’s unlike the book, did you find it difficult to imbue the movie with a sense of wonder and imagination?

LA: I think that point of view was the biggest challenge in the whole movie. Inside Room, we sort of moved between being with him and being with her, and when we’re with him, I think the audience starts to feel more of that childlike tone, and when you’re with her, you feel the darker aspect of the place. So it’s challenging because you’re looking at what it’s really like, and that’s really intense. So to keep the magic can be hard, but I think we managed to do it.

LA: We’re still working on the script, so that’s a little bit down the line. There are a couple other projects that’ll probably happen beforehand. But it’s great. It’s a great film. Great story. 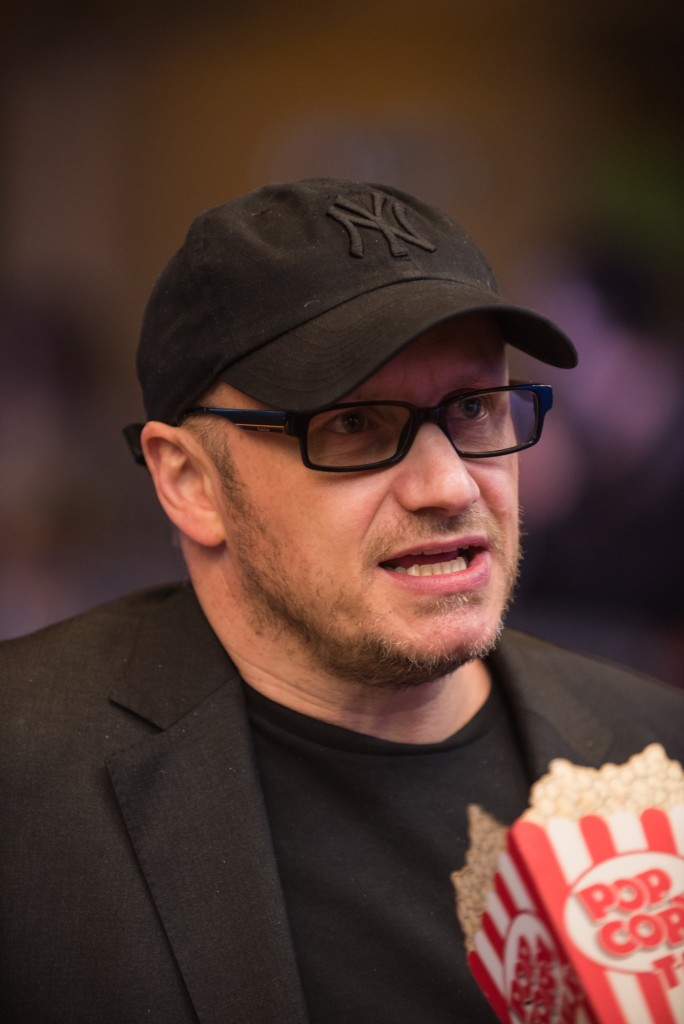 Abrahamson discussed his awarded film with moderator Scott Feinberg, who hosted the same event last year. The director wrote a five page letter to the author of the novel, Emma Donoghue, upon which the film was based in an attempt to convince her that he was the right director.

She did not agree right away, but became more convinced that he was the right choice after she saw his films. Donoghue would go on to pen the film’s script and be nominated for an Oscar herself.

Abrahamson explained that he cast Brie Larson in the leading role because he felt she could easily bond with a child. Jacob Tremblay was cast only four months before principal photography began. Since he was still a young child, the crew didn’t want him to noticeably age as shooting went on.

The director discussed how the titular room was built in Pinewood, the same studio in which “The Force Awakens” was shot. The set was small and cramped, making it difficult to shoot, but it was also intimate. “I was in the bath sometimes and popped up to give instructions at the end of scenes,” Abrahamson said.

After him came Alejandro G. Iñárritu, director of “The Revenant” and last year’s Oscar winner for Best Director for “Birdman.” Cheers from the crowd standing outside the barriers heralded his arrival. On the red carpet, reporters swarmed the informally dressed Iñárritu as he walked into the Arlington.

He explained what drew him to the story: “I saw some elements I really was attracted to, and one of them was the fact that there was a linear story in a very clear, simple way in what these men went through in this huge landscape and solitude. The simplicity of it in a way gave some opportunities [to] other things. I was curious about it. Because it was something I’ve never done before, it was terrifying.”

Like in “Birdman” (which he described as a portrait of a suicide), Iñárritu worked with Emmanuel Luzbecki, who was also the cinematographer for “Gravity.” Iñárritu described him as “a chronic dissatisfied person” and was only as good as he was because “he has sausages and chicken for breakfast, or Mexican Coca-Cola,” which drew laughs from the audience.

Tom McCarthy was up next. Feinberg asked him if his Catholic background made it difficult for him to take on “Spotlight.”

“No, it wasn’t. The information was so compelling,” McCarthy said.

Besides being a director and writer, McCarthy also has some acting experience. He portrayed the ethically challenged reporter Scott Templeton on “The Wire,” and said the experience made him interested in journalism.

In order to accurately recount the story of “Spotlight,” McCarthy and his co-writer Josh Singer met with multiple individuals involved with the case, both journalists and victims. One of them, abuse survivor Phil Saviano, was in the audience and received applause when McCarthy asked him to stand. Saviano filmed the rest of McCarthy’s talk with Feinberg on his phone. 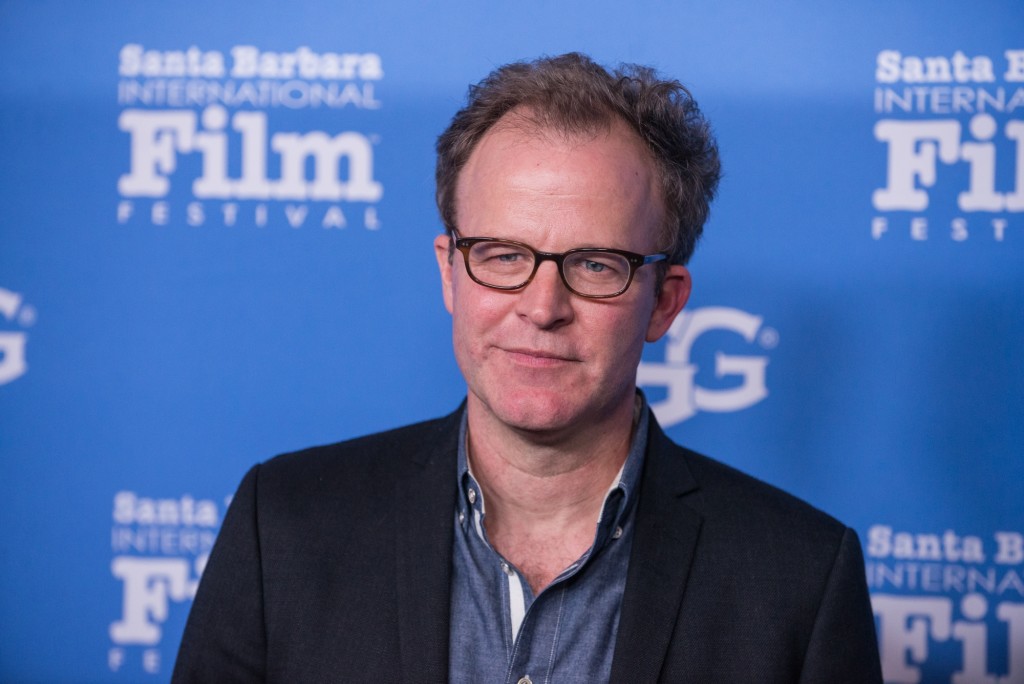 McCarthy mentioned that soon, the Vatican will be screening “Spotlight” for a commission of 16 cardinals.

“The Big Short” director, the towering Adam McKay, followed after McCarthy. McKay is primarily a writer of comedies and noted he was aware of how surprising it was that he went from writing “Step Brothers” to making a movie about one of the biggest stories of the past half-century.

The film came about when McKay’s agent, Phil Roberts, asked him if he could direct anything, what would it be? McCarthy replied that he wanted to adapt The Big Short.

Before he knew it, Brad Pitt’s production company, Plan B Entertainment, was asking him to direct (and Brad Pitt was asking to be in it). However, Adam Goodman, the head of Paramount, laughed in McKay’s face when he listed all the actors he wanted to cast.

Despite this, McKay was able to bring in nearly everyone he wanted. For the scenes where the characters break the fourth wall, he cast Margot Robbie, Anthony Bourdain, Selena Gomez and Richard Thaler. He described Gomez as sharp and Thaler, an economist, as a “diva.”

As for how the film was received publicly, McKay expressed joy at seeing people on Twitter saying that they didn’t know how to feel about his film. To him, that was a sign that he had made a thoughtful work. “The Big Short” was screened for Congress and was admired by progressives and conservatives alike.

Finally came George Miller, director of “Fury Road” as well as the preceding three “Mad Max” movies. He had time for a single question. 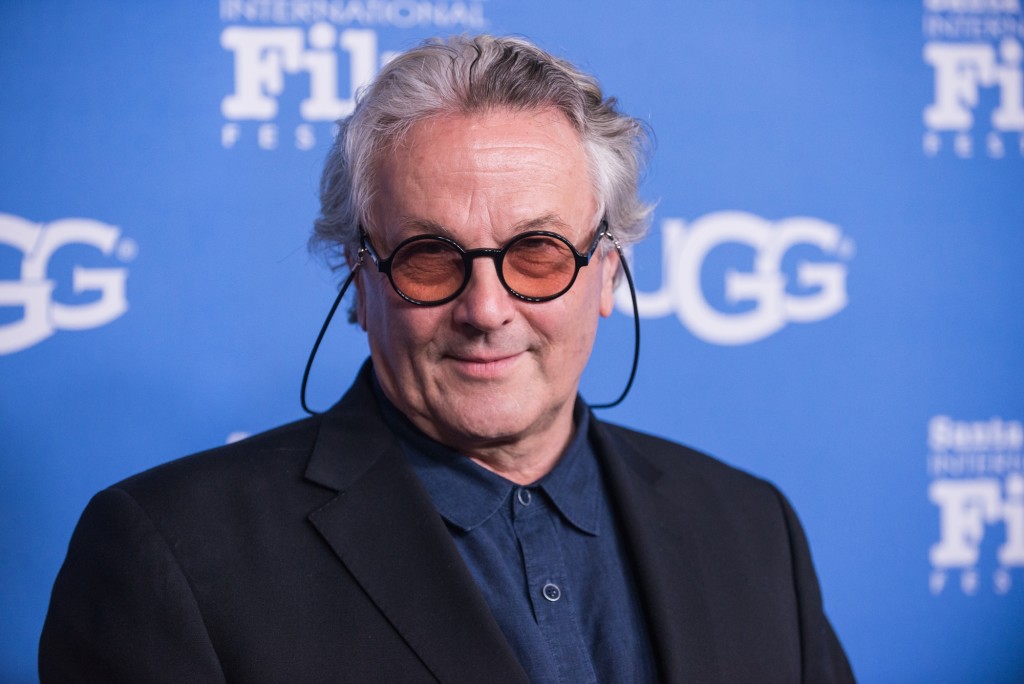 AW: What were the challenges of melding practical and special effects on such a giant scale?

Inside the Arlington, Miller didn’t discuss the film itself as much as he did his family and the nature of his franchise’s stories. “My mother recently asked me, ‘I thought after the ‘Happy Feet’ movies you were settling down. Now I’m not so sure.’”

“When you have kids, all you do is watch family movies,” Miller said. “Everyone loves those stories. And now that [my kids] are grown up, I can make more Mad Maxes.”

The original “Mad Max” was shot in Australia on a small budget and released in 1979. It introduced the character of Max Rockatansky, played by Mel Gibson. The character has remained a staple of pop-culture since. “I wasn’t aware of it at the time, but somehow we tapped into a pre-classic archetype,” Miller said. He compared the “Mad Max” movies to American westerns.

“What’s so seductive about ‘Mad Max’ stories is that they’re allegorical,” he said. “We can’t exist without stories. It’s how we make the world coherent.”

Towards the end of his talk, Miller mentioned what has been one of the most surprising reactions towards “Fury Road” for him: “Someone came up to me and told me ‘I’ve just had a baby girl, and I called her Furiosa.’ And I thought, ‘Holy cow.’”

To cap off the event, all five directors were brought out at once to talk to each other and continue answering questions from Feinberg.

When asked how they met each other, McKay revealed, much to the assembled audience’s amusement, that Tom McCarthy was once his employee at RadioShack. During an altercation, McKay told his employee, “Goddammit Tom, this is RadioShack!”

“Are you for real?” McCarthy replied. He promptly quit.

As he left, McKay turned to his co-workers and said, “That’s a loser.” He continued to rib the good-natured McCarthy, joking that he didn’t care for “Spotlight.”

Abrahamson saw the film at Telluride. “There’s a level of understatement and naturalism. I sat back and thought, that’s the best thing of ‘70s American moviemaking.” 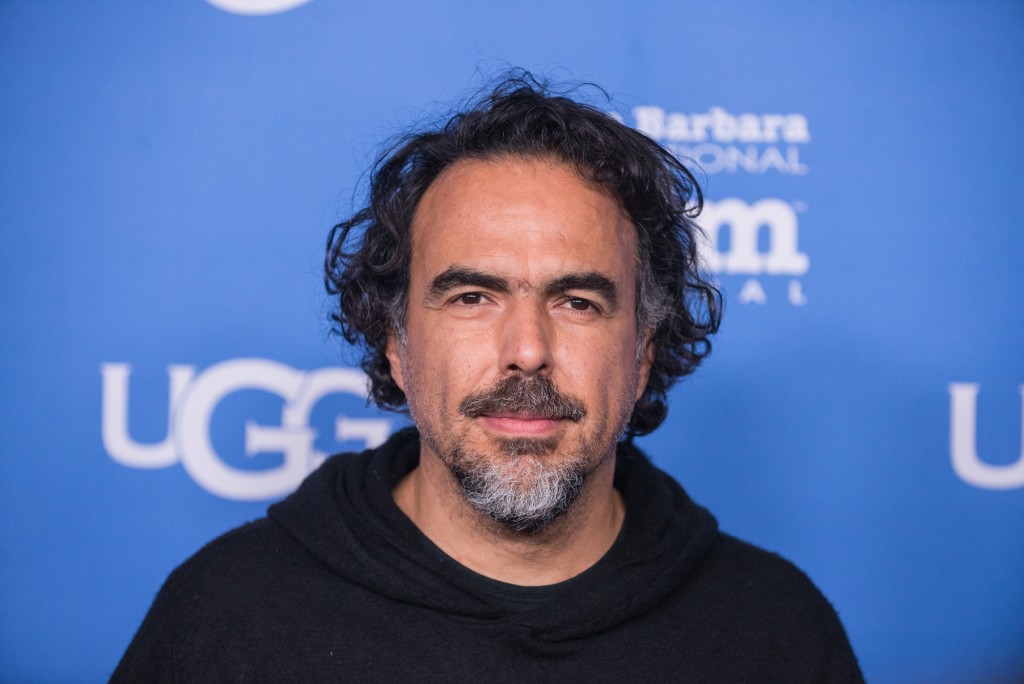 Iñárritu complimented each director’s films. “I couldn’t believe how Lenny shot such a film in that space. All that atmosphere suddenly turns. The minimalism covers so many things that are so profound. George, when I saw ‘Mad Max’ I was exhausted. Every two seconds he cuts to another shot more powerful than another one. I was so upset with Adam when I finished [The Big Short]. I was so unsettled. Formally, I was very surprised, very shaken, very provoked. I am honored to be with these gentlemen.” Iñárritu also said the principle and victim actors from Tom’s movie were outstanding.

The event ended when Andy Davis, director of “The Fugitive,” gave each director their “Outstanding Director of the Year” trophies.