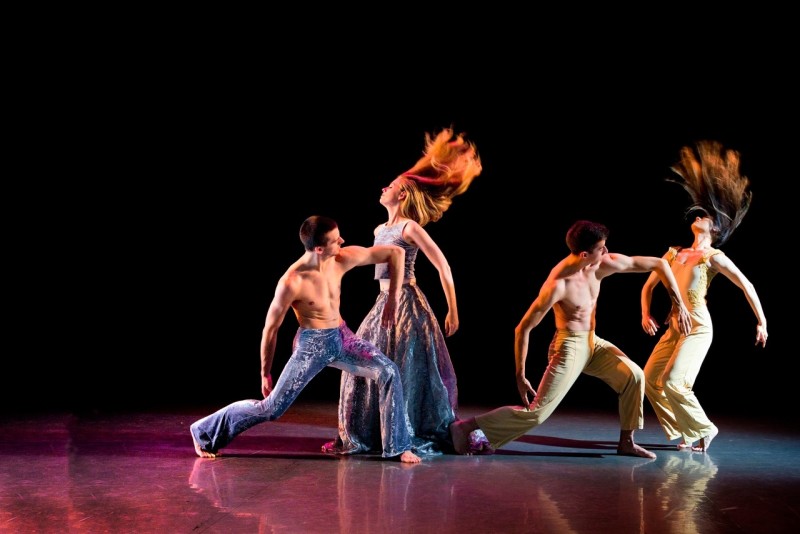 SBDT was started in 1976 as what director Christopher Pilafian described as “a laboratory for creative research in the university.” The company has had three directors over the years, all of whom served as choreographers for the anniversary show: Jerry Pearson, Alice Condodina and Pilafian himself.

The performance opened with Pearson’s “Amuse-Bouche,” which filled the Hatlen with a Wonka-like feeling as the dancers twirled and ran about in brightly accented white costumes. Gigantic close-ups of fruit were projected onto the background screen, along with the occasional series of dialogue bubbles that informed the audience of important information, such as: “We’re dancing for you!” and a “Menu of the Evening” which listed all four dances to be performed that night. Some of the audience members were taken aback that the dancers seemed to occasionally serve as background movement to the projections, whispering and laughing to themselves as the dance progressed. However, familiar faces populate the audiences of UCSB’s performances over the years, and many were not viewing Pearson’s style of choreography for the first time. There was no hesitation at the conclusion of the piece: The audience burst into cheers and enthusiastic applause, evidently quite amused by “Amuse-Bouche!”

The remaining pieces of the evening were slightly less avant-garde, and Pilafian chose to insert his director’s speech between “Amuse-Bouche” and these more classically choreographed pieces. After introducing the company and the four pieces of the evening, Pilafian posed an observation concerning dance: “Authors, painters, composers, sculptors and architects are remembered chiefly because there is tangible evidence of their work. Choreographers, not so much. As Merce Cunningham said, ‘dance is the impermanent art, as impermanent as breathing.’” With that, Pilafian invited the audience to take a deep breath with him before continuing on with the evening’s repertoire.

Condodina was SBDT’s first artistic director and presented to the audience her work, “Fragrance of Memories.” This piece featured Christina Sanchez dancing as the lone female amongst four of her male companions. Surrounded by white silks and men in white costumes, she sprung forth from the wings as a purple sylph. Through the entire dance, she maintained a loose focus upon her surroundings and the audience, making her movement quality and facial expressions dream-like and hypnotic. The dancers’ sailing movements were emphasized in the lull of Chopin’s music, “Larghetto from Piano Concerto No. 2 in F Minor,” and prepared the audience for the Vivaldi that was to come next.

“Impenetrable Winter” was one of four movements choreographed by Edgar Zendejas last year for the performance “Common Ground,” which brought together Eisenhower Dance, State Street Ballet and SBDT. Given the four seasons Vivaldi composed and just three companies, each company was given their own season before joining all together for the fourth. Though many members of the audience had seen the dance before, the piece was just as sensational as it had been the day it premiered. For first-year physics major Ryan Collanton, who has been taking dance classes as zealously as any full-time dance major, this performance was an unparalleled inspiration. Upon being asked how the dance made him feel about his own determination to continue dancing, Collanton responded with “satisfied” before expanding upon the word: “[Dance is] an incredible art, one that you can take in many different places; you don’t always realize where you can take it until you see people who have been training their entire lives do it. It’s satisfying.”

Pilafian’s choreography was the final piece of the night. Titled “Strange Attractor,” he, like Pearson, made use of the projector screen. Pilafian’s projections, compiled by Michael Klaers, were less intrusive in nature upon the audience’s experience of the dance. On the projections in the back, Pilafian explained that they were images of strange attractors: “They were all graphics of the strange attractor principle — as best you can do in a two-dimensional image. The pathways, the kinds of trajectories and therefore the kinds of spatial configurations and relationships that unfold in the dynamics of the strange attractor in the world. They’ve been artfully worked with by our production designer Michael Klaers to bring out all kinds of colour and balance … all integrating into the subject landscape of the piece, which is referential to this world, this idea that things can be separate and connected at the same time.”

The piece was the longest of the evening, and featured many pieces involving all seven dancers, and a few duets spaced out within. Many of the duets were artfully choreographed in such a way that the dancers’ bodies melded into one, flowing into and through each other, as connected by the empty space between their bodies as they were by places of contact.

Santa Barbara Dance Theater showed the incredible diversity of the modern dance company, and its beautiful execution of all choreography made evident how it has lasted a full 40 years, and will hopefully continue to last many more.