The Daily Nexus
Fine Arts
Juan Felipe Herrera: Much More Than a Poet Laureate
February 19, 2016 at 3:44 pm by Jason Chun 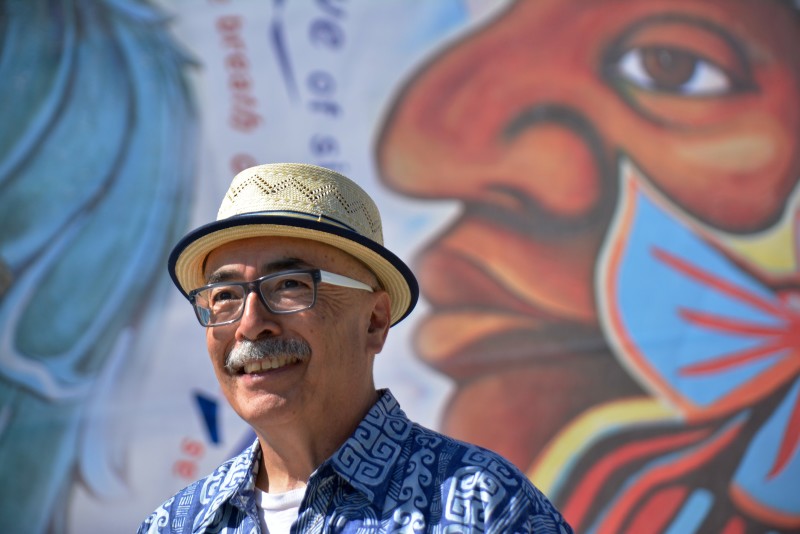 Those who settled in at Campbell Hall on Feb. 1 expecting a simple evening of poetry witnessed Juan Felipe Herrera deliver a one-man variety show that mixed comedy and storytelling with elements of his Mexican heritage. It certainly wasn’t an everyday poetry reading — but then, it certainly wasn’t every day that the 2015-2016 United States Poet Laureate came to UCSB.

For the occasion, Herrera had donned a simple striped button-up and a blue trilby. The national poet strode onto the stage with a warm smile, his rhapsodies of gratitude drowned out by applause from some 300 attendees. He paused to the side of the podium rather than standing in front of it. Throughout the evening, he moved with deliberate strides from one side of the stage to the other, holding one of his books in one hand, while gesticulating with the other. His voice, calm but passionate, gave him the air of a favorite uncle.

Before launching into his poems, Herrera relayed the story of his visit to UCSB in the early 1970s: He had been offered $150 (today around $1,000) to take a friend’s place at a poetry reading. “Don’t worry about it!” he had said to the skeptical English professor who questioned his friend’s absence and his proposal to sing and dance. Herrera segued back into the present by performing the piece that he performed 40 years ago, complete with a brief song and dance number.

The poet next spoke fondly of the talk he delivered to students at Dos Pueblos High School earlier that day. After that talk, one teenage boy expressed his gratitude and — to Herrera’s great surprise — asked for a hug. Before he knew it, others were lining up with the same request. It was a scene that might have come straight from one of his poems.

Herrera’s poems merged the absurd with the ordinary, the beautiful with the hilarious. Each piece was less of a reading than a skit, brimming with motion and emotion. His longest poem imagined the inside of a soap factory, where a pair of workers discuss the necessity of oversized bars of soap, the bourgeoisie and lunch breaks. While reading his verses, Herrera pantomimed the workers and their supervisor, much to the audience’s delight.

Third-year English major Aleksander Sobevski recalled watching a video of Herrera performing in the 1970s, and remarked on the how the poet’s enthusiasm remained unchanged across decades.

Herrera’s prefaces to his poems were just as memorable as the poems themselves.

“Be careful, there will be lizards flying out of this poem!” he cautioned, before launching into a reading first in Spanish, then in English. As an introduction to “You & I Belong in This Kitchen,” he joked, “I used to play with ants — they were my Legos.”

Before beginning “It Can Begin With Clouds,” Herrera reminisced on his days as a student at UCLA where he “majored in cloud watching.”

First-year student Rosa Aum said regarding Herrera’s fascination of clouds, “I feel like the clouds are some of the most magnificent sources of my own inspiration, so I really, really loved that.”

Local Santa Barbara writer Enid Osborn said after Herrera’s performance, “I adored him. It was just fabulous to hear poems spoken in Spanish so beautifully, with such music. Few poets … give themselves to the audience the way he did.”

While it is impossible to separate the poet from his poetry, Herrera strove to make the evening about everyone but himself. He took a moment to honor and read a poem dedicated to José Montoya, a fellow Chicano poet who died in 2013. He praised the writers and artists in the audience, as well as the family members who “have walked a long way” to support each member of the audience. “We’re all gathered here … for them,” said Herrera.
To simply call Herrera a poet feels inadequate for encompassing the talent he displayed at Campbell Hall. His diverse performance brilliantly conveyed to the audience, regardless of their ethnic background or artistic capabilities, that his art was about them. In that sense, the Poet Laureate succeeded in speaking as the everyday American: funny, friendly and humble.