The Daily Nexus
Sports
UCSB Remains on the Road, Will Participate in Mary Nutter Collegiate Classic
February 18, 2016 at 5:02 am by Antonia Bird 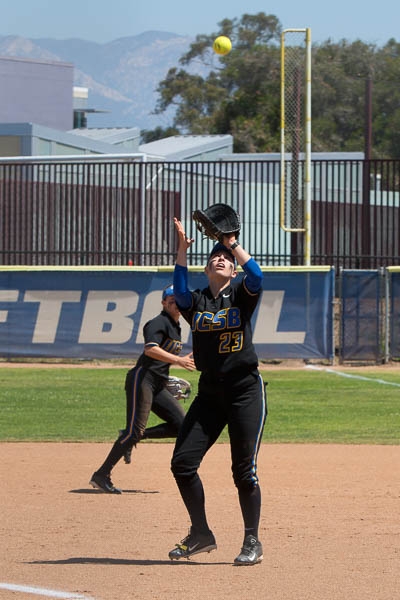 The UCSB softball team will head to Cathedral City this weekend to play in a tournament stocked with powerhouse teams. The Mary Nutter Collegiate Classic will be the Gauchos’ second preseason tournament this year. Santa Barbara is set to open the tournament Friday afternoon against the Binghamton Bearcats.

After a 2-3 opening record to begin the season, the Gauchos are aware of the necessary adjustments as they prepare for another slate of games.

One of their strengths will be freshman first baseman Sierra Altmeyer, who was named the Big West Player of the Week after leading the Gauchos with a .647 batting average at last week’s Arizona Hillenbrand Invitational. Altmeyer leads the team with 11 hits, nine RBIs, two home runs and three doubles.

Senior infielder Arianna Palomares has also been a strong contributor for the Gauchos team, already having scored seven runs and tallied six RBI’s in the young season, while teammate junior outfielder Kristen Clark has scored seven runs.  In addition, freshman pitcher Veronika Gulvin carries an ERA of 5.36 with 13 strikeouts in 15 innings.

Friday will serve as the Bearcats’ season opener. Binghamton will attempt to improve its overall finish of 24-21 in the 2015 season. Expectations have heightened for the Bearcats after being dubbed the first place favorite in the American East Conference preseason poll.

Binghamton returns this year with a trio of First-Team All-Conference players. Senior infielder Lisa Cadogan is the Bearcats’ primary catalyst in a majority of games as she led the team in virtually all offensive categories last season.

In 2015, she was 19th in the nation with 0.36 doubles per game, 25th in RBI’s per game with 1.18 and boasted a batting average of .429, which ranked second in the America East Conference. Certainly, the Gauchos will hope to contain her power and accuracy at the plate.

Santa Barbara will also face the No. 11 Washington Huskies on Friday. The Huskies went 4-0 in their opening weekend and are hoping to build off the momentum of their incredible overall record of 42-17 last year.

A key component to Washington’s success was sophomore infielder/outfielder Taylor Van Zee. She finished her freshman season batting .357, and was named to the PAC 12 All-Freshman team.

The Gauchos’ difficult stretch of games continues with two more nationally ranked opponents on Saturday. Starting at 9:30 a.m., the Gauchos will take on No. 25 Texas A&M and No. 4 LSU.

Currently 4-1, Texas A&M finished with a solid overall record of 40-20 last season. Returning to its batting lineup are several players who hit over .300 last year. Sophomore infielder Tori Vidales holds the team’s second highest batting average at a .417 clip and is fresh off a team-high 51 runs scored in 2015.

Although Texas A&M possesses a respectable offense, its pitching rotation has weakened with the loss of senior pitcher Rachel Fox, who totaled a team-high 182 strikeouts and a 23-14 record in her final season. The Gauchos will look to capitalize against the Aggies’ youth in pitching, which only has one senior in the position.

LSU comes into the tournament with a record of 4-1. After suffering its only loss against Pacific, LSU exploded for a 10-1 victory over Pacific in a rematch the next day. Guiding the Tigers’ redemptive win were two of their best hitters in junior outfielder Bailey Landry and senior infielder Bianka Bell.

Bell helped to bring in four runs while Landry recorded two hits and an RBI in the win. Both currently own batting averages above .400, providing the Gauchos’ pitching rotation with

UCSB will finish its tournament playing host team Bethune-Cookman on Sunday.  With a respectable 3-2 record after its opening weekend, Bethune-Cookman received honors for two of its prized rookie players.

Freshman pitcher Deidra Genera was named the league’s pitcher of the week, while freshman infielder Brianna Sanders picked up rookie of the week. With young players having such an immediate impact, Bethune-Cookman is a team the Gauchos cannot overlook.

Santa Barbara has a challenging series of games in this weekend’s Mary Nutter Collegiate Classic. However, Head Coach Brie Galicinao knows exactly what her team needs to do to successfully approach them.

With the Gauchos taking on such strong lineups this weekend, the pitching staff will be feeling the heat, but the Gauchos’ defense will come ready to play.

“With disciplined power hitters, we just have to be smart about our pitching call strategy and knowing how to best challenge hitters,” Galicinao explained.

After facing just one ranked opponent last weekend in No. 9 Arizona, UCSB will face its most difficult set of games as it will face three nationally ranked teams this weekend: No. 4 LSU, No. 11 Washington and No. 25 Texas A&M.

Game action will start against the Binghamton Bearcats this Friday, Feb. 19 at 12:30 p.m. The Gauchos will face Washington later that day at 3 p.m. Its Saturday doubleheader on Feb. 20 will begin at 9:30 a.m. against Texas A&M and LSU at 3 p.m. Ending UCSB’s weekend will be its game against Bethune-Cookman at 2 p.m. on Sunday, Feb. 21.