The Daily Nexus
Sports
UCSB Looks to Extend Streak Against UCR, Davis
February 18, 2016 at 5:07 am by Elliot Thornton

After grinding out a 72-66 victory at UC Davis last Thursday, Santa Barbara looks to extend its winning streak to three games with games against UCR tonight and UC Davis on Saturday.

The Gauchos head into the week in fourth place having won three of their last four games to improve to 11-12 overall and 5-5 in the Big West. 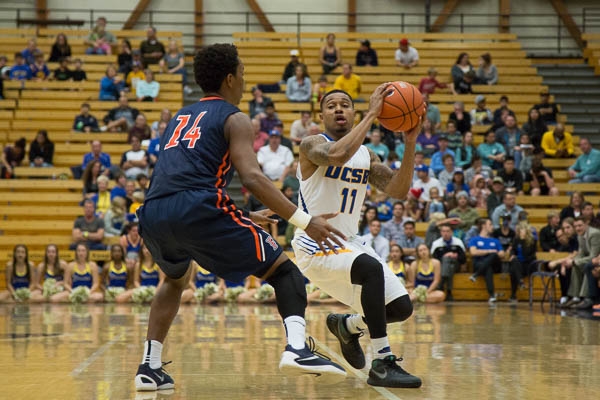 UC Riverside is hoping to overcome its latest three-game losing streak and enters tonight’s game with a 13-14 overall record, while sitting in sixth place of the Big West standings with a 4-7 record. The Aggies’ loss to the Gauchos last Thursday ended their 12-game home winning streak, making them 10-14 overall and 5-6 in the Big West for a fifth place standing.

A total of five players recorded double-figures in scoring in the team’s road victory at UCD. Aside from the 29 combined points that sophomore guard Gabe Vincent and senior guard Michael Bryson tallied home, Bob Williams accredits this victory to a collective team effort from other players on his squad.

“It’s crucial when other guys make contributions offensively for us [because] it turns us into a much more efficient team,” Williams said. “John Green was alive … Sam Beeler was really effective [on the floor], and Eric Childress continues to be money shooting the ball from the three-point line. This gives us a lot of balance because opponents are going to pay a lot of attention to Michael and Gabe.”

Most notably, the Gauchos shot a season-high 23-26 from the free-throw line last Thursday.

Against Riverside, UCSB will have to contain the senior duo of forward Taylor Johns and guard Jaylen Bland. The two are the best frontcourt-backcourt combo in the conference, combining for 32 points per game, Bland at 16.5 and Johns at 15.5.

Johns carried the Highlanders in their 78-86 loss to Cal Poly last week. The senior scored a game-high 25 points in 38 minutes, also tallying his fifth double-double of the season with 10 boards.

While Bland only scored five points in his last match, he and Johns have scored 20-plus or more points in seven games this season.

Graham is coming off a big game against the Gauchos scoring a game-high 19 points while going 3-4 from downtown. The 5-10” floor general has shown signs of being an offensive threat, leading Davis in scoring five times this season including a 21-point outing in its 58-55 win against Riverside.

Big man Josh Fox will try and compliment Graham’s guard play down low in the post. Last year’s Big West Sixth Man of the Year, the forward has been having an unforgettable senior campaign leading all Aggies in scoring with 14.2 per game and field goal percentage with 51.5 percent. Fox has led his team in scoring 10 times this season while scoring 17 or more points in ten occasions.

With regard to last Thursday at UC Davis, a conference win was not the only achievement Coach Williams accomplished against his former team. Coaching the Aggies from 1990-1998, the three-time Big West Coach of the Year collected his 299th win last Thursday.

While this milestone is a notable one, just one victory shy of being the 3rd coach ever in conference to eclipse the 300-win mark, Williams says at this point it is just a number.

“The win at Davis meant a lot to me because it was home for eight years … but I’m just not attached to the number of accumulated wins at this stage in my life,” Williams stated. “Maybe 10 years from now when I’m reading through a scrapbook that will be something that means something to me.”

The Gauchos will face UCR tonight at 8 p.m. UCSB returns to action in the Thunderdome this Saturday, Feb. 20 versus UC Davis, which is set for a 7 p.m. tip-off time.

A version of this article appeared on page 10 of February 18, 2016’s print edition of the Daily Nexus.