The Daily Nexus
Tennis
Gauchos Hope to Continue Success Against LMU & USF
February 18, 2016 at 5:00 am by Xavier Cardenas 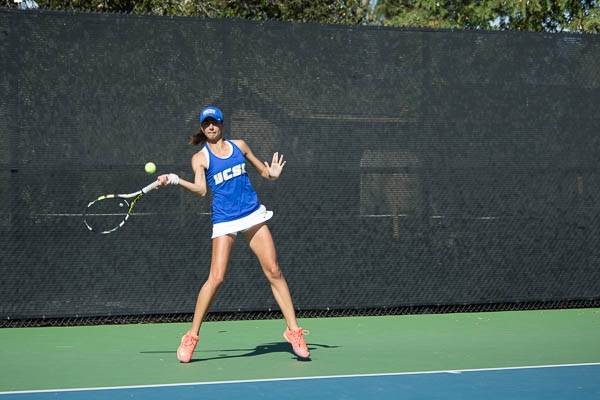 After a successful weekend the No. 68 UCSB women’s tennis team prepares to face Loyola Marymount and University of San Francisco. The Gauchos have started slow but have begun to show signs of improvement after a 2-1 record this past weekend including a historical victory for Head Coach Simon Thibodeau.

The two wins and one loss gives UCSB an overall record of 2-4 and a solid 1-0 start to conference play after defeating UC Davis. Memphis drops to 1-5 on the season, while Washington State keeps its perfect 10-0 record after defeating the Gauchos. UC Davis is now 4-4 after the weekend with a 1-1 conference record.

The Gauchos received their first team win of the season against Memphis by defeating them 4-0. After losing their next match in another close competition versus Washington State, 4-3, Santa Barbara convincingly beat conference rival UC Davis 4-0 to mark win number 200 for the UCSB head coach.

“It just means that i’ve left a mark, on the program as a head coach. It makes me feel a bit old as well. But it’s definitely more credit to all the players, celebration of the players and assistant coaches over the past 16 years.” Said Head Coach Thibodeau on reaching a tremendous milestone.

Although the UCSB women’s tennis team beat the Aggies and the Tigers with a similar 4-0 score to ensure the 200th career win for head coach Thibodeau, the Gauchos dropped another 8 places in the national rankings.

“It would be a nice bonus to be higher ranked and we can always promote better when we are highly ranked, but we have proven to be tough competition… Now we can just focus on getting better,” Coach Thibodeau stated. “A point here and there that would make the difference… Learning more about this team as the season continues and find the right combinations.”

However, the rankings do not properly reflect the prowess of this young roster who is preparing to carry the momentum of the recent wins into the upcoming matches.

LMU has struggled early on in the season mustering a 1-4 start and losing to a plethora of unranked opponents. The Lions’ duo of senior Andrea Crespo and junior Julia Norlin will more than likely have to face UCSB duo Stefani Stojic and Palina Dubavets, who are ranked No. 10 in the nation in doubles.

After the Gauchos face off against the Lions, they will compete against USF. San Francisco is currently winless at 0-6 as they have also played against a number of nationally ranked teams. Losing to No. 38 Long Beach State, No. 41 Dartmouth, and No. 8 Michigan.

Although USF has played against top 50 schools just as UCSB has, they have not been able to muster up any more than a point per match; Whereas the Gauchos have lost by a point in each match.

“RIght now we are testing a few things and see how different people react to different things, we could be 6-0 right now,” Coach Thibodeau said.
Santa Barbara faces off against LMU Saturday and USF Sunday both at 12 pm at the Recreation Center Courts.