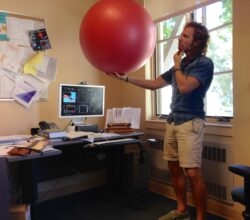 Cantiello and his colleagues used astroseismology observe that stars have strong magnetic fields.

Matteo Cantiello, postdoctoral fellow, Jim Fuller, a professor at California Technical University, and Lars Bildsten, the director of Kavli Institute for Theoretical Physics (KITP), have been “listening” to the stars using a technique called asteroseismology and have identified that stars have strong magnetic fields.

While they aren’t literally listening to the stars, wave detection serves a similar purpose; they provide a way to understand some properties of the stars through sound without actually being able to see into them. This is a similar method that we use to understand our own Earth’s composition (the deepest actual hole in the earth’s crust is only seven or eight miles deep).

Cantiello likened this means of detecting stars to detecting the composition of a watermelon.

Fuller explained that the internal properties of the stars are conveyed through variations in their brightness, which occur at the same frequency of the vibration. These variations can then be translated into comprehendible data.

In 2015, Dennis Stello, the lead author of the Nature paper, came to KITP and presented some odd data he had collected from the Kepler telescope, which jumpstarted this project.

“Dennis was a long-time collaborator of mine and Matteo’s. He was back in town for this program, and that’s when he showed us this new data, the data that pulled us in this new direction,” Bildsten said.

“What was a lot of fun was how quickly Jim and Matteo were able to really have a hypothesis that was testable. It was a very rapid collaboration between theory and observation that is very rare and exciting when it happens,” Bildsten said.

What was this groundbreaking discovery? Magnetic fields.

“There was a distinct class of red giants that pulsate differently from normal red giants. These observations got us thinking about what could cause this strange effect, and, after some preliminary calculations, we realized that magnetic fields must be the culprit,” Fuller said.

Magnetic fields disrupt the way that the stars vibrate because they prevent the normal heat convection within the stars. The stars are essentially boiling, heated from within by a super-hot inner core. The vibrations and light variations all result from this “boiling” action, and the magnetic fields hold the stars together like giant rubber bands that restrain movement and, thus, alter the vibrations.

Magnetic fields may seem somewhat inaccessible or insignificant in relation to our everyday lives. However, a deeper understanding of magnetic fields within our own sun could help scientists better predict solar weather episodes, which disrupt worldwide electronic communication, destroy satellites and which could be even more disastrous if unforeseen.

“Previously, there was no way to detect or measure magnetic fields inside of stars. Now, we can do it for thousands of stars at a time. This will allow us to understand the effects of magnetic fields on the lives and deaths of stars, which has been nearly impossible in the past,” Fuller said.