The Daily Nexus
Volleyball
No. 10 UCSB Faces Pepperdine, Stanford in Pair of Top-Ten Clashes
February 17, 2016 at 3:30 am by Ryan Burns 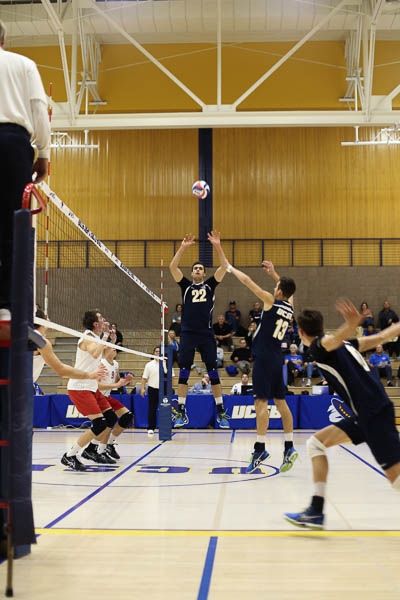 After winning a pair of straight set matches against UC Irvine and UCSD, the No. 10 UCSB men’s volleyball team heads down the coast to No. 9 Pepperdine on Wednesday. Two days later, the Gauchos continue their road trip with an away meeting at No. 4 Stanford.

Heading into this week’s set of matches, Santa Barbara sits at 6-4 MPSF, 10-5 overall, looking to knock off two of the teams fighting to climb up the conference standings as the season’s halfway point approaches.

Pepperdine is fifth in in the MPSF with a 5-3 record, 6-3 overall. Stanford, 8-2 MPSF, 10-2 overall, are at the top of the standings, tied with UCLA and Long Beach State.

“This is a huge week for us going on the road against two very good teams,” said redshirt junior libero Parker Boehle. “We haven’t played them this year, but we are going to prepare the same way as every game, and hopefully come away with two much needed wins.”

Boehle has had a solid season thus far, and is averaging 1.65 digs per set, good enough for second on the team behind senior setter Jonah Seif who averages 1.80.

The two games this week mark the beginning of the toughest part of the Gauchos’ schedule, with all but one of their remaining games coming against ranked opponents. The MPSF has seven teams in the top 10, including numbers one through five, so UCSB needs to grab as many matches as they can before playoffs begin.

“These games are huge for our standing because Stanford and Pepperdine are both ahead of us in the MPSF standings,” Boehle said. “One of our goals is to host a first round playoff game, so beating these two teams on the road would be huge.”

“It felt great to be back in our home gym and to start winning again,” Boehle said. “We were very disappointed with the way we played in BYU, but it was great to see us bounce back and hopefully start another winning streak.”

Much of UCSB’s success in the wins over Irvine and San Diego rested on the performances of a couple of the team’s veterans, including redshirt senior middle blocker Ryan Hardy and redshirt junior opposite Matt Marsh.

“[They’ve] been guys we can rely on to put a ball away at any given moment,” Boehle said. “Being the older guys on our team, they have really stepped up and carried us through a couple games lately.”

Marsh, however has been the breakout performer of the year for UCSB, as the opposite leads the team with 3.55 kills per set. Against UCSD, he also tallied his fourth 15-kill match on the season, after redshirting last year due to injury.

Hardy is known for his contributions on both sides of the floor, averaging 1.18 blocks per set, second best on the team, including three solo blocks. On offense he offers 1.66 kills per set with a 4.88 hitting percentage, the most efficient among UCSB starters. Against Pepperdine and Stanford, the Gauchos will hope they can get the best out their stars as they push on in conference play.

“I think we are in a good spot, in spite of losing more game than we think we should have to this point,” Boehle said. “We have been on the road quite a bit and are still above .500, so I think we are going to be a tough team to beat.”

The Gauchos play at Pepperdine on Wednesday at 7 p.m., and then continue on the road at Stanford on Friday at 7 p.m.