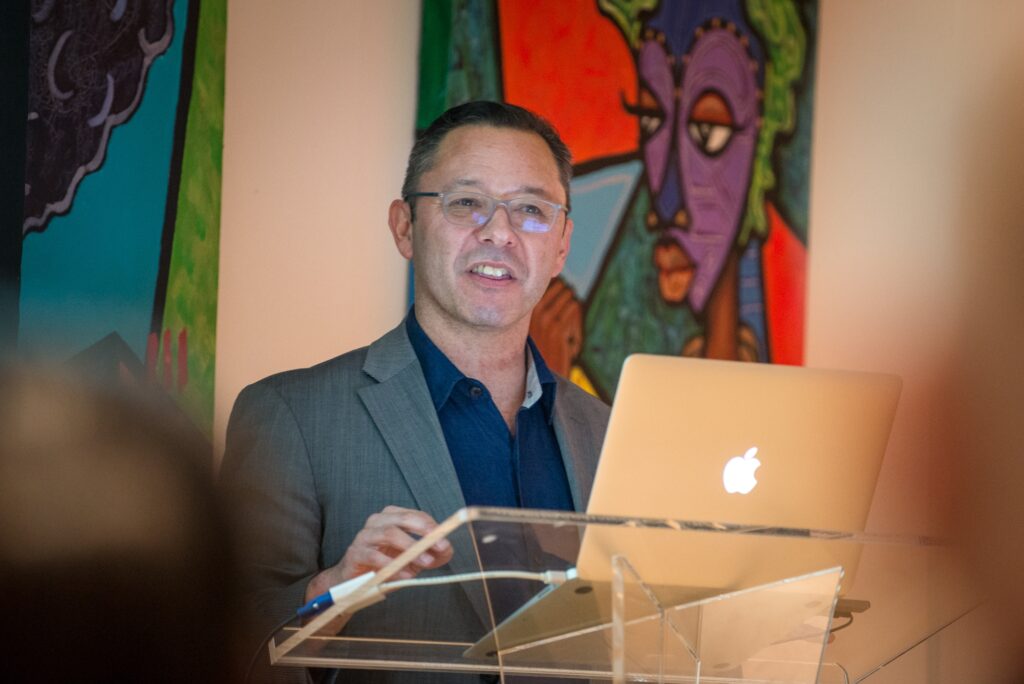 Dr. Curtis Marez looks at how the appropriation of photography, film, video, and other technologies expressed a “farm worker futurism,” a set of farm worker social formations that faced off against corporate capitalism and government policies. Lorenzo Basilio / Daily Nexus

Curtis Marez, associate professor and chair of Ethnic Studies at UC San Diego, presented an interactive lecture about farm worker resistance movements on Tuesday in the Multicultural Center (MCC), based on his book Farm Worker Futurism and Technologies of Resistance.

Marez focused his analysis on agribusiness corporations and their use of media to control public opinion and monitor farm workers. According to Marez, many farm workers have started social justice movements to combat inequalities created by corporate capitalism and government policies. Marez’s talk was the last lecture in the MCC’s Race Matters Series.

Associate Professor in the Chican@ Studies Department Dolores Inés Casillas introduced Marez and said she has appreciated his writing since he was president of the American Studies Association.

“I am excited to see him on our campus,” Casillas said. “Something that is really dear to my heart is that Curtis is the first person whose work I read. I read an article by him, and it was the first time I felt I had to email the person and tell them this was an incredible piece of writing.”

Casillas said Marez’s hometown of Turlock, California is present in his writing and adds to his understanding of farming in the Central Valley.

According to Marez, farm workers have been leaders in visionary thinking about the future of technology, but little is known of their work.

“One index of farm worker exploitation is the fact that they have often been the objects, but rarely the subjects of media representation,” Marez said. “There is a vast archive of photos and films of farm workers, but there are far fewer well-known examples of visual media produced by them.”

Marez said California farm workers unions have organized and created their own media to fight agribusiness domination of visual technology.

“Farm workers have undermined agribusiness representations of workers as mere machines of production, by themselves mobilizing media technologies,” Marez said. “Appropriations of cameras and other visual technologies by farm worker unions have both material and symbolic force, making exploitation visible while simultaneously seizing the means of visual reproduction.”

“We are used to seeing Chavez in a serious mode,” Marez said. “Just remember that he was a person who danced, who had desires for pleasure and pursued those desires I think is something that is important. Part of what I wanted to talk about today is the utopian future orientation of United Farm Workers in what I am calling Farm Worker: Futurism.”

According to Marez, his book is an interdisciplinary study of the material and symbolic significance of technology in conflicts between agribusiness corporations and workers of color in California from the 1940s to present day.

“An important practical and symbolic means of exploiting and disciplining labor [and] agribusiness technology also became the medium and object of struggle over the future of California agriculture and the larger cultural and political context supporting it,” Marez said.

Marez said farm workers have used technology to draw attention to the agribusiness flaws in using mechanized labor, industrial work camps and pesticides in the fields.

“They have also responded to the agribusiness efforts to dominate the visual field by turning a critical gaze on agribusiness in numerous graphics, photos, films and videos, thus decoupling technology from an exclusive connection to patriarchal white capitalism,” Marez said.

Marez showed artwork by members of the Royal Chicano Air Force, a Chicano artist collective, and said the images show flight and the technologies of agribusiness, such as the crop duster.

“All of the images in this project from the Royal Chicano Air Force are from special collections here at UC Santa Barbara,” Marez said. “So there is an incredibly rich collection of visual art related to the Chicano movement right here on this campus.”

According to Marez, farm workers unions have tried to mobilize media technology to open spaces for supporters. Marez said Cesar Chavez’s famous slogans “Si Se Puede” and “It Can Be Done” demonstrate the uniting qualities of the farm worker movement.

“Qualities that resonated with post-war decolonization and third-wordlist movements,” Marez said. “The worlds that farm workers built were shaped by both local and global concerns.”

Sepideah Mohsenian-Rahman, Programmer of the MCC, said she enjoyed how Marez allowed the audience to choose a topic of discussion for his lecture.

“I really appreciated how Dr. Marez was so interactive with the audience and allowed them to choose where to take the lecture. I have never seen anyone do that,” Mohsenian-Rahman said. “It could have been a totally different lecture if people chose different things — I thought that was interesting. I really find his work fascinating.”