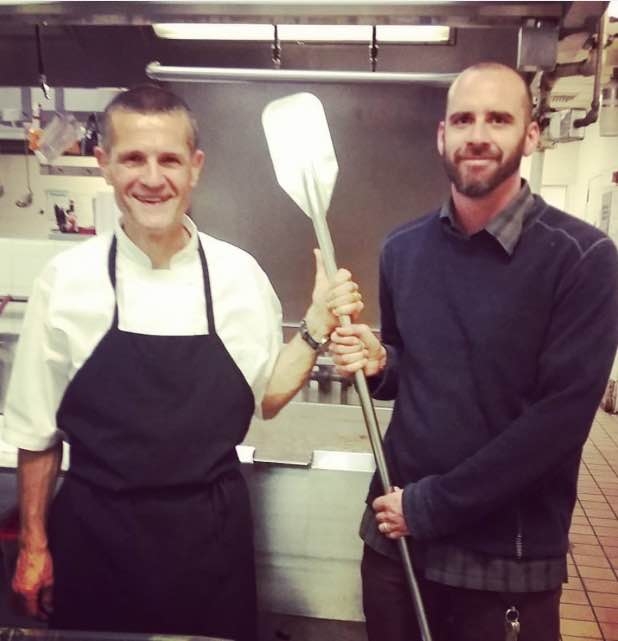 Many people have been enjoying the delicious soups served around campus, created by Chef Mickaёl Blancho, for years. After about three years as the renowned “Soup Guy,” Chef Mickaёl is leaving his position. However, there is no need to worry, everyone will still get to enjoy his culinary expertise as he has been promoted to kitchen manager.

Chef Mickaёl enjoyed his time as Soup Guy as he was able to offer healthy organic vegan options as well as work with local vendors. He really cherished all the love and appreciation he received from students and staff while he was Soup Guy. Chef Mickaёl said “It gives us pride in our job to know that if you put an effort into your job, people respond really well to that.” While he will miss being “fully involved into the cooking of the soups,” he is excited to expand his “skills into other aspects of the kitchen.”

As kitchen manager, Chef Mickaёl says he is “trying to stay more local and stay more organic.” He also wants to “try to come up with new salads, new sandwiches and try to stay ahead of the game.” Although he is no longer the beloved Soup Guy, there are many exciting things to come from Chef Mickaёl.

With Chef Mickaёl as kitchen manager, the more than capable Chef Bernard Gayraud is taking over the role of UCSB’s Soup Guy.

After cooking in Paris for four years and at a family restaurant in Connecticut for 25 years, Chef Bernard’s journey has brought him across the country to California allowing him to begin his career at UCSB. Chef Bernard began working the pasta station at Carrillo and then the pizza station at DLG. Just last December, Chef Bernard received the news that he was selected to become the new Soup Guy and could not have been more ecstatic. While he has big shoes to fill, Chef Bernard is more than ready to take on this new role.

Chef Bernard has already cooked up some delicious soups including a vegan West African nut stew and New England Clam Chowder, to name a couple. He is very enthusiastic about his new job and is a great contribution to the UCen kitchen. All of his delicious soups can be found at one of three different locations on campus: Coral Tree Café, Romaine’s and Courtyard Café.

Chef Bernard says one of the best things about working at UCSB is “working with the students; they keep you on your toes, you really have to watch them, care about them, nurture them and mentor them. They are part of the fabric of this organization here and without them we wouldn’t be able to function.”

Although Chef Bernard and Chef Mickaёl have only worked together for a couple of months, Chef Bernard says he has already learned so much from him, including the importance of being “persistent, consistent, patient and well organized.” With Chef Mickaёl and Chef Bernard both settled into their new positions, expect great things to come out of the UCen kitchen.