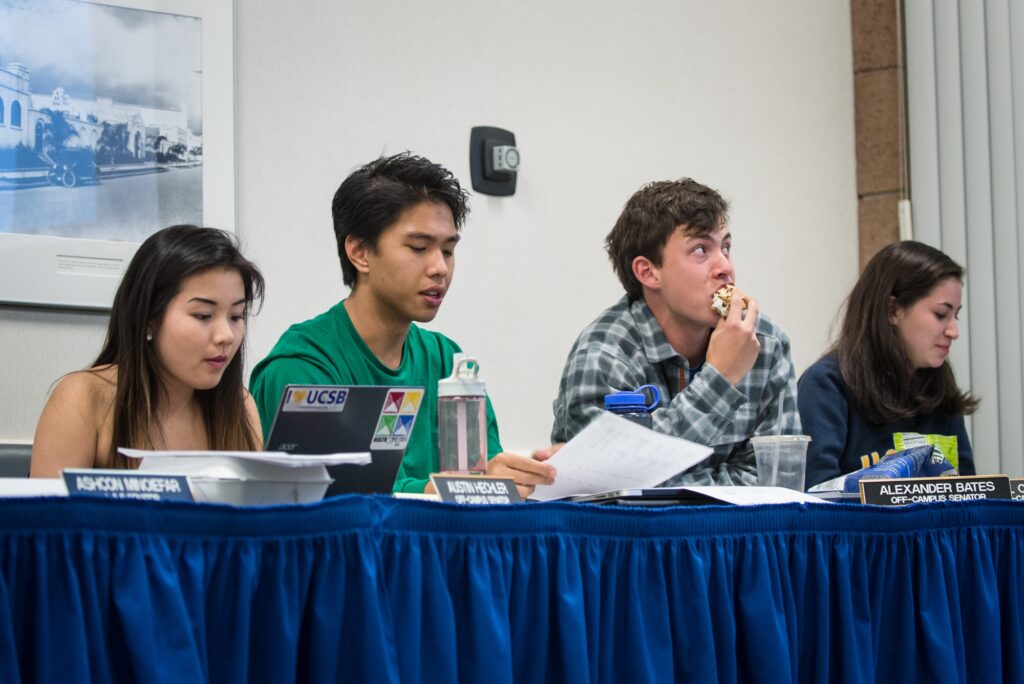 The Associate Students (A.S.) Senate met in the Flying A Room of the UCen Wednesday evening to discuss the creation of new offices, organization funding, free speech issues and a threat of a letter of no confidence from S.C.O.R.E.

Senate funded the Formal Office of Sustainability, the UStudy program and the honorarium of speaker Alexis Pauline Gumbs for the annual Womyn of Color Conference. The senate also sent a resolution to External Affairs supporting the “Idaho stop,” a plan that would allow bicyclists to slow down at stop signs instead of stopping completely. Young Americans for Liberty members addressed free speech issues and a Student Commission on Racial Equality (S.C.O.R.E.) member addressed concerns with proposed committee resolutions.

“Given some of the events happening on campus this year, given [U.S. Customs and Border Protection] CBP being on our campus, given that, from what I hear, funding has just been given to a group on campus with homophobic beliefs last week, we feel that it’s necessary to invest in marginalized groups like women of color specifically,” Rubio said.

A.S. Senate requested ROTC address the academic senate and the Office of the President.

Travis Taylor, UCen representative and fourth-year sociology major, requested $600 to hold UStudy, a program that would allow the UCen to be open 24 hours during finals week. The request was tabled indefinitely by A.S. F&B on Monday.

Morse said there have been recent threats made against him as President of Young Americans for Liberty and Jason Garshfield, vice-president and fourth-year political science major.

“We have students on this campus threatening members of my club with stabbing them because they’re exercising their First Amendment right,” Morse said.

Morse said the Graduate Student Association’s (GSA) statement of solidarity, which condemned hate speech, was not based on factual evidence and used inappropriate language.

“With all respect to the GSA and the fallacious points of view they have presented to this campus, they have no rationality for anything they’re saying,” Morse said.

“If I or any member of my club were to make that same comment to somebody else, there would be an uproar on our campus,” Morse said. “I think this type of language is ridiculous and especially having the Graduate Student Association come in with nothing but rhetoric and attack someone exercising their First Amendment right is ridiculous.”

Garshfield said attacks against people exercising their First Amendment rights will not improve if the senate does not take legislative action.

“As long as we do not pass resolutions supporting free speech, incidents like this will continue to happen because A.S. will not have taken a stance,” Garshfield said. “I think the events over the last several weeks prove the necessity of a resolution.”

“Some of the same senators that were involved in the controversial process of picking recently appointed senators are either chairing or vice-chairing these committees,” Kris said. “These are the same senators who are currently being investigated for potentially violating legal code.”

Kris said the process will not adequately reflect students’ voice in student government.

“It does not reflect democratic process. It makes students who want to participate in A.S. shy away from it.”

Kris said if the resolution regarding the committees passes, various student groups and Office of Student Life (OSL) organizations will release a statement of no confidence toward the senate.

“We believe that a Formal Office of Sustainability is necessary if we want to achieve our campus goals of being carbon-free by 2020 and waste-free by 2025,” Frey said. “All the other UCs have a similar office, so I believe it’s something overdue for our campus.”

A.S. Senate voted 16-0-1 to create a Formal Office of Sustainability

“This is a response to, I believe, Paula coming to senate in her weekly report saying that UCPD was going to begin a crackdown on bicycles running stop signs,” Constantino said, “However, research shows that it’s less safe for bicycles to stop.”

A.S. Womyn’s Commission requested $2,050 for an honorarium for Alexis Pauline Gumbs as a speaker for their Annual Womyn of Color Conference, a request A.S. Finance and Business Committee (A.S. F&B) tabled indefinitely on Monday.

A.S. Senate also voted on Senator Alejandra Melgoza retaining her off-campus senator position despite moving into university housing. In a 11-1-5 vote, A.S. voted for Senator Melgoza to retain her position.