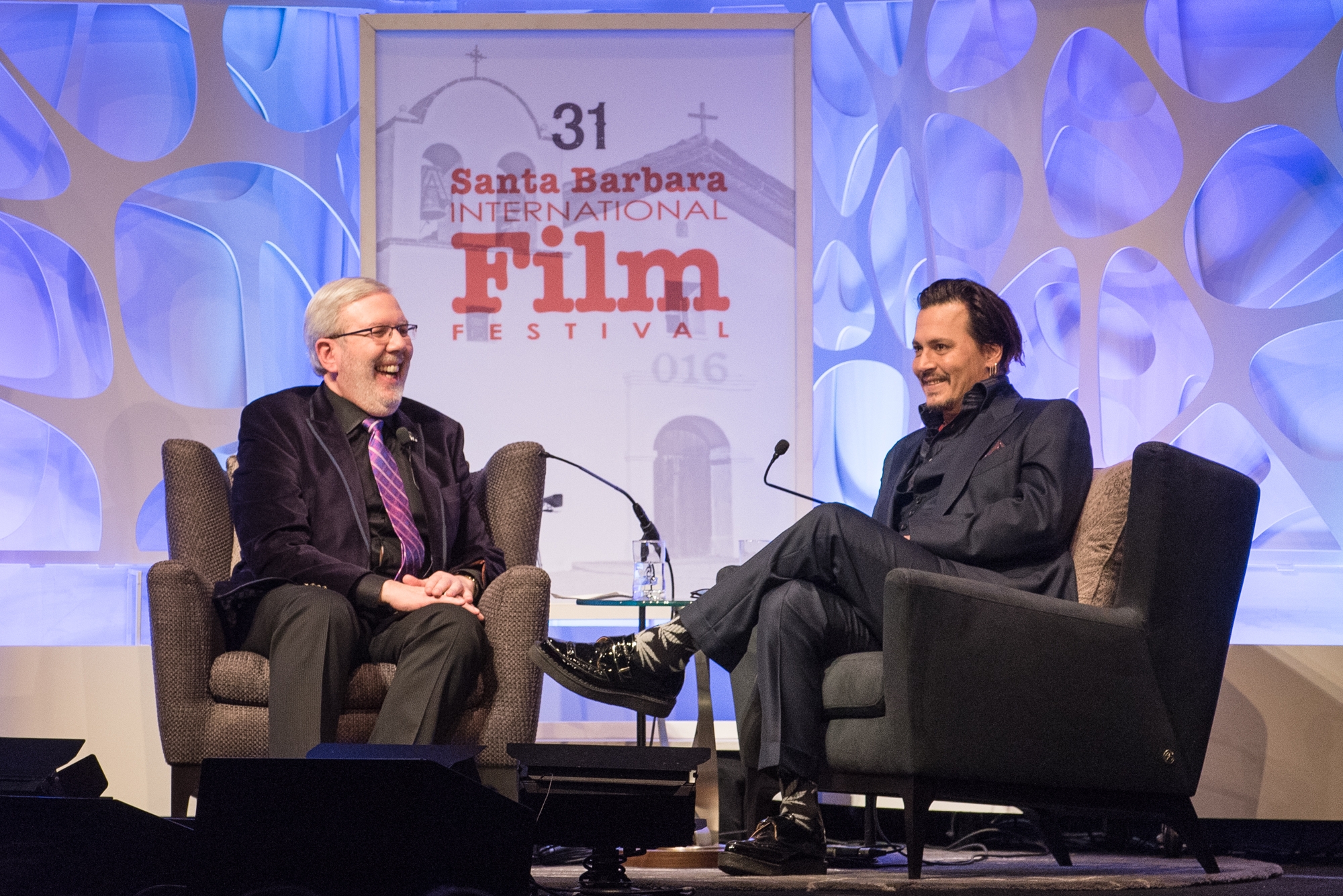 The rumours allegedly began earlier in the day but, by 8:20 p.m. on Thursday evening, people were beginning to worry that Johnny Depp might not show up to collect his Maltin Modern Master award from the Santa Barbara International Film Festival. A no-show would have been uncharacteristic of someone who Scott Cooper, the director of Depp’s latest film “Black Mass,” described as “one of the kindest, most soulful, most generous men that [he knows],” and true to form, Depp eventually arrived. Depp was rushed past reporters and into the Arlington Theatre by his handlers, although he made an attempt to answer a few questions along the way.

This effort on his part was surprising since, as Leonard Maltin, the film critic for whom the award is now named, pointed out at the start of the evening, Depp is notorious for avoiding press. “People have said in the past week or so: ‘Johnny Depp doesn’t do things like this,’ which he doesn’t,” Maltin said, although even without this observation, it would have been obvious to most people in the audience. Depp was visibly nervous and fidgeted throughout the evening with his rings, hair, sunglasses and, most notably, his black and white HUF Plantlife socks. For much of the first portion of the interview, he stared down at his hands, peering sideways at Maltin or up at the audience to see if one of his numerous jokes got the right reaction.

For the most part they did, although some of his more bizarre jokes were lost on Maltin, and this seemed to boost his confidence. By the time Maltin and Depp were halfway through their hour-and-a-half long interview, Depp’s body language had opened up. He was looking at and interacting with the audience more, affectionately imitating former co-stars and, on two occasions, gesturing so enthusiastically that he knocked his own microphone. Depp even joked, un-annoyed, with the one bizarre heckler of the evening, who told the actor to “grow more things.”

“I grow things,” Depp said, adding, “Might not be the same things that you’re growing,” although his socks implied otherwise.

This was in contrast to Maltin, who stayed in almost the same rapt position throughout the interview and seemed a bit awestruck by Depp. He didn’t interject often, content to listen to Depp’s rambling, often inconclusive but entertaining stories and, when he did interrupt, it was to introduce one of the many movie clips that interspersed their conversation or to prod Depp for the end of a sentence. It’s possible that Depp could have used a bit more prodding, however, since the event went on so long that some people started leaving and at least one woman fell asleep in her seat. This could also have had something to do with the sheer number of movies Depp has in his repertoire — over 40 at this point — and Maltin even apologised at the start they could not show clips from all of his works.

Clearly Depp shared the opinion that the interview went on too long, though, since he started rolling a cigarette about forty minutes in and had it in his hand until the end. He may have lost his initial shyness and expressed sincere gratitude that he was “lucky enough to meet [his fans] outside and across the globe” but it remained obvious that he dislikes press and the general trappings of fame. He apologized for his awkwardness at the end, saying “I’m not good at this stuff … Stuttering and stammering — I don’t know, they haven’t really diagnosed it yet,” and mentioned being disguised with prosthetics in order to “take his kids to the London Eye without people looking at [him like he’s] Johnny Depp.”

Still, Depp’s assessment that he is not good at interviews was perhaps too self-critical. Over 90 minutes he walked the audience through his entire career, starting with his stint as a TV actor on “21 Jump Street,” right up to the present day. He related how unhappy he was acting for TV, “where you can only play one character for a long period of time” and end up “being a product,” along with the bizarre ways he tried to get fired, including refusing to remove a turban or inventing a peanut butter obsession for his character. He went on the describe his “instant” connection and three-hour-long conversation with Tim Burton, after seeing him at the coffee shop where they had agreed to meet “with his hair looking like there was an explosion at a hardware store and … chewing on his coffee spoon. I walk into a joint, I know that’s the guy I’m talking to,” Depp said of the encounter, “Even if it’s not Tim Burton.”

In fact, Depp had glowing things to say about everyone he has worked with and even his insistence that Al Pacino is “certifiably insane” was more loving than not. He was particularly emotional about the late Marlon Brando, whom he described as “a hero, a father, a mentor, a brother and a friend.” He again demonstrated his distaste at some aspects of the industry, though, when describing how his agent received a call after his friend’s death, asking if he now wanted to release “The Brave,” the movie he had produced and starred in with Brando some years earlier. Depp was disgusted at this attempt to have Brando “exploited and looked upon as a freak or some novelty,” a sentiment that merited a lot of applause from the audience. That said, the film’s abysmal reception when it premiered at Cannes could also have contributed to this decision, although Depp clearly isn’t afraid of making mistakes and claimed at the end that the possibility that “[he] could fall flat on [his] face” is a vital part of being an actor.

Despite this, the event made clear that Johnny Depp has not only achieved a staggering amount of success but has also done a lot to earn it, including trying to contract heat stroke to perfect the reeling swagger of Captain Jack Sparrow. He remained humble, however, making constant references to the hard work of his agent of 30 years, Tracy, and avoided any hints of pretentiousness. He was particularly flippant about method actors, who he envisaged “at the craft table refusing to eat those Doritos because [they’re] Henry the Eighth,” and said that he knows he’ll see them “in the bar later, because [they’ve] got more problems than [he does].”

A similar humility was displayed by Leonard Maltin who, though not an international film star, had reason to think highly of himself, since it was his first time conducting the Modern Master interview since the award was renamed in his honour and he was described by Mark Scher, the president of SBIFF, as a “rockstar.” Maltin, though, attributed his success as a film critic to having “broke in at the right time” when it was still possible to become established through “old school print journalism,” stating that he “wouldn’t want to be breaking in today … [since] the internet’s changed everything.” Maltin arrived at the red carpet with his daughter as his date and was affable and eager to talk to everyone, which was probably why he got on well with Depp, who could be seen leaning over to talk to him while the film clips were playing.

The interview ended with Black Mass director Scott Cooper appearing on stage to heap more compliments on Depp, who bashfully deflected these by making the “make it rain” gesture after being called generous. Depp, having accepted his award, said he was “lucky to get away with everything [he] got away with over the years” and focused on the “talent … [and] brilliance of men like Leonard Maltin.” Cooper, however, who said he’d “travelled the world espousing the virtues of Johnny Depp,” insisted that “there really is no one like Johnny” and called him “the most overlooked actor of the year” in reference to his Oscar snub. From the response this got from a, by that point, very tired audience, it was clear they agreed.