After being defeated by a game-winning three-pointer in the remaining seconds of last Saturday’s game against Hawaii, the UCSB women’s basketball team looks to recoup on the road at UC Irvine tonight and at Long Beach State on Saturday. 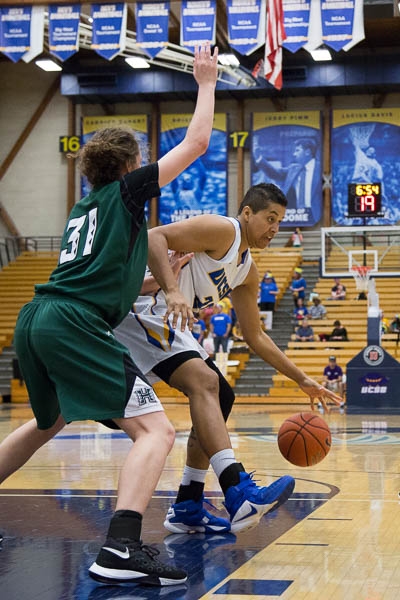 Santa Barbara is 1-3 in its last four games since its 4-1 start to the Big West schedule and currently sits at 8-15 overall and 5-4 in conference play. UCSB ranks fifth in the conference. The pair of matchups will be UCSB’s first time facing either team this season.

UCI will look to end its three-game losing skid in search of its second conference win of the season as the Anteaters are 4-19, 1-8 in the Big West for an eighth place standing. Long Beach State owns the best overall record in the conference at 17-5, and is on a five-game winning streak while sitting in second place of the conference standings with a 6-2 record.

“Records don’t matter — you’ve gotta play,” UCSB Head Bonnie Henrickson said. “We’re going to get pressed in both games this weekend. We’re trying to look at press offense this week leading into it.”

After a 25-point performance in UCSB’s rout of CSUF, Makala Roper seemed to have regained her scoring touch. However, the sophomore guard followed up her performance with six points and a 2-14 shooting effort in the team’s loss to Hawaii.

Scoring in double-figures in six of the Gauchos’ nine conference games this season, Roper has become the go-to scorer for UCSB since being moved to the starting lineup. Including last Saturday’s loss, in four of five games following a 20-plus point performance, she has registered single-figures in scoring.

With the Big West Conference Tournament approaching, Roper is hoping to become a more consistent scorer for UCSB on a nightly basis.

“Taking the game slower and step by step” Roper explained. “Not rushing anything, just letting it flow — it all starts in practice.”

Occupying the Gauchos’ game plan heading into Thursday’s contest is their strategy to combat the Anteaters’ size and depth.

“It’s a lot of dribble moves,” Henrickson said. “It’s not a traditional sit down deep, pivot and score [offense]. It’s get off the block a little bit, face you, rip and drive, back you down and spin. There’s a lot of dribbling involved and its multiple moves. So our bigs have got to stay down and keep their feet alive.”

Despite the versatility within their frontcourt, the Anteaters haven’t had much production offensively this season. Overall, they rank last in field goal percentage at 34.4 percent, three-point percentage at 22.3 percent and their average of 12.1 assists per game ranks eighth in the Big West.

Meanwhile, Irvine’s defense has emerged during its lack of offense. The Anteaters have held three of their last four opponents under 60 points and recently allowed a season-low 50 points in their loss to Cal Poly.

A central figure within UCI’s stout defense has been the play of Mokun Fajemisin. A junior forward, Fajemisin grabbed a career-high 16 rebounds and had two blocks against the Mustangs. Her total of 40 blocks and 2.0 rejections per game leads the Big West. In addition, Fajemisin ranks fifth in the Big West in rebounds per game with a 7.7 average and a total of 154 rebounds this year.

Her blocking abilities have influenced the rest of the team since the start of Big West play as the Anteaters lead the conference with an average of 4.6 blocks per game.

Finding a way to combat UCI’s size will be most important for the Gauchos, who are depleted in size this season.

Closing out UCSB’s road trip is its matchup against Long Beach State. The 49ers are coming off of a 22-10 season last year in which they put together a 15-game winning streak at one point, but faltered during the conference schedule as they finished with a 9-7 record.

In the midst of a five-game winning streak and in second place, the 49ers may be in route to a strong finish to conference play. Thus far, it has been Long Beach’s defense that has led it to such a solid start.

The 49ers’ average of 21.5 turnovers forced per game leads the Big West and ranks 12th in the nation. Despite nearly being upset and allowing 71 points in an overtime win at CSUN, Long Beach State has held 12 opponents to 60 points or fewer and five to under 50 points this season.

Complementing the 49ers’ defense is their shooting from behind the three-point line. They rank third in the Big West in three-point percentage at 32 percent. Most notably, LBSU set a single-game program and Big West record of 20 three-pointers made in its 82-61 victory at CSUF.

Tip-off between UCSB and UCI is set for 7 p.m. tonight at the Bren Events Center. The Gauchos game at LBSU will take place on Saturday, Feb. 13 at 4 p.m. in Walter Pyramid.

A version of this article appeared on page 10 of February 11, 2016’s print edition of the Daily Nexus.