The Daily Nexus
News
DanceSafe Founder Educates Students on MDMA
February 11, 2016 at 5:24 am by Peeka Zimmerman 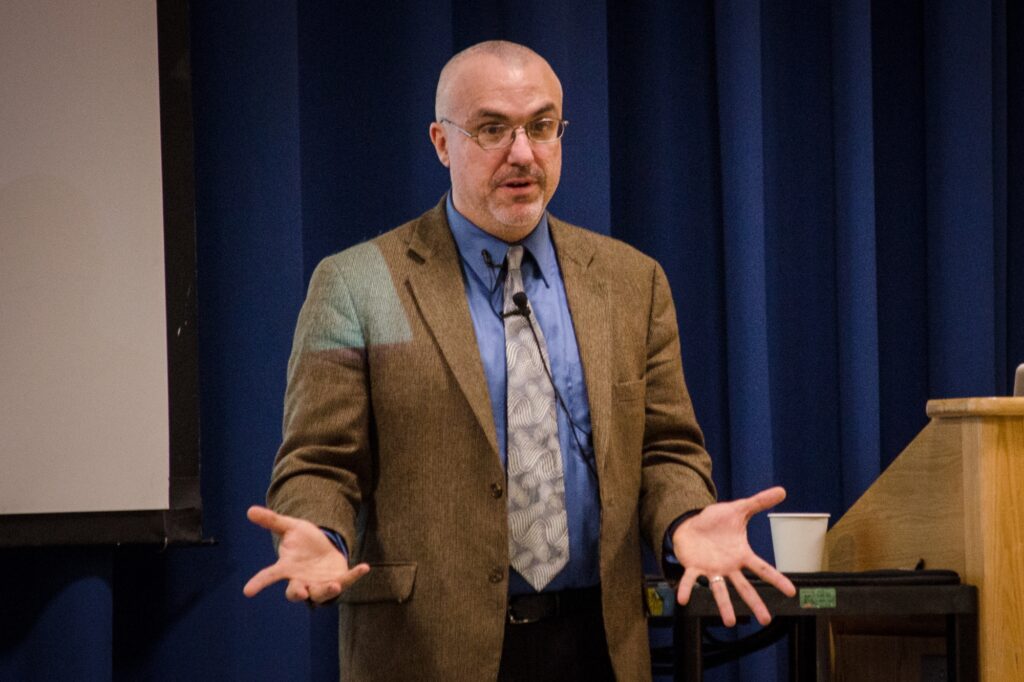 A full house was present at Embarcadero Hall as Sferios discussed the history of MDMA, its therapeutic use and public policies regarding the drug. He offered harm reduction strategies, sold drug testing kits and reminded attendees that no drug use is completely safe.

Marjan Riazi, graduate from UCSB and education and outreach coordinator for the UCSB Alcohol & Drug Program, said it is important students are informed on the effects of drug use and safest possible methods if they choose to experiment.

“We are really excited that you are all here talking about something that is really important and certainly impacts our community,” Riazi said. “We are telling you learn the facts, learn the information … be safe, we just want you to known all the facts. Sometimes people hear things, especially in Isla Vista, that isn’t necessarily true especially when it comes to substances like MDMA.”

Cole Garcia, SSDP chapter leader and a second-year biology major, said the goal of SSDP is to educate students on drug safety and public policies that can be ineffective.

“Within the Isla Vista community we are working on similar things to the Alcohol & Drug Program, so harm reduction through education, but another goal of our group is to get future voters in our political system well educated on the ways that drug policy can be improved,” Garcia said.

Sferios said universities typically focus on abstinence when discussing drug use, but they should instead take the same stance as they have on alcohol and educate students on how to partake as safely as possible if one chooses to do so.

“The university doesn’t say just ‘don’t drink, just don’t do it!’ They say, ‘ok we know some people will and if you do you need to know what you are doing to be safe,’” Sferios said. “That same approach really needs to be happening with party drugs like MDMA and I am really glad to see that Life of the Party is here doing that.”

According to Sferios, prohibition of MDMA creates a more dangerous situation in which safety education is often neglected.

“I realized DanceSafe and other harm reduction programs are more trying to counter the harm that results from our drug policies,” Sferios said.

Sferios said there are beneficial therapeutic uses of MDMA, particularly for treating PTSD, because it releases the brain’s stored serotonin.

“The receptors of serotonin are excitatory and inhibitory in all the right places to reduce anxiety while at the same time making the person very alert and increasing activity in the forebrain where you put things in context and look at traumatic experiences without fear,” Sferios said.

This is not to say that the drug is always beneficial, as 15 to 20 people a year in the United States die after taking MDMA, according to Sferios.

“I was told by Life of the Party that in the last five years there have been 10 deaths on this campus related to alcohol and prescription drugs but none related to Molly as far as I know on this campus,” Sferios said.

Sferios said legal drugs may have a much higher fatality rate in the United States.
“Aspirin kills 400 people a year,” Sferios said.

Users of MDMA should be weary of over-heating and take time to cool down and drink water to stay hydrated, because serotonin-based drugs increase the risk of heat stroke by limiting the body’s thermoregulation, according to Sferios.

“There is a warning label on Prozac for the same reasons,” Sferios said. “Who has ever had a warning label when they bought their MDMA from a dealer that said be careful? No, that is because the drug is illegal and this kind of life-saving essential information is not allowed.”

Sferios said he recommends a regulated dispensary system through which adults could obtain pure, legal MDMA.

“We would reduce the criminal market and reduce access to minors,” Sferios said. “You would still have some adults diverge and buying it and giving it to minors, but you would limit the amount of adults, you limit that process.”

Thank you for this article. One correction, though. Although I am the founder of DanceSafe, I have not been with the organization in many years, and the views I expressed during my talk were mine alone. It would be great if you could fix the headline. Thanks!