The Daily Nexus
News
“Second Class Feminists” Event Fosters Discussion on Feminism and Religion
February 10, 2016 at 5:00 am by Beth Lebens 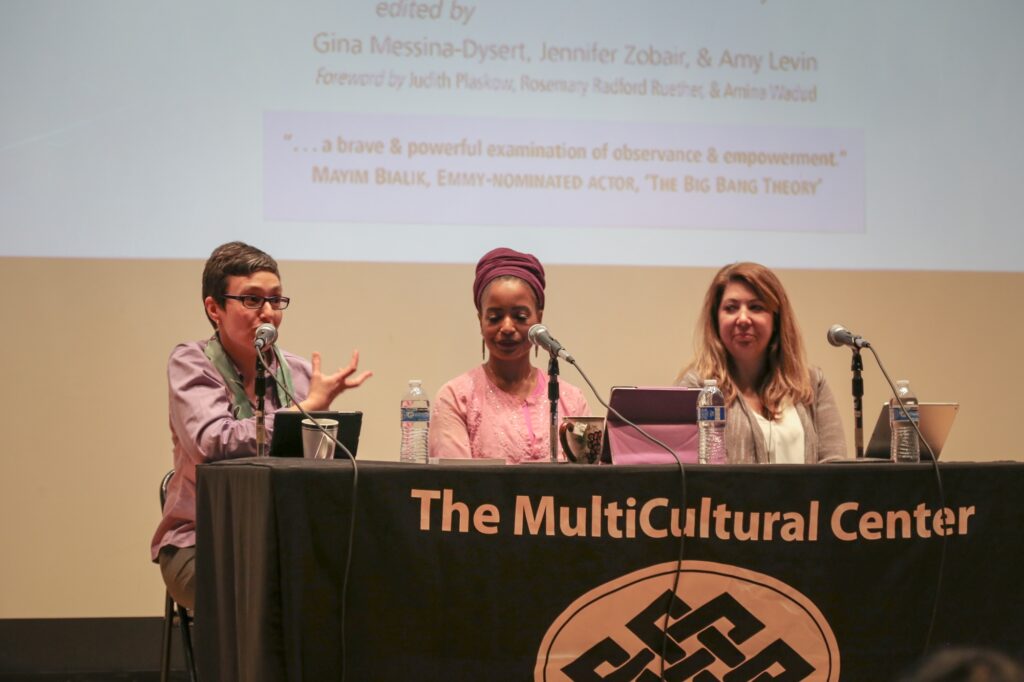 The College of Letters and Science and Department of Religious Studies co-hosted an event Tuesday evening titled “Second Class Feminists?: The Changing Role of Women in Faith Communities” for panelists and audience members to discuss the intersections of religion and feminism and the role of feminists in religions with patriarchal interpretations.

The event, which took place at the MultiCultural Center Theater, featured a panel of three feminist scholars of the Catholic, Muslim and Jewish faiths. Panelists included Gina Messina-Dysert, Dean of the School of Graduate and Professional Studies at Ursuline College, Nia Malika Dixon, author, filmmaker and founder of Audaz Entertainment and Rabbi Tamara Cohen, Director of Innovation at Moving Traditions. All three panelists are contributors to Faithfully Feminist, a collection of 45 essays on feminism in religion, for which they held a signing after the event.

Kathleen Moore, religious studies professor and department chair at UCSB, said although religion and feminism are not inherently opposed, there is conflict generated by people’s expectations that an opposition exists.

“They are not an either-or dichotomy, although the conflict between religion and feminism is real,” Moore said.

“Individuals who identify as religious and feminists receive a lot of judgment, if you will, from both their religious communities and from feminists,” Messina-Dysert said. “I personally find both damaging, but I find judgment from feminists more damaging.”

Messina-Dysert offered her definition of feminism, which she said is inspired by those of Bell Hooks and Rosemary Radford Ruether.

“I like to talk about feminism as being a movement that is focused on eradicating sexism, yes, but all oppression, because you cannot uproot one without uprooting all,” she said.

Religion needs feminism, according to Messina-Dysert, as it is still inundated with patriarchal interpretations that lead to oppression.

“Certainly it is necessary for feminism to be a critical part of religious practice,” Messina-Dysert said. “We need to continue to acknowledge the great oppressions that still exist within religious traditions and find the ways that we can create healing.”

Messina-Dysert spoke specifically about Catholicism to exemplify oppressive religious traditions such as the Vatican’s resistance to reproductive rights and women’s ordination. She said women are a “blind spot” of Pope Francis, who upholds the “theology of complementarity,” which declares a woman’s purpose and value come from her role as a wife and mother.

Such traditions are not inherently part of religion and should be resisted, according to Messina-Dysert.

“Certainly, the foundations of religion are not sexist — it’s the interpretations that are,” she said. “Feminism allows us to work toward disrupting those problematic interpretations.”

Malika Dixon said she believes God gives her the right to stand up for both feminism and religion even though many interpretations hold them in contention.

“Asking a Muslim ‘why are you feminist?’ to me seems kind of misinformed, because to me, as a Muslim, I believe we are automatically feminist,” Malika Dixon said. “The patriarchy that pervades our religious beliefs is not a part of our beliefs, it’s an interpretation.” 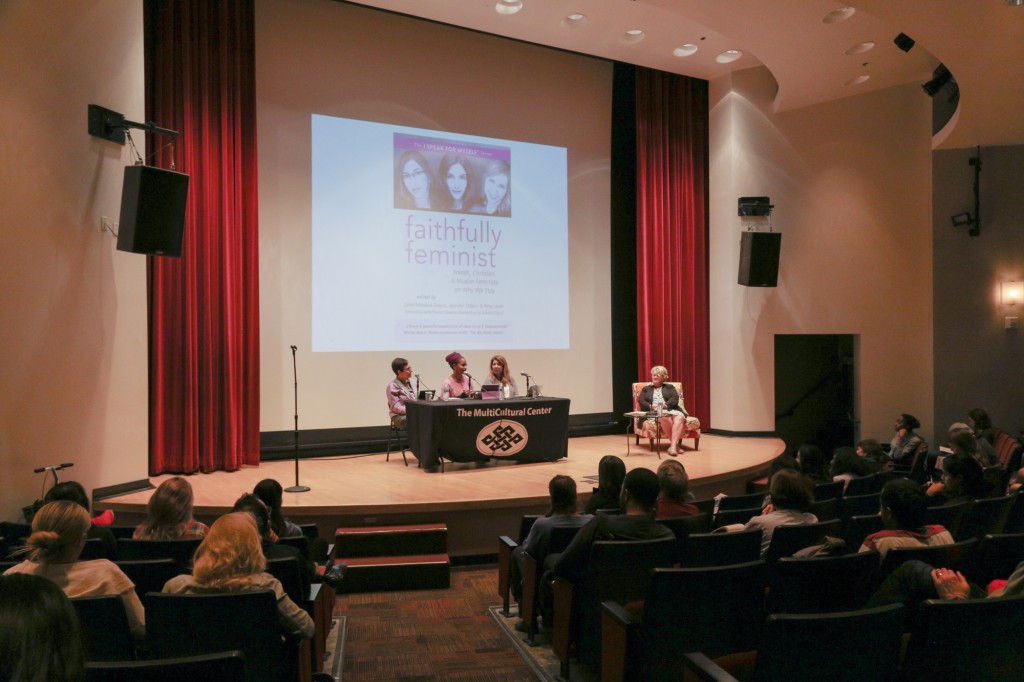 Cohen said Jewish feminists have worked to reverse sexist interpretations, especially in life-cycle traditions such as the unequal status of bat mitzvahs and bar mitzvahs, which she experienced in her conservative synagogue and orthodox school while growing up.

“Girls could have a bat mitzvah, but not equal to a bar mitzvah,” Cohen said. “We could read from the Torah only on Friday night, which doesn’t really count, and not on Saturday morning.”

Cohen said her family chose to have a bar mitzvah for her despite the orthodoxy of her synagogue and school, empowering her to fight for feminist reforms to Jewish tradition.

“I had this sense with the way we did it that if something wasn’t fair out there we could change it,” Cohen said. “It wasn’t many years later that a lot of places began to say, yes, you can do it on Saturday morning, and that change happened because women demanded it and feminists demanded it.”

Cohen said she had a crisis of faith after coming out as a lesbian in college, because conservative Judaism did not allow for ordination of LGBT Rabbis, which lead her to a new understanding of feminism.

“It really shook me to my core and made me think about ‘what is feminism all about?’ and ‘who is it for?’ and ‘what are the limits of a certain feminism and how do we have to push it forward?’” Cohen said.

She said she has struggled to assert both her feminist and her Jewish identity due to the popular notion that they are at odds.

“I wanted to be accepted as what a certain image of what a feminist was and in some sense a certain aesthetic of what a cool dyke was in that moment of the early 90s,” Cohen said. “In some sense I wanted to go underground as a religious person because I couldn’t feel the two together.”

Cohen said she uses “feminine God-language” in order to unravel the core of many patriarchal religious interpretations.

“If our images in terms of the ultimate power of the universe and the language we use is only male … it becomes enshrined,” she said.

Third-year sociology major Evelyn Cabral said she strongly agreed with everything the panel members said during the event.

Cabral said she chose to attend the event because it brought together “two good parts” of her life, referring to religion and feminism.

“Usually it is hard to find events that bring these two parts of your life together. It’s usually either religion or feminism. It’s never both of them together, so that’s why I wanted to come to this event,” Cabral said.

Mariam Tariq, second-year global studies and political science double major, said as a Muslim feminist she related to many of the experiences the panel discussed.

“I’ve been feeling a lot of conflict about what is a woman’s role within religion,” Tariq said. “This event seemed like a good way to listen to scholars and hear what they have to say, and I thought it was really enlightening and it was a reaffirmation of everything that I believe and it’s amazing to see other women of different faiths also struggling with the same issues.”

Tariq said she would like to see more events that combine feminism and faith, which are usually kept in different spheres on campus.

“I think religion on campus is sort of a touchy subject. Not many people bring it up and there’s very limited spaces where you can bring it up,” Tariq said. “I don’t see this much on campus where you get to see women fighting as feminists and for their religions.”

Well this explains everything. Religion and feminism work well together because feminism IS a religion.