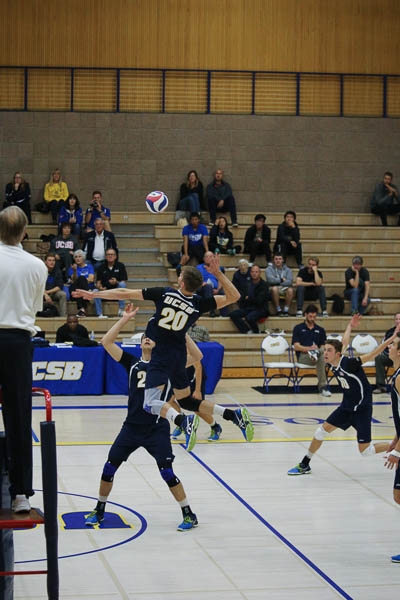 A week after its five-set barn burner against No. 1 Long Beach State, the UCSB men’s volleyball team lost both of its matches to No. 3 BYU on Friday and Saturday, extending its losing streak to three games.

With the losses UCSB fell to 4-4 MPSF, 8-5 overall and dropped to seventh in the league standings. BYU improved to 6-2 in conference, 8-2 overall. Despite the Gauchos’ recent struggles, they still sit at number ten in the national rankings.

Traveling to Utah to face one of the nation’s best in BYU, the Gauchos headed to Provo—which was nearly fifty degrees colder than Isla Vista on Saturday—for back to back games against the Cougars.

In the first match of the weekend, the Gauchos’ first televised match of the season, the visitors started out slow, and never fully got a grasp of the meeting, losing in straight sets (20-25, 16-25, 24-26). The pair of three-point runs in the first set were the longest runs of the night for UCSB.

“We had trouble with serving against BYU,” senior middle blocker Ryan Hardy said. “We weren’t aggressive enough to get them out of system and we compounded the problem with a lot of serving errors.”

Hardy had the best offensive performance on a night when the Gauchos’ offense wasn’t playing at its usual level. The middle blocker registered 5 kills with a .833 kill percentage, but even UCSB’s most consistent players thus far this season couldn’t find their groove.

Redshirt junior opposite Matt Marsh led the team with 8 kills, but also had a team high 7 hitting errors. Senior setter Jonah Seif, who has hardly played a bad pass all year, registered his season-low in assists with 28.

On Saturday, UCSB had similar troubles. The California team doubled BYU’s hitting errors with 16 in another straight set loss (17-25, 23-25, 14-25). Marsh tallied 11 kills in the loss, the only Gaucho to reach double digits in either of the weekend’s matches.

BYU’s home court advantage, known as one of the best in college volleyball, was evident in both matches, with cold weather, thin air, and big crowds all adding to the difficult task of playing against the number three team in the nation.

“The Smith Fieldhouse averages almost 4,000 fans every game, so it’s a really tough environment to play in,” Hardy said.

The two losses to BYU were the Gauchos’ first two straight set losses of the season, but Hardy and his teammates, despite their disappointment with their showing in Utah, are working to get to a point where they can start beating the best teams in the stacked MPSF.

“We have to battle if we want to get ahead in this league and not take any team lightly. The MPSF is very competitive and we need to be prepared every game in order to be a top team.”

Even with its recent trouble, UCSB sits only three games behind conference leaders and national no. 2 UCLA. With a slightly easier pair of home matches this week against Irvine and UCSD, the Gauchos already have their sights on getting back on the winning track, as their two visitors have combined for a 2-14 record in league play.

“The losing streak is behind us. We can only focus on the matches coming up. We’re working hard this week and are looking forward to playing Irvine on our turf Wednesday.”