A season-high of 11 three-pointers made led the UCSB women’s basketball team to its largest margin of victory in a game this season with a 79-49 victory over Cal State Fullerton Wednesday night. Leading the Gauchos’ success from beyond the arc was sophomore guard Makala Roper, finishing with a game-high 25 points— just two shy of her career-high— while shooting 10-18 from the field and 5-11 from behind the three-point line. 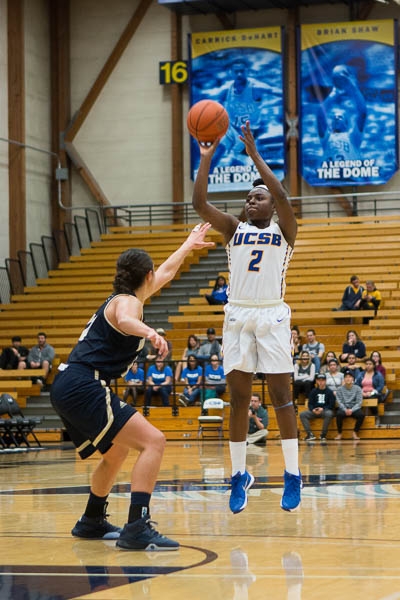 Helping Santa Barbara in its milestone night from long range was freshman guard Coco Miller. All of her shot attempts were from behind the perimeter where she shot 4-9 and concluded with 13 points. Also, the Gauchos tied their season-high total of 27 assists behind a career-high 11 assists from junior point guard Onome Jemerigbe.

UCSB ended its two-game losing streak to improve to 8-14 overall and 5-3 in the Big West. Fullerton’s slump extended to 20-games straight, setting a new school record for the most consecutive losses in a single-season. The Titans are 2-20 overall and remain winless in conference play at 0-8.

Signs of a big night from Roper was evident early as she scored 15 points on 6-9 shooting from the field, 3-5 from behind the three-point line in the first quarter. It was a strong offensive start for Jemerigbe as well as her total of eight point in Wednesday’s game all appeared in the opening quarter on 3-3 shooting.

Santa Barbara’s efficient shooting start to the game resulted in it registering 61.1 field goal and 55.6 three-point percentages, contributing to its 18-6 run to end the quarter with a 28-11 lead.

A slight decline in the Gauchos’ shooting to begin the second quarter influenced the Titans’ 7-2 scoring stretch. A run sparked by a three-pointer by freshman forward Michelle Berry nearly brought Fullerton within a 10-point deficit of the Gauchos’ lead at 18-30.

Although Berry led the Titans in scoring with 17 points, the three-point make in the second quarter was her lone field goal from beyond the arc. Despite entering Wednesday night ranked second in the Big West in total three-pointers made, Fullerton shot 5-13 from behind the three-point line.

Five points in the second period helped Roper end the first half with 20 points as the Gauchos went into halftime with a 46-26 lead.

Yet, it was the Gauchos’ prowess on defense that was most effective. Santa Barbara restrained CSUF to a 27.3 field goal percentage while also holding the Titans scoreless for the remaining 5:50 of the period.

It wasn’t until the fourth quarter in which CSUF managed to outscore UCSB 15-11. Complementing Berry was freshman guard Dani Craig, who finished as the Titans only other player to score in double-figures with 11 points.

But the Gauchos went on to earn their largest lead in the game at the 4:51 mark of the fourth quarter to take a 77-38 lead, eventually defeating the Titans 79-49.

Aiding the UCSB in its containment of Fullerton’s three-point shooting was its conference game-high total of 44 rebounds in which the Gauchos grabbed a conference game-best of 28 defensive rebounds.

Santa Barbara will face Hawaii this Saturday at 2 p.m. in the Thunderdome. The Rainbow Wahine were projected to finish in first place of the conference standings in the Big West Preseason Poll. They currently are tied with UCSB for fourth in the Big West standings with a 5-3 record, but have a chance to end the tie in their game at Cal Poly tonight.