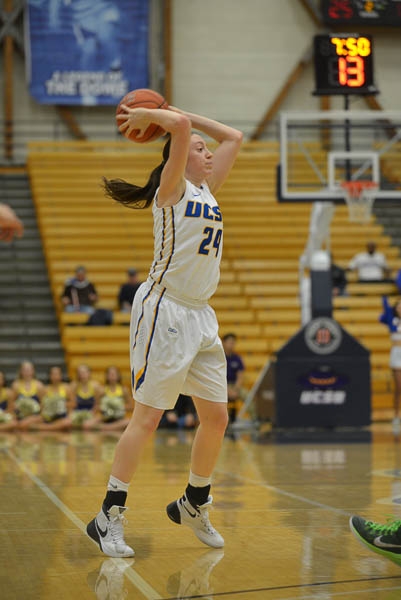 Taylor Farris gets ready to pass to a teammate across the court. Cameryn Brock/Daily Nexus

Although the UCSB women’s basketball team remains in good standing at fifth place in the Big West standings, the urgency is gradually building for a team that has lost its last two games. After a 4-1 start to conference play, the Gauchos are now 4-3 versus Big West opponents and are 7-14 overall.

Santa Barbara will attempt to end its two-game skid hosting Cal State Fullerton this Wednesday. UCSB earned its first road win of the season at Fullerton, defeating the Titans 65-47. Since then, the losing woes have continued for Fullerton as it is 2-19 overall, 0-7 in the Big West and recently matched its school single-season record of 19 consecutive losses in a 79-52 loss at CSUN.

While the Gauchos are not in the predicament of a must-win game this Wednesday, it is a matchup that could help them regain some momentum entering the middle portion of their conference schedule.

Coming off its worst field goal percentage (31.1 percent) and lowest point total (51) in a conference game this season, it can be assured that UCSB is looking to recoup on the offensive end of the court.

Prior to its recent losses, the Gauchos were on a three-game winning streak, shooting 43 percent from the field and averaged 65.3 points per game. While these aren’t groundbreaking statistics, UCSB’s decrease in turnovers helped it to establish a rhythmic flow on offense. It had recorded less turnovers than its opponents on three-straight occasions.

Yet, a slow upward trend in turnovers has affected the Gauchos in their two losses. UCSB hadn’t registered over 14 turnovers since its first meeting at UCR, ending this streak with 16 at UCR and 17 at UCD.

The rise in turnovers can be viewed as a warning signal for a team that once averaged 20 turnovers per game during its non-conference schedule. While the Gauchos have improved in their protection of the ball since the start of Big West play, UCSB’s battle with turnovers begins in its backcourt.

In spite of the turnovers, Roper has been the driving force for the Gauchos’ scoring this season as she leads UCSB with a 12.5 points per game average. She also holds a fifth place ranking in the Big West in three-point percentage at 36.3 percent while her total of 41 three-pointers made this season is just five away from the conference lead. Freshman Coco Miller is just seven threes away from the conference lead of 46 with a total of 39 made perimeter shots on the year.

Not known much as a scorer but rather as a floor general for the Gauchos’ offense, Jemerigbe has emerged with back-to-back games of double-figures in points despite the team’s pair of losses. She notched a career-high 16 points at UCR and had 15 points in the team’s loss at UCD.

Santa Barbara held Fullerton to a 32.7 field goal percentage in its first matchup against the Titans. It was the Gauchos’ defense that influenced their offense as they scored 20 points off 15 Fullerton turnovers.

CSUF will be hoping for an improved performance by forward Michelle Berry after a 6-23 shooting night in the team’s first game against the Gauchos. Though the first-year player concluded the game with a double-double of 14 points and 11 rebounds, Berry was responsible for seven of the Titans’ turnovers.

The latest addition of junior center Dhanyel Johnson to its starting lineup may help reduce the team’s dependence on Berry for the remainder of the season. After a zero-point outing in 15 minutes of play in her first start of the season at Hawaii, Johnson took advantage of her 37 minutes this past Saturday at CSUN achieving her first career double-double with 15 points and 11 rebounds.

Junior center Je Zhe Newton scored a season-high 15 points in the Gauchos’ first bout against Fullerton, but had missed the last two of UCSB’s three games recently making a return at UCD in which she recorded seven points and five rebounds in 16 minutes of play.

Tip-off between UCSB and Cal State Fullerton is set for Wednesday, Feb. 3 at 7 p.m. in the Thunderdome.