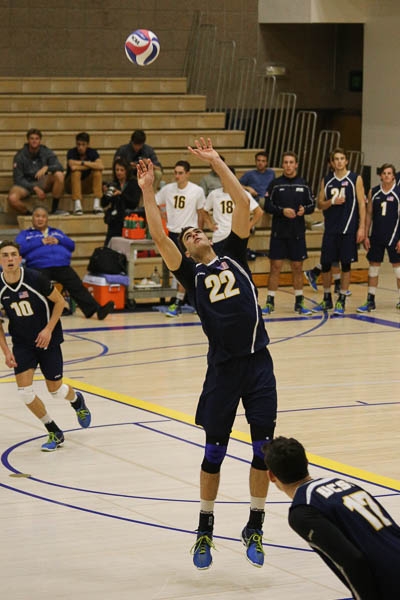 Jonah Seif pushes the ball to the opposite hitter. Jenny Luo/Daily Nexus

The loss ended the Gauchos three-game winning streak, and they now sit at 4-2 in MPSF play, 8-3 overall. With the road win, Long Beach State struck even with UCSB in the conference standings at 4-2, 7-2 overall. The two programs are now in a four-way tie for fourth place in the conference.

Robertson Gym reached full capacity for the first time this year as some fans had to stand in front of the bleachers to enjoy the sell-out clash between the two MPSF heavyweights.

The match didn’t disappoint as the Gauchos and 49ers battled for the entirety of the five-set thriller. UCSB led 11-8 in the final set, but were unable to hang on for the upset, as the ‘Beach’, led by freshman outside hitter TJ DeFalco, finished the game on a four-point run to clinch the victory.

“We really should have won that match, we were up three points late in the fifth set, but we talked after the game in the locker room and agreed that we put together a pretty good effort and there wasn’t much to be upset about,” UCSB redshirt junior outside hitter Jacob Delson said.

Delson struggled in the first two sets of the match, notching four attacking errors and zero kills, but still showed improvements during the second. By the end of the night, the outside hitter had a team-high 14 kills. Redshirt junior opposite Matt Marsh also ended the match with 14 kills.

Delson and Marsh, despite each tallying double-figures in kills, struggled hitting against the tough Long Beach defense, finishing the game with .140 and .143 kill percentages, well below each of their season averages of .257 and .303, respectively.

“We made way too many errors,” Delson said. “We made a ton of hitting errors and some service errors that were pretty crucial.”

Long Beach made its fair share of mistakes too with 26 service errors to the Gauchos’ total of 10. Despite the errors by both sides, the momentum continued to shift between both teams as UCSB gave itself a great chance to win in the fifth set, only four points away from knocking off the No. 2 team in the nation.

“This was a tough loss, no doubt about it,” Gauchos’ Head Coach Rick McLaughlin said. “But you have to experience a few of these to learn how to better deal with that tight atmosphere late in close matches.”

With the MPSF season in full swing, McLaughlin’s team faces a tough string of matches, with five of its next six matches coming against Top 10 teams in the country, including No. 3 BYU this week, followed by No. 6 Stanford, No. 8 Pepperdine, and No. 9 Irvine.

“It’s good we had this game early in the season because we have to learn how to fight and pull out a win in these long matches, and it should really help us out against BYU this week,” Delson said.

The Gauchos host BYU for a two game series on Friday and Saturday at Rob Gym.