The Daily Nexus
Sports
Gauchos’ Cold Shooting Start Allows UCD to Prevail for 80-51 Rout
February 1, 2016 at 5:00 am by Sean White 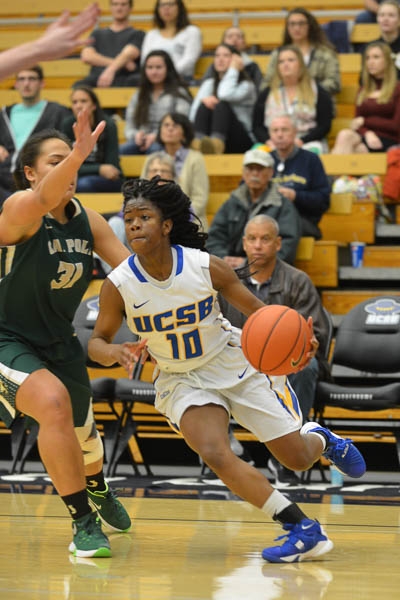 For the first time this season, UCSB has loss two consecutive Big West games. Santa Barbara’s two game slump leaves it with a 7-14 overall and 4-3 conference record, dropping the Gauchos from third to fourth place in the conference standings. UCD improved to 12-8, 5-2 in conference play and are now in a two-way tie with Long Beach State for second place.

Although UCSB tied its conference high in rebounds by outrebounding UC Davis 35-31, the Aggies’ size advantage was dominant in the post as they outscored the Gauchos 36-24 off points in the paint which doubled their total of 18 in the first meeting.

It was an efficient shooting afternoon for UC Davis as it finished with a 59.3 shooting percentage while every player on its roster registered at least one shot attempt. Completing the Aggies’ consistent shooting performance was their success from behind the three-point line, finishing 9-17 from long range.

Attempting 10 of Davis’ 17 shots from beyond the arc were two of the Big West’s top three-point shooters in forwards senior Pele Gianotti and sophomore Celia Marfone.

After earning her first career double-double against the Gauchos earlier this season, Gianotti provided another solid performance tallying a game-high 18 points on 7-10 shooting from the field, 4-7 from three-point range in addition to five rebounds, three assists and three steals. Marfone finished with 17 points on 7-12 shooting while going 2-3 from behind the perimeter.

Supporting Davis’ assertive scoring start was its effort on defense as it held the Gauchos to eight points in the first quarter, nearly repeating its allowance of seven points to UCSB in the first period of last Thursday’s game.

The Gauchos’ off shooting performance affected their leading scorer in sophomore guard Makala Roper as she went 4-14 from the field to conclude Saturday with 10 points, five rebounds and five assists. Yet, providing UCSB with scoring was backcourt leader Onome Jemerigbe. After a career-high 16 points at UC Riverside, the junior point guard followed up with a team-high 15 points as the Gauchos attempted to overcome their out of sync shooting.

But, the Aggies sustained their lead with Marfone at the forefront of their 24-12 outscoring of UCSB in the second quarter. Her 12-point scoring outburst in the quarter helped guide UCD to its 46-20 lead at halftime.

Santa Barbara’s shooting slump was most evident from the insufficient 14 minutes of play that senior guard Jasmine Ware displayed while on the court. After a career-high 23 points at UCR, her nine-game streak of double-figures in points came to an end as she went scoreless on a 0-3 overall and 0-2 three-point shooting effort while committing four turnovers, adding to the Gauchos’ total of 17.

There was a more even exchange of points in the second half as the Aggies narrowly outscored UCSB 34-31 in the final two quarters. Still, it wasn’t until the fourth quarter in which UCSB shot over 40 percent from the field (42.9 percent) but could not supersede the Aggies’ 50 percent shooting in the quarter.

Although Santa Barbara’s best shooting stretch occurred in the fourth quarter, the Gauchos already faced a 18-point deficit entering the period and were eventually defeated 80-51.

UCSB will return home to face Cal State Fullerton on Wednesday and Hawaii on Saturday.