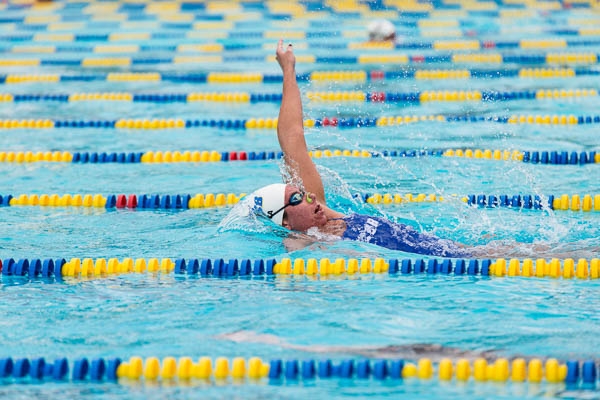 Julia Mikota, with a clear lead, wins the 200 backstroke for the Gauchos. Eric Swenson/Daily Nexus

This weekend, the UCSB men’s and women’s swim teams will cap off the dual meet season welcoming in Cal Poly San Luis Obispo to Campus Pool. The blue-green rivalry will be renewed as the Gauchos host the Mustangs on Saturday.

This will be the second meeting between these two teams as the Gauchos made the trip up to Cal Poly to start off the dual meet season. Santa Barbara’s women’s team came out on top 143-137, but the men fell in their meet 154.5-107.5.

“This is the last dual meet for both the seniors and [Head Coach Gregg Wilson] so we really want to go out and win it for them,” junior Cheyenne Low said.  “It would make the season to send them out on a high note.”

Since that meet in late October, the men’s team has won three straight meets in dominant fashion and will look to keep the momentum going in a rematch with the Mustangs. Since then, the Gauchos have topped UC San Diego 142.5-111.5, UNLV 153-109 and Pacific 166-96.

Although the Gauchos are on a run, the Mustangs who beat them months ago have been on a streak of their own, as they too have remained undefeated since that meet. Cal Poly’s only loss this year came in early October to USC. In their countless wins this season, the Mustangs closest match came with the Gauchos, as Cal Poly has beaten each opponent convincingly all season.

After defeating Cal Poly in the first meet of the season, the women’s team went on to defeat the same foes as their male teammates and have only dropped one meet since then as they fell to UC Davis last week 154-140.

A large part of the success that the women’s team has seen up to this point is due to the talent of junior transfer Cheyenne Low, who competes in the backstroke sprint events for the Gauchos. Low has continuously found herself on the top of the podium in both team and individual events all season long, adding big numbers to her team’s point totals in every meet.

Her success as of late, in Santa Barbara’s meets with Pacific and UC Davis, even earned Low this week’s MPSF Athlete of the Week honors. This is the first time she has been awarded this conference honor and the third Gaucho this season on the women’s side. In the past two meets, Low has helped the Gauchos to a total of four wins as she led the team to two wins in the 200-yard Medley, taking the backstroke leg of the event, and took two wins in the 100-yard backstroke.

“This award makes me feel like I am truly a Gaucho,” Low explained. “I am proud to go out and compete for UCSB.”

Her personal best in the 100-yard backstroke, a time of 54.82, registers as the best time in the MPSF conference and five of her other personal bests in other events rank amongst the 16 times in the conference as well. Low will look to help the Gauchos top the Mustangs again this Saturday and defend her newfound honors.

“Beating our rivals for the second time this season would really give us some confidence going into the MPSF Championships,” junior Cheyenne Low said. “We’ve been swimming really well all year and winning conference is our real goal. That starts with Cal Poly.”

This will be the last meet before the MPSF Conference Championships. The match is set to start Saturday morning, Jan. 30 at 11 a.m. in the Campus Pool.