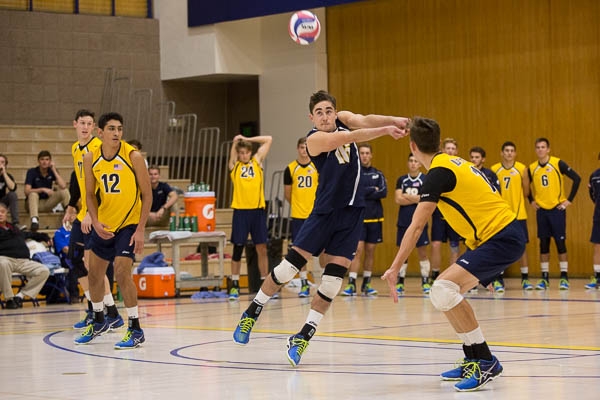 With the win, UCSB improved to 4-1 in league play, 8-2 overall, extending its current win streak to three games. CSUN’s first loss brought them to 2-1 in league, 7-1 overall, ending the Matadors’ longest win streak to begin a season in program history.

“Northridge is a really good team, but they were off their game tonight, but I think part of that was us carrying out what we prepped on for the last two days,” UCSB Head Coach Rick McLaughlin said.

The Gauchos were able to jump out to a quick lead, starting the match on a 15-4 run, handily grabbing the first set.

They registered three aces, including two from redshirt junior opposite Matt Marsh, and seven blocks in the opening set, setting the tone for the team’s assured performance.

“The loss against Irvine was tough, so we knew we had to come out strong in the first game because Northridge was undefeated, and as long as we got on top of them fast, we’d be good,” redshirt senior outside hitter Austin Kingi said.

All year, Coach McLaughlin has been preaching the importance of stability in UCSB’s play, and his players heeded the advice, dic-tating the pace of the match with well-placed serves and solid team defense. The win was the Gauchos’ first straight set victory against a ranked team this season.

“The passing was great and the serving put pressure on them more consistently than what we’ve been doing, and if you win the serve and pass battles, the game’s usually going to go in your favor,” McLaughlin said.

The match marked the first time UCSB played in Robertson Gym since the Asics Invitational, where it finished a perfect 3-0, and McLaughlin’s team entered the match with the intent of putting its recent weeks of practice and league games on display in front of the home crowd.

“We were all really excited to play here because we’ve been playing away, and we got to really showcase our talent and what we’ve been working on,” Kingi said.

The Gauchos showed vast improvements in their play, highlighted by their 24 blocks on the night, four short of their season-high against Loyola (Ill.).

Kingi tallied seven kills, the third highest on the team behind Marsh, 13, and redshirt junior outside hitter Jacob Delson, 10.

“Our blocking really came together, which we’ve been practicing a lot lately, and we’ve been swinging well. We’re just fine-tuning everything,” Kingi said.

Next up for UCSB is perhaps their toughest match of the young MPSF season, a clash with No. 2 Long Beach State tomorrow. Long Beach is 3-2 in conference, 6-2 overall and will be looking to avenge yesterday’s narrow five-set loss against national No. 1 and MPSF leaders UCLA.

The Gauchos split last year’s series with the 49ers 1-1, each team grabbing their wins on the road; both matches ended 3-1. In UCSB’s win, senior Ryan Hardy had a huge night, posting 10 kills and participating in nine blocks.

Tomorrow’s match against Long Beach State will be played at Robertson Gym at 7 p.m.

A version of this article appeared on page 10 of January 28, 2016’s print edition of the Daily Nexus.