The Daily Nexus
Science & Tech
What Is the Cause of Climate Change?
January 28, 2016 at 6:00 am by Mackenzie Gorman 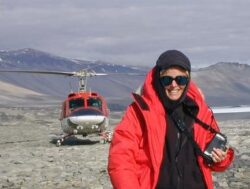 Global warming is often addressed as “climate change” these days, because scientists are attempting to encompass all the phenomena that accompany our planet’s steady increase in temperature. In addition to the warming of the Earth, we are experiencing rising sea levels, changes in rainfall patterns and melting glaciers. The Earth overall is changing drastically, and fast. Methane emissions are a substantial reason for why the globe is warming. However, it is not well understood where all the methane is coming from. A group of scientists studying freshwater bodies in the Northern Poles may have an answer for us.

One area that has been steadily affected by global warming is the northern pole of our planet, such that there is now a much longer ice-free season than there has ever been in the past. What this could mean for the earth has been investigated by a team of scientists, including UCSB Ecology, Evolution and Marine Biology professor Sally MacIntyre.

This group of scientists, lead by Martin Wik, a Stockholm University PhD student, were recently published in Nature Geoscience for their research. This publication tells us that high-latitude freshwater bodies are enormous contributors of methane emissions.

According to MacIntyre, these lakes are often overlooked. However, these areas are climate-sensitive, and changes in the ice-free period mean that they have a longer period to release methane.

According to the research done by MacIntyre and her co-authors, global warming and this longer ice-free period are estimated to increase the lakes’ methane emissions between 20 to 54 percent by the end of this century, if the ice-free period is increased by a mere 20 days. In addition, extended heating and later cooling, along with the rapid mixing of high volumes of water, could mean that emissions will increase even further.

What does this mean for humans and the planet? Basically, it’s time to act, and quickly. We need to reduce human-induced warming in order to prevent the matter getting worse with these northern lakes. Uncertainties remain, as there are many unknown factors regarding what will happen with future warming, but it seems as though if we continue along this path, methane emissions are going to get a whole lot worse. And in turn, that means global warming will get much worse. These research results are a big warning sign that we need to take action, fast.

Professor David Bastviken, a co-author of the paper and a professor at Linköping University in Sweden, understands how much disaster could result if we do nothing.

“This means that efforts to reduce human-induced warming are even more urgent to minimize this type of feedback of natural greenhouse gas emissions. In a sense, every reduction in emissions from fossil fuels is a double victory,” Bastiviken said.

A version of this story appeared on p. 14 of the Thursday, Jan. 28 print edition of the Daily Nexus.