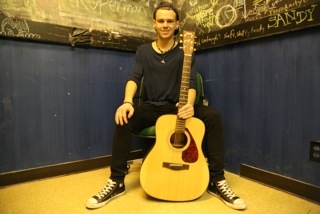 If you’ve ever cruised down Pardall on a Tuesday night, you might have passed a cozy open mic occurring at the Coffee Collaborative, and heard a quick snippet of what sounds like a guitar-percussion compilation straight out of “August Rush.” What you were hearing was in fact David Kuperman, a second year communication and philosophy double major from San Ramon, a slow suburb in the East Bay area. “Kupe,” as most of his friends call him, jams out with a unique style of guitar playing called slap guitar, which essentially incorporates rhythmic and percussive elements into regular guitar medleys.

If you haven’t heard or seen his slap guitar stuff, picture a Jewish curly-haired dude intensely strumming a guitar, simultaneously smacking on it on certain beats and plucking the strings at seemingly random instances to produce a full sound that almost makes you believe there is more than one instrument performing. Or, you could just watch the video of his Batcave session, which works too.

Kuperman sauntered into the Daily Nexus to record a Batcave live session looking like your everyday typical chilled-out rocker — not-quite-tattered-but-still-slouchy shirt, black earrings, a random assortment of necklaces and bracelets, a droopy baseball-esque cap worn backwards and, of course, holding a skateboard in one hand. Kupe is essentially the personification of the word “chill;” he easily lounges on a chair in the office while draping his arm across the back, casually joking around with a lazy smile on his lips. It’s hard to picture him getting worked up about anything, until that is, he picks up his guitar. All of sudden, a wicked gleam overtakes his eyes and he deftly busts out a few complicated-sounding chords while waiting for the videographer to set up his equipment, without breaking a sweat. His fingers seem to have a mind of their own and his gaze flutters from the guitar, to the walls, to the camera, all around as the rest of his body accommodates the melodies emanating from the instrument — complete with foot tapping and head bobbing. And we haven’t even started the actual session yet.

When we finally sat down for an interview, Kupe effortlessly assumed his natural, laidback persona again, sinking into the couch while mindlessly tapping his foot. Again, the topic of music seems to stir him from this relaxed state into something more passionate. Not surprisingly, music has been a most of Kuperman’s life. “Since I was, like, a little one, my dad turned me onto a bunch of music he was listening to at the time, a lot of rock music.” It wasn’t until he was around eleven, after having played the saxophone for a short while, that he first picked up a guitar and formed an informal band with some friends, attempting to emulate popular rock giants such as the Red Hot Chili Peppers and Guns ‘n’ Roses. His interest in slap guitar came a bit later, after seeing a fellow guitarist Andy McKee on the Internet. “I remember on YouTube, there’s this video of Andy McKee playing this song called ‘Drifting.’ It was full of this crazy stuff, he was like slapping the guitar and doing all these crazy rhythmic things and I just thought like, ‘Wow that’s cool.’”

If you watch this video and think, “Man, that looks like such a difficult style of music to perform, it must’ve taken him so much formal training to get the hang of it!” you’d be only partially right. While it did take Kuperman some time to master the style — “It was like learning how to play the guitar again, almost” — he never actually learned how to formally play slap guitar. Instead, he just sat down one day and started messing around with rhythmic and percussive elements until it blossomed into the impressive showing you see here today. “I think it’s just guitar playing with just a little extra something thrown in. Probably just comes from guitar players when they’re not playing with other people wanting to, and being able to, create a full sounding thing by yourself.” Not exactly an easy task, so it understandably took him a while to figure out the “rhythmic difficulties” involved.

Foot tapping away, with what I now began to realize was a characteristic wild look in his eyes, Kupe began to excitedly tell me about how slap guitar style “opened up a new door of guitar playing.” He continued, “people find themselves so limited on one instrument, like you can only do this or this, standard stuff. But like, you know, this is an instrument and when it comes down to it, this is a thing that makes noise and sound and you can get so much out of it.”

Luckily, the smaller, raw nature of the Isla Vista music scene, which welcomes talent of all shapes and sizes, suits David’s interests just fine. “That’s my ideal show: dingy show, relatively small place, but packed with people because then there are no rules and, like, it kinda has more character to it.” What he brings to I.V. is a unique, bluesy slap guitar style that can liven up even the dullest open mic or small house show. But that’s not the only form of music Kuperman hopes to perform here in I.V. “I’m forming a band right now, and this is me playing electric, which is very different from my acoustic playing. Basically my other musical half, my like, blues-rock alternative kind of playing — very loud and crude, but like energetic stuff.” This band will definitely bring an exciting underrepresented blues-rock sound to I.V. — once he finds a drummer that is, which has been the biggest roadblock he’s faced so far.

Between electric guitar and acoustic slap guitar, it’s clear to see that, while slap guitar is what David calls, “my core, that’s my soul, some of the music I write that I really call my art,” he prefers performing his electric rock music. “It’s the performance, it’s the energy, like, it’s rock and roll, that’s more what it’s about.” Don’t worry though, you’ll still be able to catch Kupe jamming out with his slap guitar music around Isla Vista (and this Batcave session) pretty regularly, but he’ll soon be playing some loud, bluesy, alternative rock music with his to-be-determined band. If you just can’t wait, look his name up, “David Kuperman” on SoundCloud, or search him on YouTube to listen and watch a few of his original song compositions. Besides that, catch him tearing up the streets of I.V. at a house show near you soon enough, or pop into an open mic whenever you’re free — chances are you’ll spot him going nuts on a poor acoustic guitar, delivering some interesting and rock-inspired slap guitar melodies.