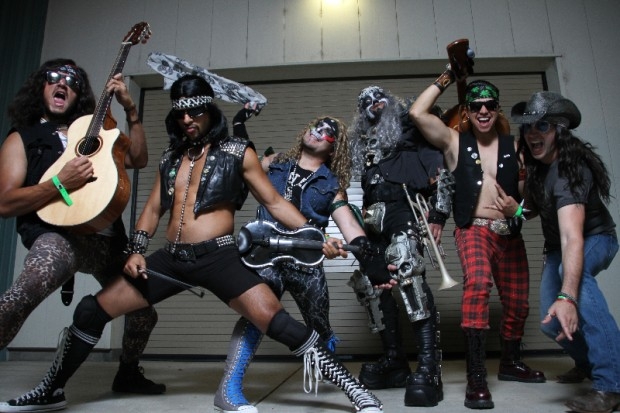 If you smashed together a circle marked “black metal,” and another named “mariachi music,” the resulting Venn-diagram intersection would be labeled “Metalachi.” The band of the same name takes that premise of genre-blending and runs with it. Metalachi is comprised of (according to them), five identical quintuplet brothers who spent the first 14 years of their lives wandering from Veracruz to Juárez on donkey-back. Upon stumbling into Texas, the brothers unearthed a Black Sabbath record and a passion for music was born.

Actually, if you look at Metalachi’s website, you’ll find that almost every detail of their biography entails fairly fantastical boasts. Their mythology ranges from guitarist Ramon Holiday’s claim to have lost his virginity to a burrito at age 11, to trumpeter El Cucuy’s vow to forge a “mega trumpet” out of his 2,000 existing trumpets (it will allegedly have the ability to rob Lady Gaga of her power as well as destroy entire cities).

If you’re interested as to whether the band was actually abandoned by their sumo-wrestling mother after a horse-tranquilizer addled pregnancy, then you should come to the Velvet Jones this Friday, Jan. 22 at 8p.m. There will be no shortage of theatricality. The band’s outfits range from simple black crop-top and face paint combinations, to full-on KISS replica costumes. Their music itself involves mariachi covers of famous metal and rock songs. The band mixes classic rock staples like Led Zeppelin’s “Immigrant Song” with heavy metal hits like Iron Maiden’s “Run to the Hills.” Metalachi boasts guitars as befitting of typical mariachi music, complementing these with trumpet, violin and guitarrón (big Mexican guitar). While their style remains firmly mariachi, they also manage to replicate some metal sounds with acoustic instruments.

Metalachi clearly belongs in a pantheon of musical hybrids along with Beatallica (Beatles and Metallica mashups) and Tragedy (metal renditions of Bee Gee’s songs). If you need any more convincing, feel free to turn to the group’s Instagram page for a picture of fat guy sliding down a stripper pole in a speedo. Or check out their Facebook page to learn that their interests include origami.

If you have ever wanted to hear “Crazy Train” on the guitarrón from a man who purports to have falsely believed himself a midget until age 23, then come downtown this Friday to hear Metalachi. Make sure to bring a sombrero and copious make-up. Whether band member Warren Moscow will bring his vintage dynamite collection remains to be seen.