The weather is colder and your urge for a warm bowl of soup could not be any stronger. While the convenience of heating up some canned soup or instant ramen can sometimes be far too tempting, there is somewhat of  a reward in gathering ingredients and bringing them up to a boil yourself.

Whether it’s the sour, yet savory sinigang in the Philippines, the aromatic and rich tom kha gai in Thailand, the spicy silken tofu laden soondubu jjigae in Korea or the complex curry laksa in Singapore and Malaysia, one will find that soup is, without a doubt, a culinary staple in Asian culture. They’re served as early as breakfast and eaten as street food late into the night. They can be filled with a variety of combinations of meats, seafood, vegetables and noodles. Below are three familiar Asian soups that can easily be thrown together. 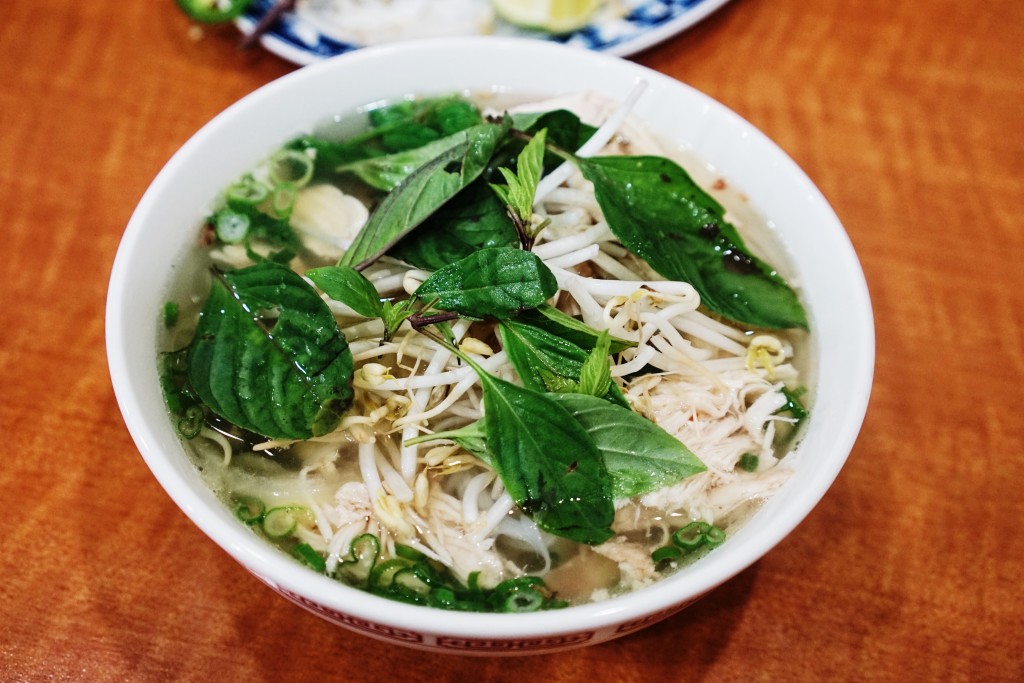 Pho is perhaps one of the most, if not the most, popular Vietnamese dish outside of the country. While we may enjoy our pho on a night out, it is how many Vietnamese start their day. Chances are, you’ve been corrected on the pronunciation of the soup’s name. In short, between “fuh” and “faux,” “fuh” is the way to go. Another mistake people make is that the name refers to the flat white rice flour noodles called banh pho, rather than the soup. But again, despite that, the clear broth is what makes it. In the broth goes the delicious pieces of meat, herbs, vegetables, and condiments.

Broth: ­ Seemingly simple, the broths are usually made by beef or chicken and enhanced with spices like cinnamon, anise, cardamom and cloves, as well as some ginger and shallots.

Ingredients and Toppings: ­ For meat, you typically get beef or chicken. Being a very green country, pho always includes thai basil and bean sprouts. Slices of jalapenos and lime are also popular. Also commonly found in pho are green onions, culantro and coriander.

Condiments: ­ Many restaurants will have sriracha, hoisin and fish sauce at the table readily available for you to squeeze into your bowl. To best enjoy your pho, refrain from using the condiments unless you really need to. Good broth is good broth and typically won’t need help. If you do want to taste the hoisin and sriracha, the correct way would be to put have them on the side to dip your meat and ingredients in.

How to Eat: ­ When you get your bowl of pho, the thai basil, bean sprouts, jalapenos and lime will be on the side. Add them in, mix it all up, sip the broth and enjoy. 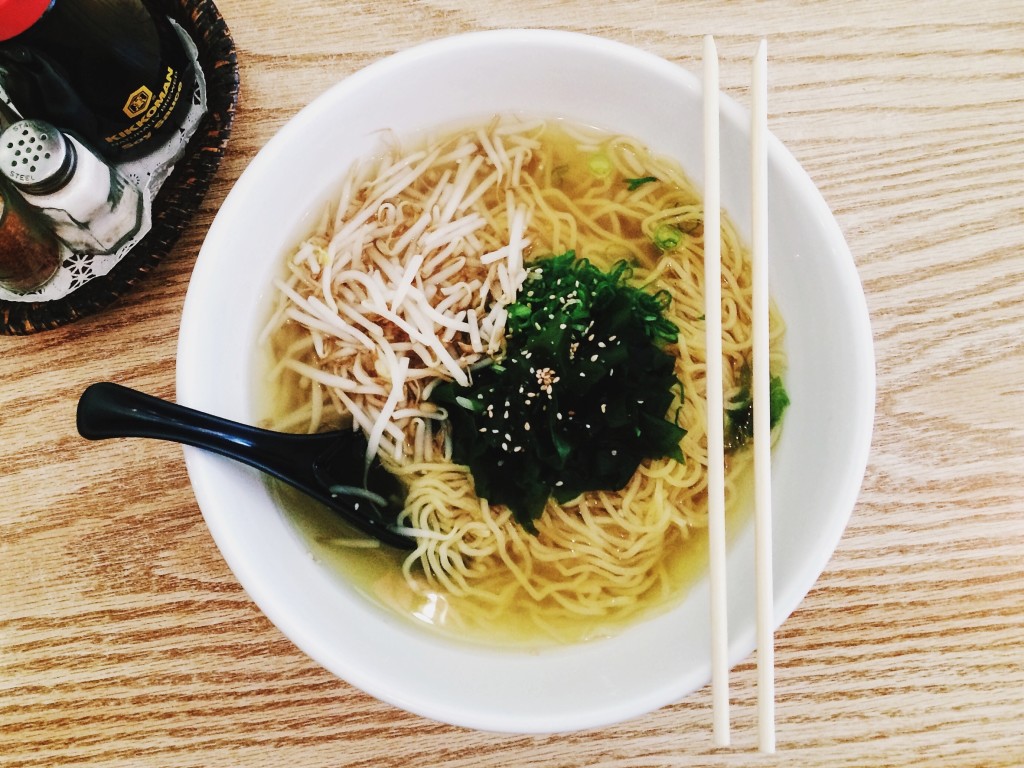 Spaghetti is to Italy as ramen is to Japan. It is the go­-to Japanese comfort food for college students on a budget and ramen aficionados alike. “Ramen” refers to the noodles with ‘ra,’ meaning pulled, and ‘men,’ meaning noodles. While it can easily be recognized as a national dish of Japan, ramen takes its roots way back to China where alkaline noodles were stretched and folded until thin, similar to ramen noodles. Since coming to Japan, ramen has received much popularity as a Japanese dish; especially with the invention of instant ramen in the 20th century, now the country’s greatest export. Like spaghetti, ramen can be served in a number of ways, with each part having different variations that can differ based on preference and/or region.

Broth:­ Broths are described as being either light (assari) or rich (kotteri). Whether they are light or rich depends on the base which range from bones of chicken, beef, pork and fresh fish. Broth bases of seaweed and seafood are not uncommon. Going deeper into the variations are the types of seasoning used to flavor the soup which usually differ by region. The three typical seasonings are shio (sea salt), shoyu (soy sauce) and miso (made of fermented soybeans).

Noodles: ­ Even with noodles there is a variation depending on preference and availability. At the top of the ramen noodle podium are fresh noodles, followed by dried noodles, then instant noodles. Depending on what one prefers and how the noodles are prepared, ramen can also range in texture from soft to firm.

How to Eat: ­ There really are no hard rules when eating ramen. Many would say to eat with chopsticks in one hand and the soup spoon in another, but a rule that almost all ramen experts would say is to eat it fast and not let it get cold. And yes, slurping is encouraged, especially if the ramen is very good. 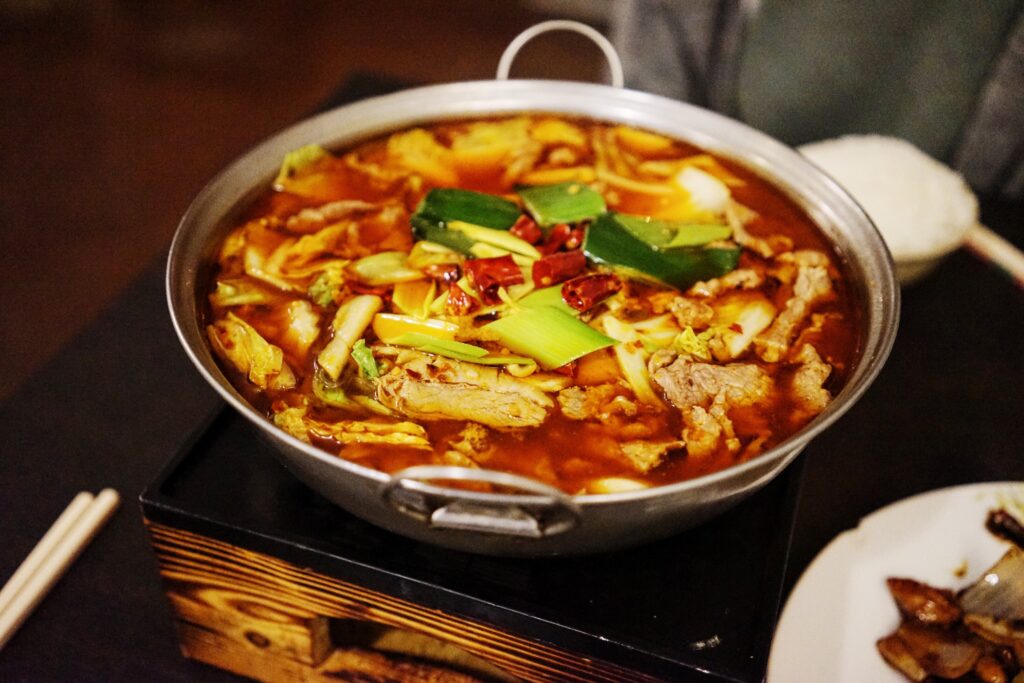 Hot pot is very simple and is widely enjoyed throughout Asia, especially in China. There’s the pot, the hot broth, noodles and choices of meat, vegetables and seafood ready to be cooked in the broth. What makes hot pot enjoyable is the amount of freedom you have to just cook what you want. It’s an interactive soup that can really be properly enjoyed in a group or friends or family. With hot pot, it’s the more the merrier:­­ more ingredients, more people.

Ingredients and Toppings: ­ All types of meats and seafood are welcome whether it is beef, lamb, chicken, pork, shellfish, fish, squid, fish cakes, fish balls or a combination of them all. Vegetables like watercress, lettuce, daikon, carrots, potatoes, baby bok choy, mushrooms, corn and soybeans/tofu are all great to add into hot pot. It really is just anything you want.

Condiments: ­ Soy sauce, sesame oil, chili oil, chili flakes and even egg yolk are all options for dipping in your hot pot ingredients in.

How to Eat: ­ The rules are simple. Add in what cooks the longest first, and the shortest last. Again, hot pot is best enjoyed in a group, so invite friends over and have them sit around the pot and enjoy.